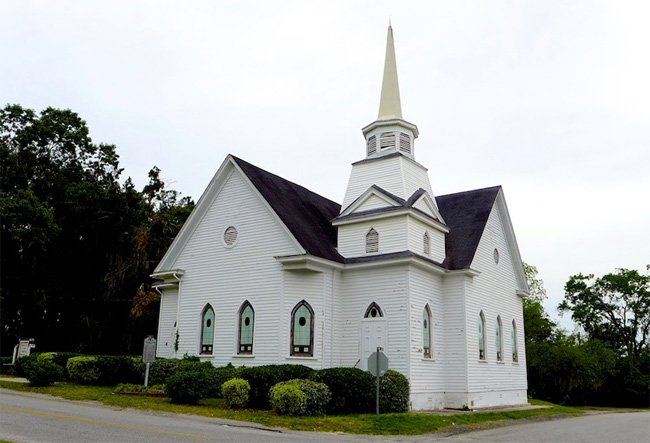 The original Barnwell Baptist Church was used by Bethlehem Baptist Church until 1898 when the former church was demolished. The current church was erected on the same site soon afterwards. Salvaged materials from the original structure were used in the construction of the new church.

In the early 1900s Bethlehem’s congregation was instrumental in the founding of Morris College in Sumter and the establishment of a high school for African American students in Barnwell.

Because it is a well-preserved example of the independent black churches that proliferated in the South after the Civil War, the church is listed in the National Register of Historic Places:

Bethlehem Baptist Church is a vernacular interpretation of the Victorian ecclesiastical architecture of the last two decades of the nineteenth century. Built circa 1898 by members of the congregation, the eclectic structure features both Queen Anne elements and Gothic detail. Architectural features of note include the steep, cross gabled roof with boxed cornice and returns; the asymmetrical massing of the towers; the 6/6 Gothic center pointed windows; the auditorium plan; and the tongue and grooved deep coved ceiling of the interior. The cupola originally featured a steep, tent-roofed spire; however, it was removed and replaced by the present cupola during the 1940’s.

Exemplary of the widespread growth of independent black churches, which occurred in the South during the post-Civil War era, Bethlehem Baptist Church has played an important part in the religious and educational life of the black community of Barnwell. The congregation formed in 1868 as an offshoot of the Barnwell Baptist Church located at the same site and the old building was sold to the new congregation. After the floor caved-in around 1898, the 1829 building was demolished and the present Bethlehem Baptist Church built in its place. The brick veneered church rectory is included within the nominated acreage.