It is appropriate that the Circle Theater in Barnwell serves as a place where stories unfold on stage, as the building is a story in itself. Now the home of the Barnwell County Performing Arts Center, this theater resembles a church because it was originally Barnwell Presbyterian Church. Construction on the building began in 1840 at the current Barnwell Presbyterian Church’s Franklin Street address. It was completed in 1848. 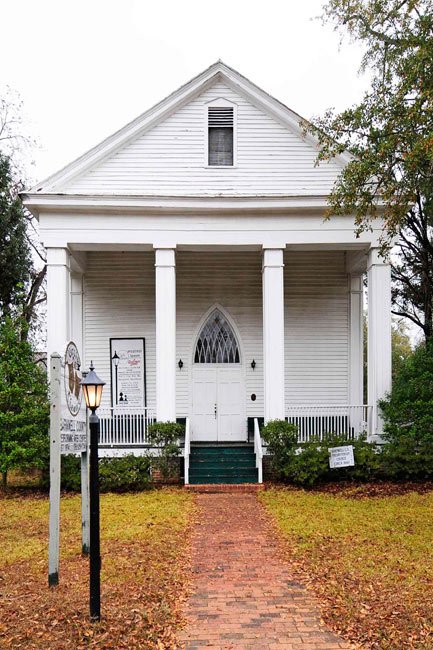 In 1865, near the end of the Civil War, Federal troops burned much of Barnwell, including the courthouse. From that year court was held in this building – then Barnwell Presbyterian Church – though for how long is unclear. Eventually worship services resumed, but by the 1960s, the congregation decided to build a bigger church. In 1967 the Barnwell County Historical Preservation Commission was created out of concern for saving this historic church, and the building was moved to its current Academy Street location. A new church was built in its place, and the Barnwell Performing Arts Center, home of the town’s Circle Theater amateur stage group, made this building its own in 1974.

This simple former church was once adorned with a bell tower that was lost to lightning in 1891. It is listed in the National Register:

The present church was built ca. 1848 of Greek Revival design with Gothic details. The pedimented gable roof is supported by four large square columns that rest on brick piers. Each window is crowned by a lancet arch with tracery of wood and glass. The church was apparently constructed by a local craftsman and has hand carved interior woodwork and a slave gallery.