This church in the Sandy Run community near Gaston serves one of the oldest Lutheran congregations in the state. Prior to 1751, members of the congregation settled about three miles from here. Their settlement was located at the mouth of Sandy Run Creek along the west bank of the Congaree River. The group later moved inland and built a church near this site, which was followed by a third church on the site of the present cemetery. The third church served as a “union” church, or a church used by several denominations. It contained a slave gallery, which was removed in 1889. 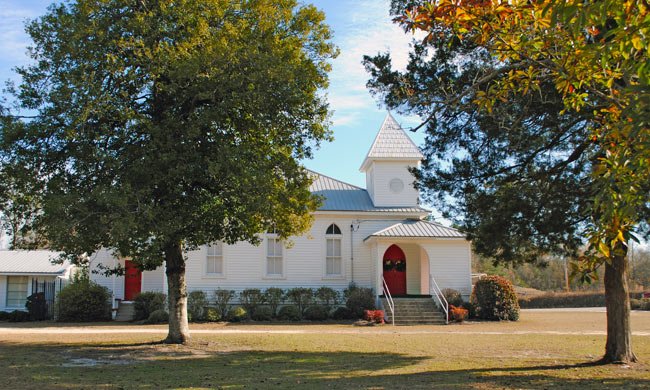 The third church burned in 1917 during a worship service, and lore claims that the minister, the Reverend Robert Elford Livingston, calmly exited the church with his parishioners, carrying the pulpit Bible under his arm. Members were able to save the pews, the organ, and a silver communion set that had been buried for safekeeping during the Civil War. Today the communion set is on display at the Calhoun County Museum. The church quickly rebuilt, and the first worship service in the new sanctuary, seen here, was held in 1918; the church was dedicated the following year. 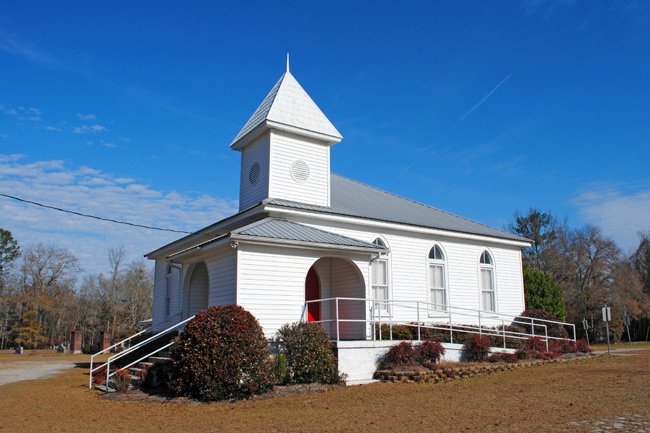 In 1774 there were only two ministers serving this part of South Carolina, one of whom was the Reverend Lewis Hochheimer. The Reverend Hochheimer ministered to this congregation. The church was finally incorporated in 1788 as the German Lutheran Church of Salem, on Sandy Run. Today the church is known simply as Sandy Run Lutheran Church. Considered a significant church in the state, the South Carolina Synod has met here several times. 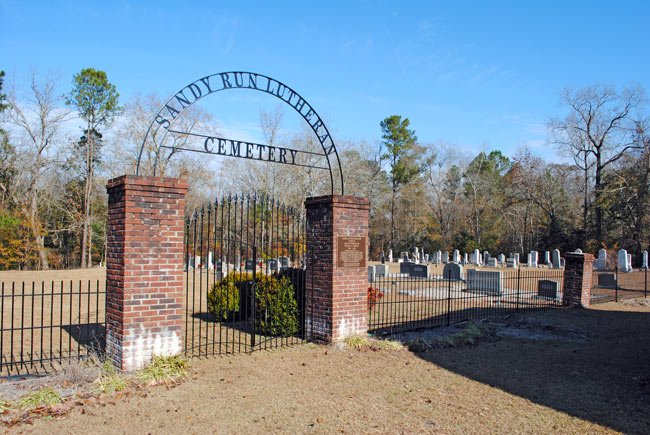 The cemetery of Sandy Run Lutheran Church is the resting place of local families such as the Geigers. Though Herman Geiger – who built the first floor of the nearby Red Store in 1819 – is not interred here, many of his family members are. The store became known as the Assmann Store when it was bought by William Assmann in the 1830s. William Assmann and his family are also buried within the Sandy Run Lutheran Cemetery. 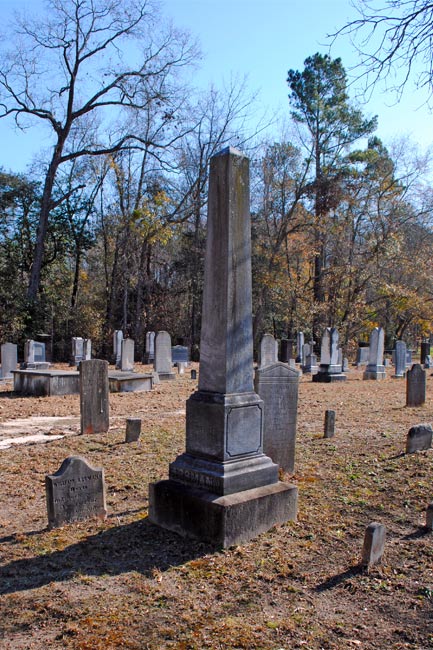 Below is the gravestone of the Reverend Christian Theus, also buried here. He was originally interred about seven miles away near the site of the Reformed Lutheran Church of the Congarees. The Reverend Christian Theus was a Swiss Reformed minister who served Reformed Lutheran churches in the Saxe-Gotha Township, an eighteenth-century Swiss settlement on the Congaree River just below the confluence of the Broad and Saluda rivers. Today the former Saxe-Gotha area comprises Lexington County. 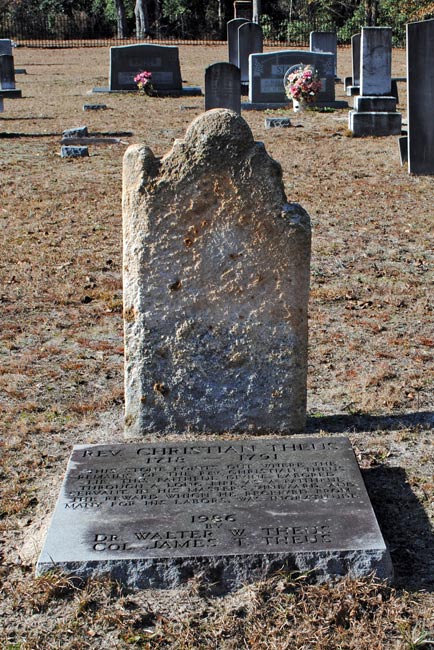 The Reverend Theus actively served Reformed and Lutheran churches in Saxe Gotha from 1739 to 1789, preaching to various congregations while also teaching school and farming his 300 acres of land. He is best known for unmasking a religious cult in Saxe-Gotha known as the Weberites, led by Jacob Weber. Because many “backcountry” ministers such as the Reverend Theus were itinerant and visited their flocks occasionally, most religious groups led their own services in between visits from the minister. Jacob Weber led a group of Lutherans in Saxe-Gotha to stray from Lutheran doctrine, convincing them that he was God and that other group leaders were the manifestation of Christ, the Holy Trinity, and the Virgin Mary. When the Reverend Theus discovered the cult and called it blasphemous, the Weberites voted to drown the minister. He was able to escape the cult when he found an African-American man sitting in a moored boat and had the man paddle him to safety. 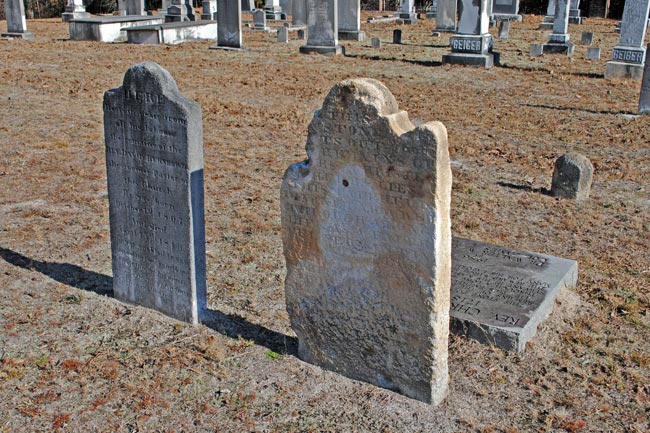 The cult engaged in sexual rituals and other blasphemous acts, which eventually led to murder. One member was thrown into a pit and killed when the group tossed mattresses onto him and then stomped on them, leading to his suffocation; another member was found chained to a tree, beaten and trampled to death in early 1761. Weber was convicted of murder for these acts and hanged in Charleston, though by then the cult had already spread to North Carolina, Virginia, and Maryland.

When the Reverend Theus died in 1789, he was buried in Saxe-Gotha. Abraham Geiger, a friend of the minister as well as a parishioner of Zion Church, served by the Reverend Theus, had a gravestone erected for him that said: “This stone points out to where the remains of the Reverend Christian Theus lie. This faithful divine labored through a long life as a faithful servant in his masters vineyard, and the reward which he received from the many for his labor was ingratitude.” The inscription can be seen on the grave stone on the right in the above photo.

In 1932 his grave and head stone were relocated here, and a commemorative marker was added in 1939 by the South Carolina Chapter of the Daughters of American Colonists. Though it is unclear why his grave was relocated, it was common during the development of road systems for rural graves to be moved; in fact, many Geigers were relocated to a nearby family cemetery, including Abraham Geiger, when a highway was built through the family’s original cemetery in Columbia.

In an 1858 edition of the Lutheran Observer, the Reverend J.B. Anthony, a former pastor of Sandy Run Lutheran Church, says of the Reverend Theus, “Among the octogenarians of this vicinity we have not been able to learn much more of Mr. Theus than a rude stone, standing in a vast cotton field, records. Few now living recollect to have seen him. No records of those early times have known to exist.”

Since then, the records of the Weber Heresy, as the cult murders came to be known, have established the Reverend Christian Theus as a defender of his faith.