Bethel United Methodist Church is the oldest Methodist congregation in Charleston. The church originally gathered in a simple frame structure called the Blue Meeting House on Cumberland Street in 1786, just one year after Bishop Francis Asbury visited the city and declared it in need of Methodism. Bishop Asbury was instrumental in organizing the church, which met with great contention from many Charlestonians due to its strict anti-slavery stance. As a result, the Blue Meeting House was frequently vandalized, and at times minsters were personally attacked. 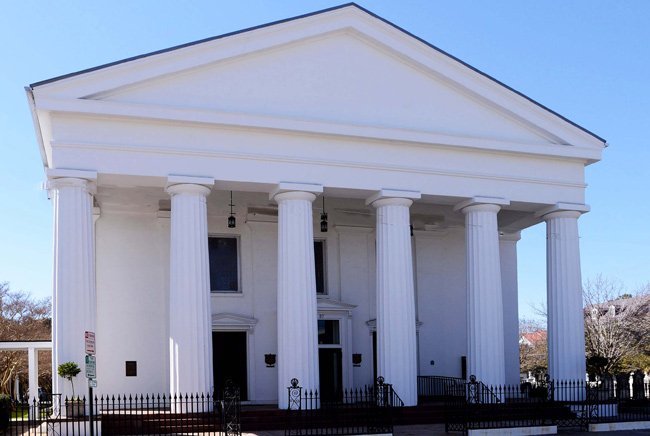 Despite suffering affronts and abuse, the church continued to grow. A larger sanctuary became necessary, as did land for the burial of members. The congregation purchased a lot on the corner of Pitt Street and Boundary (now Calhoun) Street from Governor Thomas Bennett, and a larger (though still simple) structure was built there in 1797. This church was called Bethel Methodist Church. 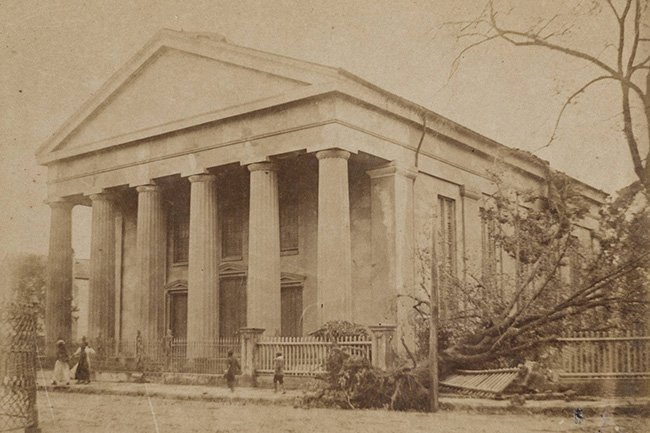 Though black and white Methodists attended church together at Bethel Methodist, black members sat in the galleries above. When the church found itself in need of an even larger building by the middle of of the nineteenth century, the first Bethel Church was moved to the corner of the lot to make room for the present structure. Built in 1852, the new church in the Greek Revival style was modern and more ornate. 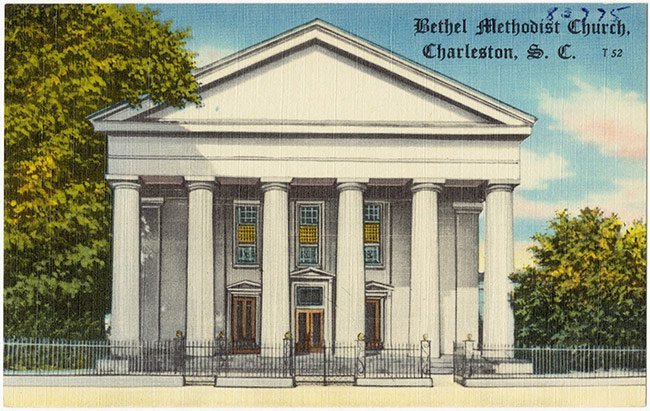 Bethel was the only church in Charleston that stayed open during the Civil War. The former sanctuary, called “Old Bethel,” remained in use by the black members, who had begun worshiping separately from the white members, until the Reconstruction era. In 1878 the building was donated to the black members of the congregation, who wanted their own church, and in 1880 it was moved to its current site on Calhoun Street.

Bethel Methodist Church is listed in the National Register:

Bethel Methodist Church (built 1853-1854), located on the site of Charleston’s first Methodist church building, is an exceptional example of antebellum Greek Revival ecclesiastical architecture. Except for the rather steeply pitched roof, the church is one of the better examples of Greek Doric temple architecture in the state. Of stuccoed brick painted white, the building has a massive, giant-order hexastyle Doric portico with a simple Doric pediment and entablature. Designed by a Mr. Curtis, Bethel Church has pilastered walls, and there is one tier of large windows on each side of the structure; the building has a gabled roof and a main entrance which is pedimented with consoles. The roof is more steeply pitched than is usual in a Doric temple to allow rainwater to drain more quickly, thus helping to eliminate the possibility of leaks. The portico withstood the 1886 earthquake intact and stands today unaltered. The auditorium-plan interior has a cove ceiling. The church has a cemetery with crepe myrtles on the north side.