This home in downtown Charleston was completed around 1806 in the Harleston neighborhood. Originally called the Village of Harleston, the area was first granted to John Coming and Henry Hughes between 1671 and 1672. John Coming and his wife, Affra, arrived to Charleston from England aboard the Carolina. Once in Charles Town, the couple established Comingtee Plantation on another land grant in present-day Berkeley County. 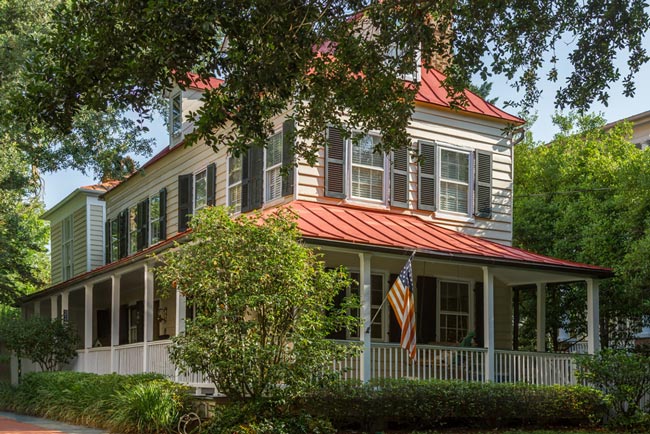 Coming’s portion of the land was left to the nephew of Affra Harleston Coming, John Harleston, in 1699. The Village of Harleston was developed in 1770, nearly a century after the Comings acquired the land that surrounds the neighborhood, and named after the Harleston family. The South Carolina Golf Club established America’s first golf club here in 1786, and the area then became known as Harleston Green.

The lot on which this home sits was purchased in 1801 by Daniel Bruckner, a merchant. His house was built around five years later, in time for the birth of his daughter, Julia Maria Bruckner. Just three years later Bruckner sold it to Christina Elizabeth Cobia, whose son, Daniel, had just built a neighboring home. This house stayed in the Cobia family until 1938 and remains one of Harleston’s most arresting properties.