On December 28, 1748 a small group of intellectuals crossing a broad spectrum of vocations formed a library society in Charleston. In doing so, the eclectic group created the third-oldest private library in the United States. The founders of the Charleston Library Society, consisting of merchants, planters, lawyers, a schoolmaster, a doctor, and a wigmaker, wished to “save their descendants from sinking into savagery.” The group’s collection originally consisted of not just books but also scientific equipment, including a telescope, a microscope, and a hydrostatic balance. 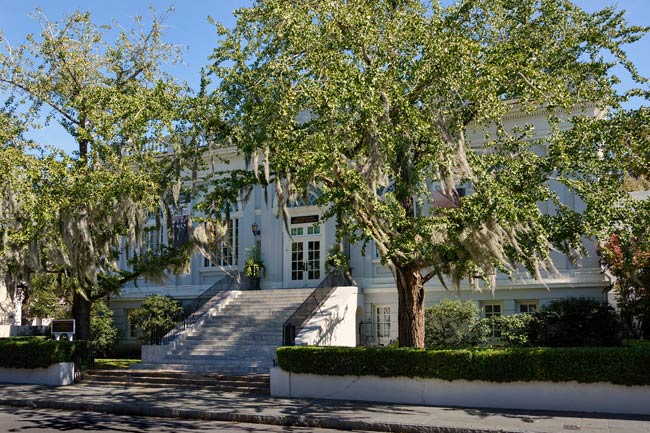 The society received a Royal charter in 1755 and went on to promote intellectual pursuits in the community by sponsoring an electrical experiment exhibit in 1767. Around this time the society also began bequeathing funds towards the establishment of a local college, which led to the forming of the College of Charleston. The society also became the foundation of the Charleston Museum, the oldest in the nation.

The society originally maintained its collection within the members’ private homes. The collection was later relocated to a Free School on Broad Street, where a member served as Headmaster, and then to the upper floor of member Gabriel Manigault’s liquor store until 1778. In 1792 the collection was moved to the third floor of the Charleston County Courthouse. It remained there until 1835 when the society purchased the former Bank of South Carolina building at 50 Broad Street and moved the collection there. During the Civil War part of the collection was relocated to the state house in Columbia for safekeeping; ironically, that portion was destroyed when General Sherman attacked the state house in 1865.

In 1914 the Charleston Library Society moved into its present King Street location. The Beaux Arts building was the first constructed specifically for the library society. Today the Charleston Library Society invites new members to join at varying levels of sponsorship. Membership not only allows access to the library’s expansive collection but also invites members to diverse programs hosted by the society, ranging from lectures and exhibits on history, literature, and music, among other topics.