This neon sign in downtown Charleston has been a fixture on King Street for decades, beckoning to customers of the former family-owned pharmacy. The two-story building was constructed in 1887 following the devastating earthquake of 1886. As was the case with many downtown buildings, businesses operated on the bottom floors while the second floor served as a residence. First used as a metalworks, this building later became Schwettmann’s Pharmacy in the 1920s. C.F. Schwettmann relocated to Charleston in 1871 after opening a pharmacy in Summerville – now Guerin’s – during the Civil War. His downtown Charleston business first occupied the Lining House on the corner of King and Broad Streets. That building had served as a pharmacy since the 18th century. 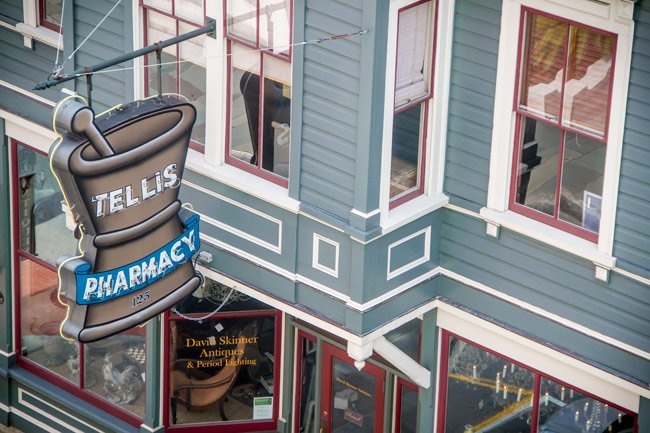 James Anthony Tellis bought this building in 1946 and opened a soda shop, called Ye Olde Fountain, here in 1949. In 1952 two of Tellis’s children, Vera and Tony, finished pharmacy school at the nearby Medical University of South Carolina (MUSC) and opened a drug store in their father’s building alongside the soda fountain. The soda fountain operated until the 1960s. Following the death of Tony Tellis in 1983, Vera and her sister, Alice Tellis Critikos, became partners in the business. Vera Tellis, who had been working as a pharmacist at MUSC, then came to the family business to serve as the pharmacist in 1988. They rented the upstairs as office space. 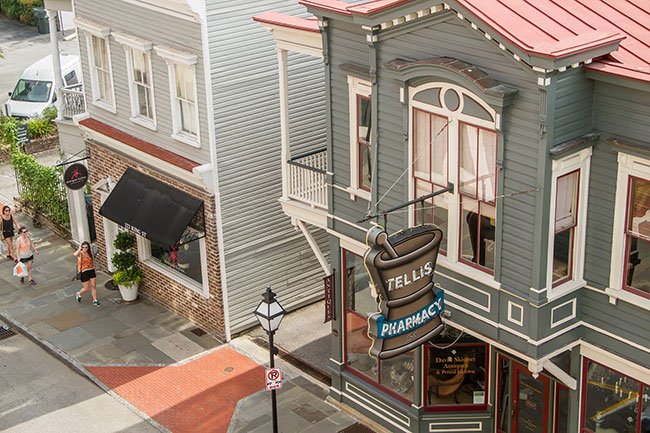 The Tellis family closed the pharmacy in 2011 but maintained a store in the building for another year. Vera and Alice finally closed the entire business in 2012; Vera Tellis was 80 years old. The family continues to own and lease the building, and today it is occupied by an antiques business. However, the familiar mortar and pestle sign still lights up the lower commercial end of King Street.