This three-story stuccoed house in historic Charleston was begun in 1796 by Mrs. Frances Motte Middleton, widow of John Middleton and daughter of noted Revolutionary War Patriot Rebecca Motte and her husband, Jacob. By 1797 construction of the Regency-style home was complete, the same year Mrs. Middleton married her second husband, Major General Thomas Pinckney. 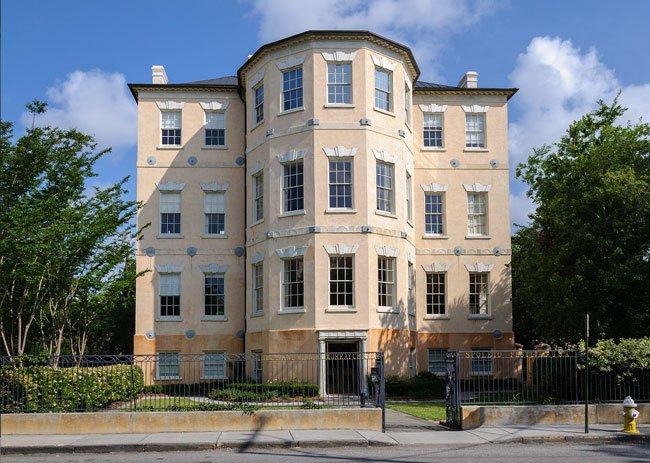 The Pinckneys lived here until they sold the home to Pinckney’s son in 1825. He died the following year, and the manse then changed hands several times before becoming the Water Works of Charleston – the future Charleston Commissioners of Public Works – in 1880. A reservoir was then built on the back of the property which was subsequently used as a public swimming pool until the 1960s. In 1988 the world-renowned arts festival, Spoleto Festival U.S.A., used the building as its headquarters before buying the property from the city in 2002. The home remains the headquarters for Spoleto Festival U.S.A., a seventeen-day international arts festival held in Charleston each spring.

The Middleton-Pinckney House is listed in the National Register as part of the Charleston Historic District:

(Charleston Old and Historic District) Charleston played an important role in Colonial, Revolutionary, antebellum and Civil War America. The city was a major Colonial seaport, an active participant in the Revolution, a seat of rice and cotton culture and a leader of secession. Today much of the nation’s great social and architectural history can be visibly appreciated because of the great concentration of period buildings that still line the city streets. The historic district contains primarily residential buildings in addition to commercial, ecclesiastical, and government-related buildings. Several historic neighborhoods are included because of their concentrations of historically and architecturally valuable buildings.

These neighborhoods possess the unique visual appeal of old Charleston, a picturesqueness created by the close proximity of buildings, in a wide variety of architectural styles. There is general harmony in terms of height, scale, proportion, materials, textures, colors, and characteristic forms, such as the side piazzas. All of the properties contribute to an expanded period of significance dating from 1700 to 1941. The great concentration of 18th and 19th century buildings give the district a flavor of an earlier America. The district contains many buildings of national historic and/or architectural significance. Built of brick, stucco, or clapboard, many of these properties are Charleston “single houses,” one room wide, with gable end to the street and tiered piazzas. Others are plantation style houses. Architectural styles include Georgian, Regency, Federal, Adamesque, Classical Revival, Greek Revival, Italianate, Gothic Revival, and Queen Anne, among others. The district also contains many outbuildings (stables, carriage houses, kitchen buildings), a majority of which have been altered extensively to accommodate modern needs.