Charleston is known as the Holy City for its history of inviting people of all faiths to worship here without fear of persecution. As a result, various churches were established as Europeans settled in Charleston; the city’s earliest church buildings belong to St. Michaels’s Church, the Unitarian Church in Charleston, and “Old Bethel” Methodist – three very distinct denominations! Even with this diversity, however, St. Stephen’s Episcopal Church, founded in 1822, stands out as the first church in Charleston, and possibly the first Episcopal church in the United States, to provide free pews to worshipers. At the time, pew fees were the norm, filling sanctuaries with only those would could afford to attend.

The church was organized by the Charleston Female Domestic Missionary Society – a benevolent organization – and the burgeoning congregation leased a room for their gatherings during its first two years. The church eschewed pew fees so that people of all economic levels could come together for worship. In 1824 the church built its first house of worship on nearby Guignard Street on land donated by Sarah Hopton Russell, wife of wealthy merchant Nathaniel Russell. Sarah was a founder of the Ladies’ Benevolent Society, from which the Charleston Female Domestic Missionary Society developed. Her daughter, also named Sarah, followed in her mother’s philanthropic endeavors in the church and the society. Another female parishioner, Sarah Rutledge – daughter of Edward Rutledge, signer of the Declaration of Independence and South Carolina governor – produced and sold a cookbook called The Carolina Housewife and donated the proceeds to the poor. These three women are commemorated on marble tablets within the church. 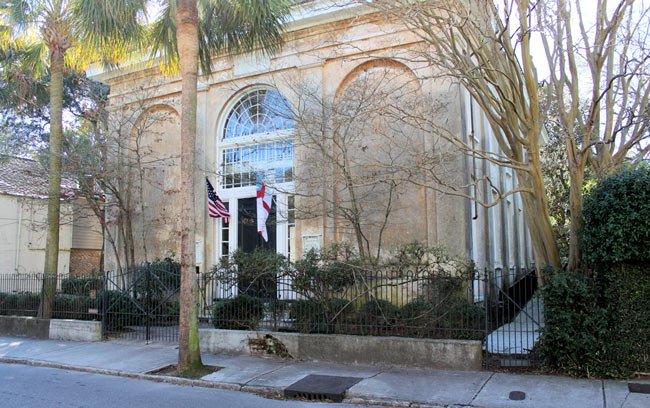 The church on Guignard Street burned in 1835, and the congregation replaced it with the present sanctuary the following year, designed by Henry Horlbeck. Beginning in 1923, an African-American Methodist congregation worshiped here for 65 years, and the church became racially integrated by 1987. Today the church welcomes a diverse group of members, continuing a tradition that began in the early nineteenth century when both freed blacks and slaves worshiped here alongside whites. Known for its community outreach and other missions, St. Stephen’s Episcopal Church remains a vibrant part of the Charleston landscape.