The history of New Wappetaw Presbyterian Church in McClellanville dates back to the late seventeenth century when a group of 52 (other accounts say 51) Congregationalists, or Dissenters of the Church of England, arrived from New England to nearby Wappetaw. The area was originally occupied by the Sewee Indians, but by the early eighteenth century, more European settlers began coming to this part of Carolina. Wappetaw, a Sewee word meaning “sweet water,” was the name of the land between present-day Mt. Pleasant and McClellanville. Today that land is known as Awendaw. In a July 25, 2002 South Carolina congressional record, then-senator Henry Brown stated, “Auendaugh-bough was the name of the settlement when the English colonists arrived, but it was later shortened to Awendaw.” 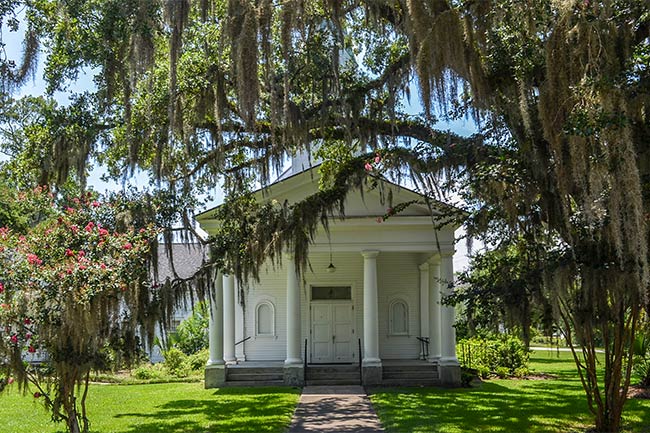 The New Englanders were not the first Dissenters to arrive to this region. While the settlers at Wappetaw arrived around 1696, another group from Massachusetts preceded them by a year or so and settled at Colonial Dorchester. Both groups arrived in search of religious freedom. 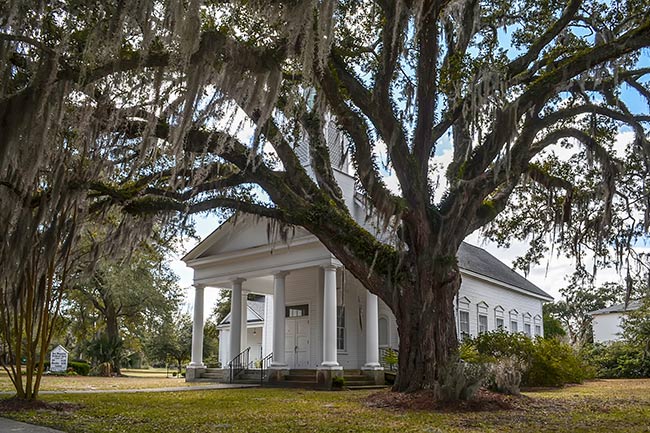 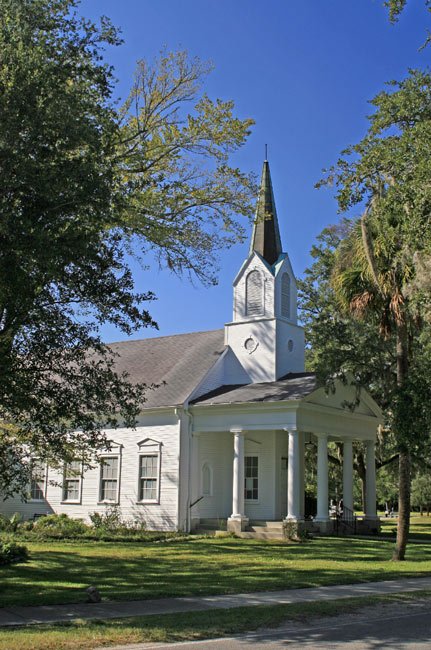 During the Revolutionary War both British and Patriot troops set up camps on the Wappetaw Church grounds. The group’s first church was burned by the British in 1782. It was rebuilt in 1786 and continued to serve the Wappetaw residents until the Civil War. Prior to the Civil War, neighboring planters such as those at Wappetaw were establishing summer homes in the village of McClellanville. Land holder Archibald McClellan had begun dividing and selling lots from his former Pointe Plantation, and the village of McClellanville, named for McClellan, soon developed. 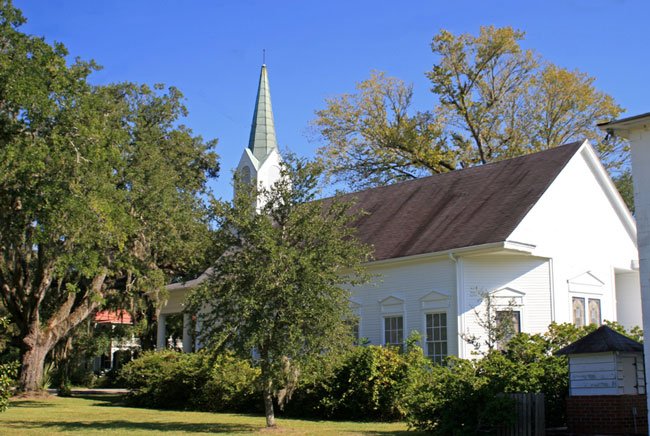 After the war, when local rice crops failed in the absence of slave labor, many nearby planters, including the Wappetaw Congregationalists, moved into town to re-establish their lives as merchants and fishermen. As a result, New Wappetaw Presbyterian Church was founded in 1872 in McClellanville, and the sanctuary itself was completed in 1875. It has undergone several additions and renovations since then, yet it retains its original integrity. The church was damaged during Hurricane Hugo in 1989; McClellanville suffered some of the state’s greatest damage during the storm. Fortunately, the church was completely rehabilitated by the following year. 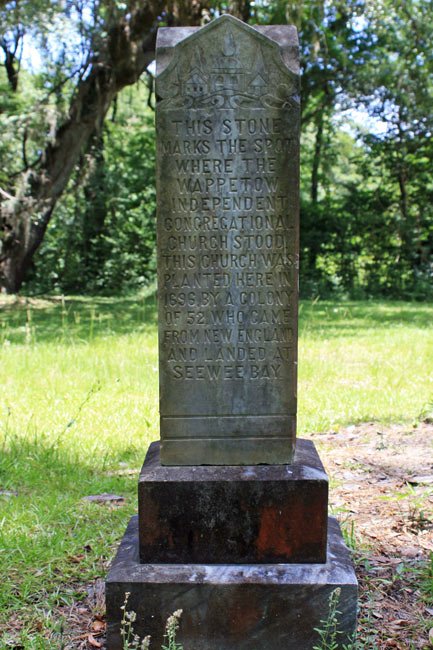 The former Wappetaw worship site, known as Old Wappetaw, remains in present-day Awendaw as a cemetery, though the church itself has been gone since 1898. A marker commemorating the original church and settlement, seen above, stands in its place. The Old Wappetaw cemetery can be seen below. In 1941 New Wappetaw Presbyterian built the now-dilapidated Halfway Creek Church in Shulerville so rural residents would have a local place of worship. 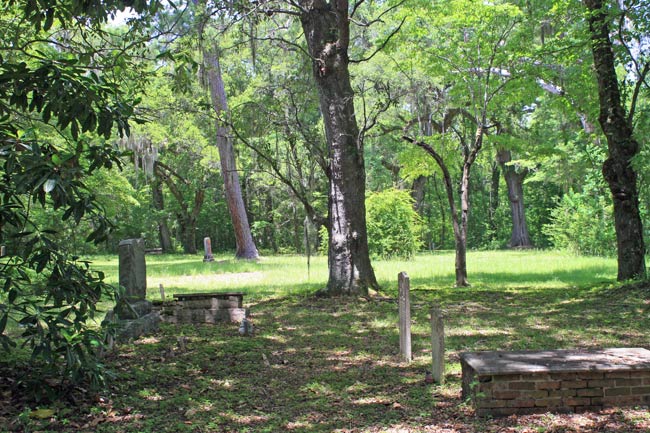 Below is an article that was contributed to the South Carolina Picture Project by Bill Segars of Hartsville.

As immigrants began coming to the Carolinas from Barbados under the auspices of the Lords Proprietor system in 1670, the 52 New Englanders who traveled down the coast from Massachusetts Bay Colony were not initially accepted. Why these people came to Wappetaw, a name given this area by the Sewee Indians meaning “sweet water,” from so far away is not real clear. They could have come due to the Salem Witch Trials of the time, or more likely, due to the rapid population growth in the Massachusetts Bay Colony area. Even though Carolina was a very strong Church of England colony and discouraged “dissenters” from coming here, Carolina had three Governors that professed to be dissenters from 1693 to 1700. So politically these governors may have encouraged this migration for their own support.

For whatever reason that they came, the “newcomers” tried very hard to be good citizens. They did not live in the growing town of Charles Town, and they wanted to do their part. So in 1706 when the French and Spanish attempted to invade Charles Town, the Wappetaw citizens took up arms to defend their neighbors, turning the invaders away. If the Wappetaw settlers were not accepted before this, they were immediately accepted as Carolina residents afterwards.

As small landowners, Wappetaw citizens struggled in this new land right along with the large plantation owners from the early 1700s through the Revolutionary War period. Growth in the Wando Neck area was strong from 1696 through 1717. Growth then reached a plateau until the 1730s, when a small upswing is seen. Then from the 1750s until the Revolutionary War, a tremendous land acquisition was seen by Dissenters settling in the Wappetaw area. Most of these settlers were “yeoman farmers,” or working-class families. They did own a few slaves, but typically worked their land themselves or along with their slaves. They proved to be a very vital part of the Carolina economy through exporting many crops and natural resources.

As the population of this area grew, so did the Congregational Church. A church was built here at Wappetaw by 1696 and one in the neighboring Cainhoy area shortly afterwards. The site of the Wappetaw Church was located on today’s Fifteen Mile Landing Road, just a few hundred yards behind the popular Sewee Restaurant. Gravestones of a number of early residents of Wappetaw can be seen here. The site is about 15 miles north of Mount Pleasant and about 20 miles south of McClellanville, in what was originally the Christ Church Parish.

In late 1775 when rumors of Revolution begin to circulate, the men of Wappetaw, like most Carolinians, began to choose sides – would they be loyalists or patriots? This question very often pitted neighbor against neighbor, as not everyone felt the need to get out from under England’s rule and embark on an uncertain future. This question generally went about half-and-half. Regardless of the answer, Wappetaw saw its share of military action in and around their church building. British troops took control of Charles Town in March of 1780, and they were also known to be encamped at Wappetaw Church on April 20, 1780.

There are two differing possibilities as to when the church was burned, and there is no doubt that it was burned. One possibility implies that Colonel Tarleton burned it in April of 1780. The more consistent account records that, towards the end of the British occupation of Charles Town, the Wappetaw Meeting House was being used as a British post under the command of Captain McNeil when the militia commanded by Colonel Hezekiah Maham attacked the encamped troops. As McNeil retreated to the safety of Charles Town, his troops set the church and all of its records on fire.

It is unknown when a church building was rebuilt, but in spite of post-war economic depression, this congregation would have been very eager to put the war behind themselves and get back to the business of their religion. There is record of the Independent Church in Christ Church Parish having a large wooden structure with a heavy double front door and two side doors leading to the galleries in 1786.

War again shaped the history of Wappetaw Congregational Church, this time the War between the States. Near the end of the war, in February of 1865, Federal troops were encamped near the church. As the troops evacuated the area heading northward, many slaves joined them. By the time they left, all of the pews and woodwork had been stripped for use as firewood during the cold winter month. It is unknown who stripped and burned the wood, but the bottom line is, worship at the old Wappetaw Church effectively ended, and the abandoned building finally collapsed in 1897.

As stability began to return after the war, so did population growth, and with population growth, the church also grew. Expansion with a chapel occurred in McClellanville, possibly the forerunner of both the 1872 New Wappetaw Presbyterian Church and the 1870 Mount Pleasant Presbyterian Church. This expansion gave church members who had recently moved away from the Wando Neck area a closer place to worship. For the Congregationalists, these two chapels were similar to Anglican and Episcopal chapels of ease.