This Charleston church with striking marbled columns was built in 1839 and is the third to serve its congregation. Founded in 1788 when the Right Reverend John Carroll sent the Reverend Matthew Ryan to Charleston from Ireland to start a parish, it was the first Roman Catholic church established in the Carolinas or Georgia. Under Father Ryan’s direction the congregation acquired a Methodist meeting house on this site for the burgeoning church in August of 1789. 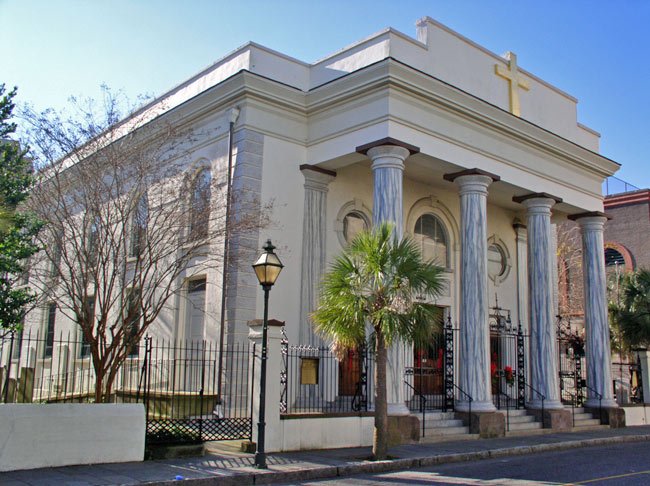 When the Reverend Ryan was transferred to Maryland at the end of 1789 after suffering an illness in Charleston, he was replaced by the Reverend Doctor Thomas Keating. The Reverend Keating continued the work begun by Father Ryan, permanently establishing the Catholic congregation and christening the parish St. Mary’s. However, he also became ill and relocated to Philadelphia, dying of yellow fever in 1793.

The meeting house that initially housed St. Mary’s was too dilapidated for the growing congregation to continue using, and plans were made to replace it with a new building. Construction on a brick sanctuary began in 1801, and the first service was held in the new church in 1806. Sadly, the brick church did not serve St. Mary’s for long; it was a casualty of the the Great Fire of April 28, 1838. Yet, the congregation was unbowed by the disaster and laid the cornerstone for the present building that August. The present Classical Revival church received its first worshipers on June 9, 1839. Though it suffered damage during the Civil War and the earthquake of 1886, the church survived both events as well as Hurricane Hugo in 1989 and stands as one of the Holy City’s most notable structures.

Church records show that the first trustees of the church were Irish immigrants, as were its early members. Also comprising St. Mary’s in its formation years were French refugees from the West Indies fleeing the 1793 slave insurrection in Santo Domingo. Two daughters of the Marquis de Grasse, who led the voyage from Santo Domingo to Charleston, are interred in the graveyard of St. Mary’s. In 1820 Pope Pius VII established the Diocese of Charleston, naming Father John England as its first Bishop. Notable interior features of St. Mary’s include a painting of the Crucifixion by Charleston artist John S. Cogdell, masterpiece replicas by Caesare Porta of Rome, Italy, and a Jardine organ built in 1874.

The church has undergone several restoration projects. Most recently, a project revealed faux charcoal marbling beneath the white finish of the exterior columns. The columns were restored in a similar pattern to reflect the historic detail. Today, the columns are a hallmark of Hasell Street.

St. Mary’s Church is considered the first established Roman Catholic Church in the Carolinas and Georgia. In 1789 trustees for the church purchased the property which it still occupies. In 1791 it was incorporated by the General Assembly of South Carolina as the Roman Catholic Church of Charleston. According to church records, the structure being used for services was soon replaced by a brick structure. This building was destroyed in 1838 in the Charleston fire of that year. Construction of the third and present structure began almost immediately, and the church was opened for worship June 9, 1839. The rectangular structure features four Doric columns that support a massive entablature which is capped with a stepped parapet. The parapet wall was probably added during the renovation program of 1895. A large central portal is flanked by a smaller door on each side. A semicircular arched window is located directly above the central door, with smaller circular windows above the side doors. Both circular and semicircular windows are embellished with keystones. The church graveyard surrounds the church on each side and to the rear.