This McCellanville home, which overlooks Jeremy Creek, was built in 1899 (1) for Bonneau Ursula Morrison McGillivray (1877-1945), daughter of Richard Tillia Morrison, II and his wife, Eliza Abigail Toomer. Morrison was one of McClellanville’s founding fathers. He and town namesake Archibald McClellan subdivided their plantations – Jeremy Plantation and Pointe Plantation, respectively – and sold the lots to wealthy planters for summer homes. After the Civil War, many former planters permanently moved into burgeoning villages such as McClellanville to restart their lives as merchants. 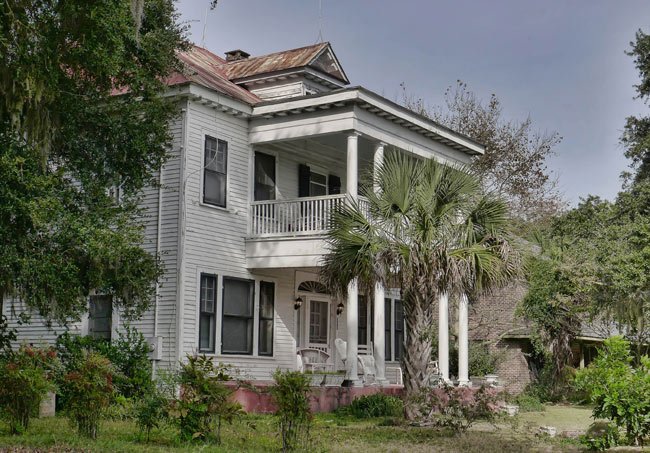 Bonneau (2) – or “Nonie” as she was called – lived here with her husband, Dr. Hugh Swinton McGillivray (1871-1960), whom she married in 1899. Born in Charleston to Elizabeth Gready Ward and Alexander Chanler McGillivray. Dr. McGillivray was a descendant of Alexander McGillivray, a Scottish ship captain who helmed slavers (ships that transported enslaved people abducted from Africa) during the mid-1700s (3). A family history written by Dr. McGillivray holds that Alexander’s brother, Lachlan McGillivray, left Charleston and settled in the Savannah area. Lachlan, he writes, married an Indian princess and their son, also named Alexander McGillivray, became the famous chief of the Creek Nation who led the tribe into battle and negotiated treaties with Washington. This is a matter of debate, however, and some say there is no reliable evidence that Alexander and “Lachlan Lia,” as he was known, were brothers (3).

In 1893 Dr. McGillivray graduated from the College of Charleston. He received his doctorate from the University of Goettingen in Germany under Lorenz Morsbach and authored The Influence of Christianity on the Vocabulary of Old English. A respected scholar, Dr. McGillivray taught at Converse College and The Old Citadel. He also served as chairman of the English department at Charleston High School (4). After retiring he taught at the Confederate Home and College in Charleston. A published poet, he was elected president of the Poetry Society of Charleston. After Nonie McGillivray’s death in 1945, Dr. McGillivray married Margaret Gibbs Taylor.

As a side note, Nonie’s nephew, William McGillivray Morrison (5), served from 1947 through 1959 as the 57th mayor of Charleston. Her brother, Henry Toomer Morrison, was Mayor Morrison’s father.

The Bonneau Ursula Morrison McGillivray House has undergone at least two restorations, one in 1950 and another in 2007, and remains a private residence. It is listed in the National Register as part of the McClellanville Historic District:

The McClellanville Historic District contains a collection of approximately 105 residential, commercial, religious and educational properties dating from ca. 1860 to ca. 1935. This collection is architecturally significant as an illustration of the founding of a pineland resort village and its development into a small but stable year-round commercial fishing village. McClellanville began in the late 1850s as a summer retreat for St. James Santee and Georgetown planters.

The prevailing vernacular forms, especially the central hall farmhouse, predominated in early McClellanville architecture, although the more fashionable architectural styles began to receive attention and can be seen throughout the town: Carpenter Gothic, Queen Anne, and Italianate with a rare Colonial Revival example. The commercial strip developed in the early 20th century and [is] of frame construction built directly on the road. The historic district is visually unified by the nearly ubiquitous wooden frame construction, by the consistent scale of the house, lots, and their relation to the banks of the creek, by the tremendous live oak trees that permeate the town, and by the relative absence of contemporary commercial intrusions.

1. The National Register gives the construction date of the Bonneau Ursula Morrison McGillvray House as 1899 in one place and 1920 in another. Other sources, such as McClellanville and the St. James, Santee Parish say 1920. Nonie was born in 1877 and married in 1899 at age 22. The 1899 date would make sense if the home were built as part of a dowry.

2. Please note that Nonie’s given name was Bonneau Ursula as noted on her gravestone. Many sources incorrectly call her Ursula Bonneau.

6. Bud Hill, founder of the Village Museum in McClellanville, provided much of the information on this page.