The Dizzy Gillespie Home Site Park in Cheraw was dedicated to the “King of Jazz” and Cheraw native in 2002. John Birks Gillespie, born near this park in 1917, was known for introducing himself in shows as “Dizzy Gillespie from Cheraw, South Carolina.” The town, being as proud of him as he was of it, contracted South Carolina metal artist Bob Doster to create the art within and surrounding the park in his honor. The notes in the park’s fence are those to Salt Peanuts, one of Gillespie’s famous songs. 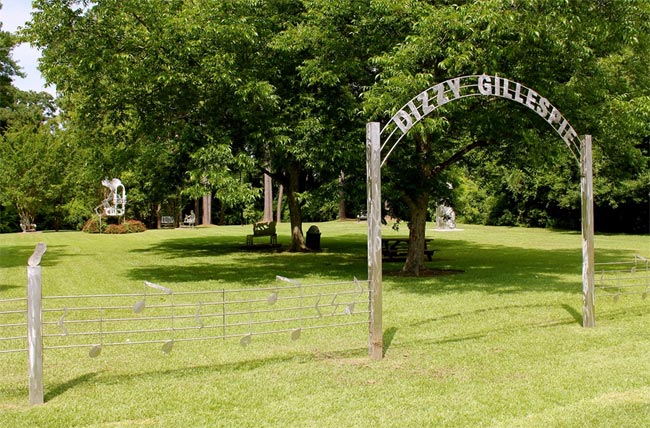 The park was established near the sites that were significant in shaping the trumpeter’s life, including Wesley Methodist Episcopal Church and the Robert Smalls School. The town also erected a statue of Gillespie on its Town Green and holds a jazz festival each year during the third weekend of October, near the time of Gillespie’s birthday, October 21st.

SCIWAY thanks David Sides, Cheraw Director of Tourism and Community Development, for sharing the above photo and much of the information.