Located near the Dizzy Gillespie Home Site Park, this church in Cheraw was the childhood place of worship for the legendary jazz musician. Originally called Wesley Methodist Episcopal Church, it was rebuilt in 1915. Gillespie’s father, a brick mason, is thought to have helped with its construction. 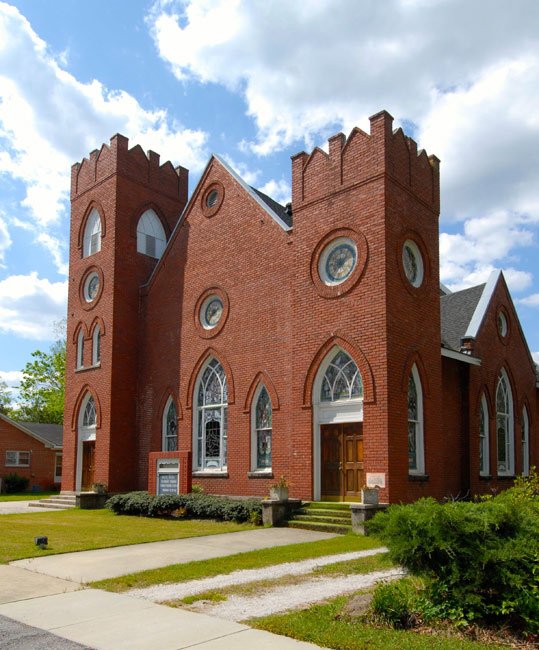 According to Cheraw Director of Tourism and Community Development David Sides, Dizzy Gillespie would wait at the back church entrance to help an elderly parishioner up the stairs and to her seat. He lived only one block away from the church, and as an adult, he often credited his experiences there as having shaped him.

David Sides, who shared the photo above, offers this insight into the church’s history: “Shown is Wesley United Methodist Church, the childhood church of famed jazz artist Dizzy Gillespie. Known then as Wesley Methodist Episcopal Church, the church was rebuilt in 1915. Dizzy’s father was a band leader as well as a brick mason, and it is thought that he used his brick laying skills in the church’s construction. It’s obvious the young Dizzy practiced what was preached here. Each Sunday morning, from the time he was four years old until he left Cheraw at age 16 in 1933, Dizzy would wait for the arrival of one of the church’s elderly parishioners and assist her in walking up the steps to the church. Dizzy said he would cut through one backyard and arrive at the church doors, since the family home was only one block away. The church is located at 307 Greene Street and is part of Cheraw’s 10-block historic district.”