This simple depot erected in the Chesterfield County town of Patrick in 1900 is actually a prefabricated structure, like many turn-of-the-century small-town depots. The depot was built by the Seaboard Air Line Railway company as a stop along the Columbia-and-Cheraw line, as was the town of Patrick itself. 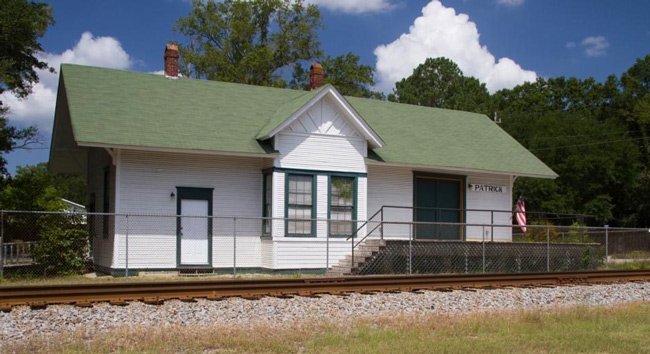 When the tracks of South Carolina’s first railroad – the Charleston-to-Hamburg line – were laid in 1830, the railroad bypassed much of the Midlands and the upper part of the state. The railroad was established to compete with the shipping industry along the Savannah River, and the cash crop of cotton was abundant along this route and made the rail profitable. Eventually lines branched out to other places in the state for both passengers and freight, but the hills and sandy regions of the state were avoided by railroads because the terrain was too uneven for laying lines and the soil too barren for agriculture other than cattle and subsistence crops. 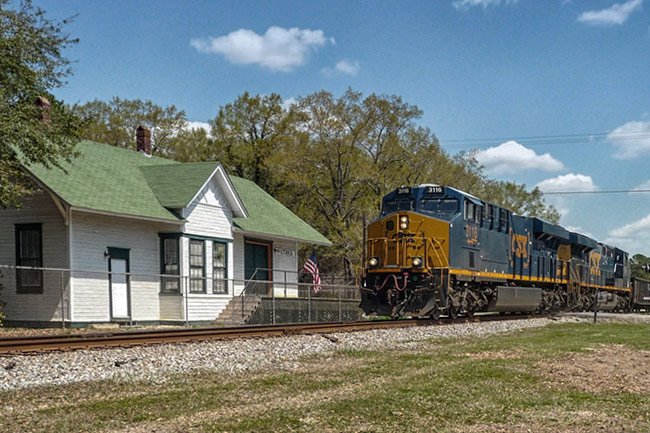 Travis Mackey of Columbia, 2014 © Do Not Use Without Written Consent

Following the Civil War, railroad development in South Carolina was halted as lines were rebuilt after suffering extensive damage. However, at the end of the nineteenth century, advances in the railroad industry allowed for tracks to accommodate hills more easily. The lumber industry also began to boom at this time. The sandy terrain of the upper Midlands was ideal for growing pine and scrub oak, both valuable timber species. Soon sawmills and lumber factories were erected throughout the sandy regions of the state, and in 1899 a 91-mile rail line was planned to connect the cities of Columbia and Cheraw to transport lumber freight as well as passenger travel. 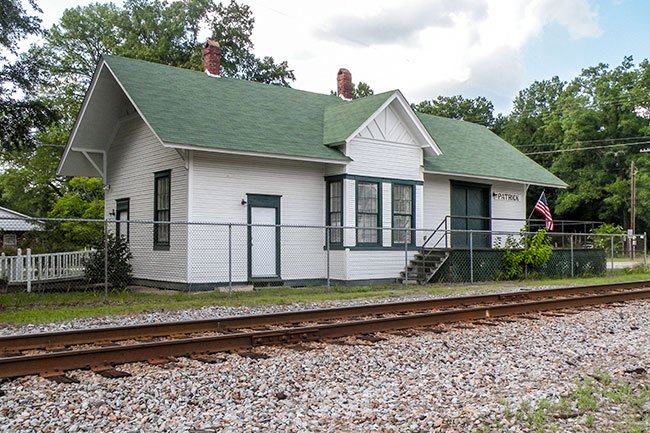 Flagship towns such as Patrick – named for Seaboard executive John Tyrant Patrick – and nearby McBee were established as stops along the rail line, transforming a previously rural landscape into small, modern commercial hubs. Depots such as this one were made from models and materials shipped into towns on the rails and thrown together within a day or two. The railroad that runs through Patrick remains in use by CSX Railroad, though the depot received its last passengers in 1971. The town now rents the depot from CSX as a community center. 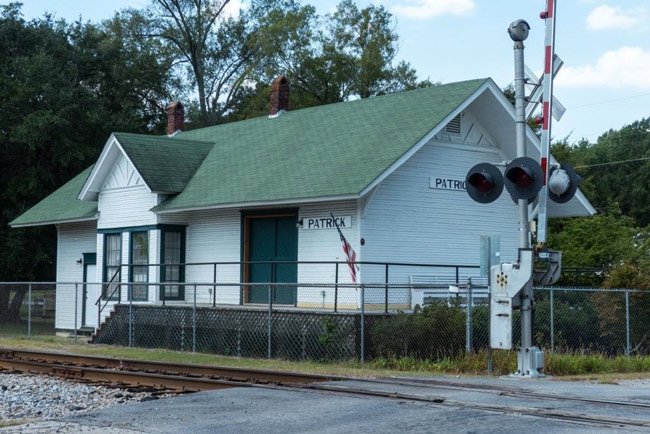 The Patrick Depot is listed in the National Register:

The Seaboard Air Line Railway depot, built sometime in the last half of 1900 or the early months of 1901, was the cornerstone of Patrick, one of several flagstop towns that developed along the Seaboard Railroad line between Columbia and Cheraw. The development of the town exemplified the process by which railroads penetrated the Sandhills region of the southern United States in the last decades of the nineteenth century, reshaping a landscape that had long be predominantly rural, sparsely populated, and generally isolated. In addition, the depot is an excellent example of a small-town railroad station, a specific building type that became commonplace across the nation as the railroad industry reached its peak in the decades between 1880 and 1930. The building is a one-and-one-half story frame building with a simple rectangular plan. It is covered by a moderately pitched roof clad in pale green asphalt shingles and two small, red brick chimneys rise from its peak. Facing the tracks on the northeast and southeast are signs that proudly announce “Patrick.” Today the depot remains as much the center of the town as it was in the early twentieth century.