Pee Dee Union Baptist Church in Cheraw formed in 1867 when nearly 300 African-Americans who had attended Cheraw Baptist Church prior to the Civil War organized their own church. 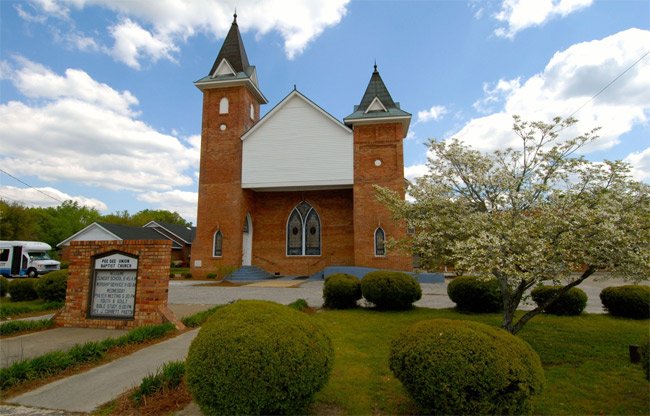 David Sides of Cheraw, 2012 © Do Not Use Without Written Consent

The church’s first pastor, Reverend Wisdom London, initially preached from a platform on this site. Shortly afterwards, a frame building was constructed. However, a devastating tornado demolished it in 1912, and this brick church was built in its place later that same year.

Many thanks to David Sides, Cheraw Director of Tourism and Community Development, for providing the above photo and much of the information. Here, David expands on the history of Pee Dee Union Baptist Church:

“Pee Dee Union Baptist Church was founded in 1867 by African-American members of Cheraw First Baptist Church, following their request for letters of dismissal to form this new congregation. Anxious for some good preaching, the church’s first pastor, Reverend Wisdom London, conducted the first services on an outdoor platform prior to the church’s completion.

“The original wooden church, built on a bluff overlooking the Great Pee Dee River, was destroyed by the big blow in the early 1900s. The current sanctuary was rebuilt in 1912. Less than a block from this historic church, you will find Levi Byrd Park, named for Cheraw native instrumental in establishing the South Carolina NAACP.”