At least four jails have served Colleton County over the past 330 years. Its first known jail was located in the original county seat at Jacksonboro – alternatively spelled Jacksonborough – which also functioned briefly as South Carolina’s state capital during the Revolutionary War. Shortly after Walterboro succeeded Jacksonboro as the county seat in 1817, a second jail was built behind the present-day Colleton County Courthouse. 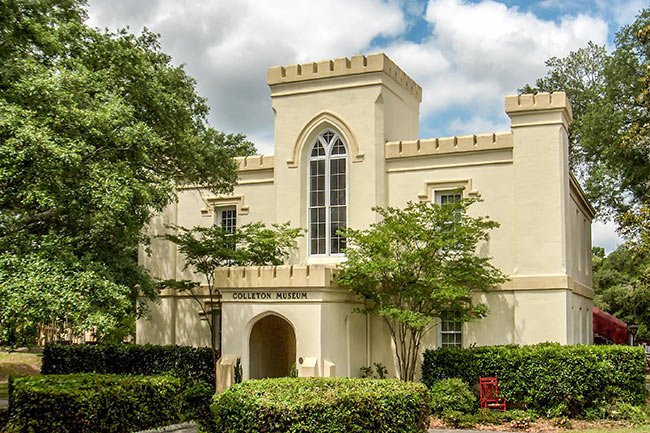 Edward Heintz of Erie, PA, 2010 © Do Not Use Without Written Consent

Structurally unsound, the second jail was replaced four decades later by the jail shown here. Designed in 1855 by noted Charleston architects Edward C. Jones and Francis D. Lee, this imposing fortress served as Colleton County’s third jail. It was remodeled in 1937 and continued to house inmates until at least 1959 (1). Since then, it has served several county administrative divisions, including the probate court. The Colleton Museum occupied the second floor until recently. 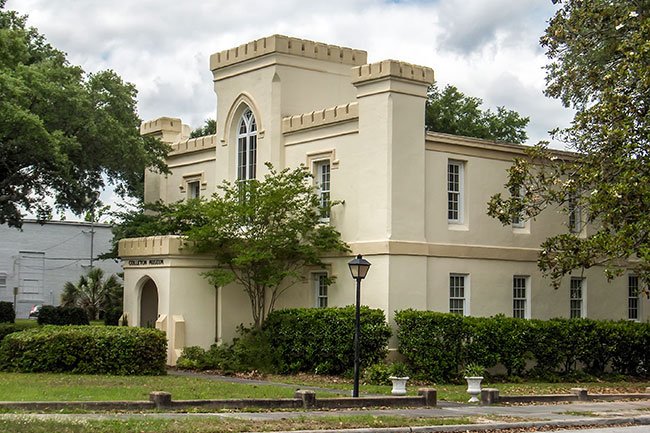 Edward Heintz of Erie, PA, 2010 © Do Not Use Without Written Consent

As early as 1682, Colleton County was functioning as one of the three counties in Carolina, but the first historical evidence of a jail is not recorded until mention is made of the jail at Jacksonboro in 1799. The removal of the county seat from Jacksonboro to Walterboro not only warranted a new courthouse but a new jail was also constructed behind the present courthouse. The soundness of the construction of that old jail came into question in the 1850s when the Grand Jury of Colleton County recommended that a new jail be built. Due to the inferior construction of that second jail, criminals had to be sent to Charleston to await their trials. After the South Carolina legislature adopted plans submitted by Jones and Lee, architects from Charleston, the present neo-Gothic structure was built for a cost of $11,000 in 1855-56 by Jonathan and Benjamin Lucas. This jail with a crenulated parapet resembled a small fortified castle and served the community until 1937 when a fourth jail was constructed. The building was then remodeled to house the office of Social Services. In 1975 the ‘old Jail’ became vacant again and the Colleton County Council established an Old Jail commission to find a suitable use and oversee the reconstruction (2).

The Old Colleton County Jail is listed in the National Register:

The Old Colleton County Jail is a stuccoed brick building built in 1855-56 by J. and B. Lucas of Charleston in the Gothic Revival style. The building is significant architecturally as a fine example of Gothic design in a cultural area where Gothic architecture is a rarity. Its architects, Edward C. Jones and Francis D. Lee, were well known in Charleston and throughout the state. They were in high demand at this time, with designs including courthouses, churches, college buildings, businesses and private residences all over South Carolina. The jail in part resembles a miniature, fortified castle. The front facade has crenellated parapets, turret-like structures at either corner, and a massive central tower above the main entrance. The main entrance is shielded by an extended, enclosed porch with buttresses and a central pointed archway entrance at the front and narrow slit windows on the sides. A large lancet window with hood mold is set in the massive central tower above the main entrance. Hood molds also accent the remaining windows on the front façade.