The Pee Dee region is not known for it mountainous vegetation, yet a bluff between 60 and 80 feet high in Hartsville, created by the ancient fall line of the sea when it lapped the shoreline that once existed here millennia ago, is home to an abundance of mountain laurel. The mountainous plant, Kalmia latifolia, gives the bluff and its surrounding property the name of Kalmia Gardens. 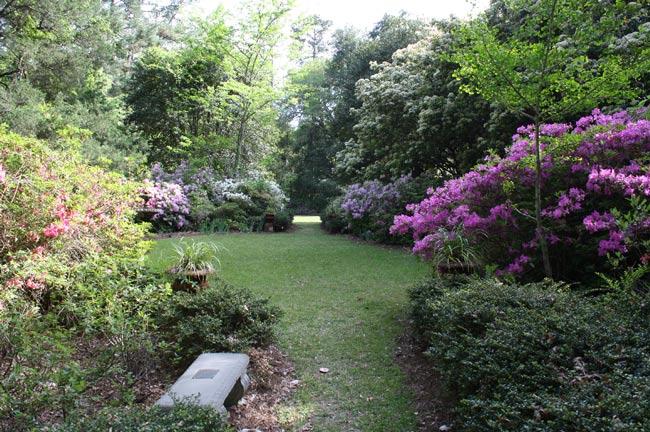 Two hundred acres of land along the Black Creek, which included the towering bluff, was granted to Benjamin Davis in 1772 by King George III. The property was subdivided and sold off in parcels, and in 1817 Thomas Edwards Hart of Society Hill bought 900 acres here, which included the original Davis property. He and his wife, Hannah, built their home in 1820 – known today as the Hart House – and established Kalmia Plantation on the fertile soil of the Pee Dee, primarily growing cotton and tobacco. 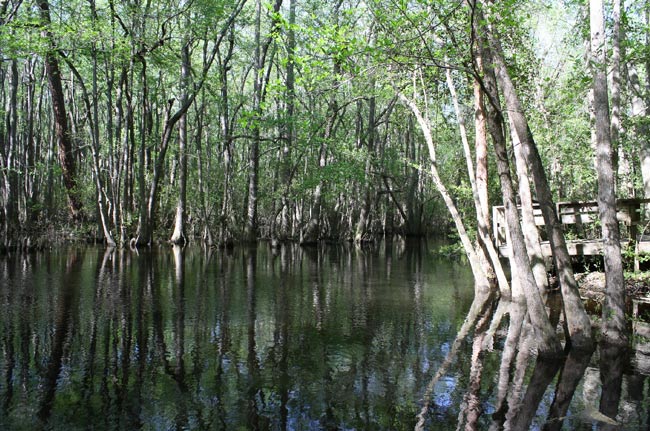 The Harts acquired more land over the years, bringing the plantation to 1,223 acres. Thomas Hart became the community’s Post Master, and by 1837 the town was called Hartsville. Thomas Hart died in 1842, and the property remained with Hannah until she sold it in 1859 to her son-in-law, Thomas Law. It eventually was subdivided and changed hands over the decades, and over time the Hart House and its surrounding property fell into disrepair. 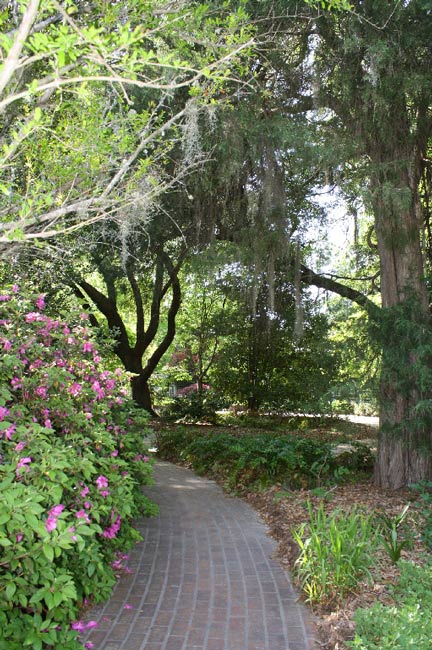 In the early decades of the twentieth century, Dr. William Chambers Coker, son of local luminary Major James Lide Coker, was fascinated with the vegetation that grew at the former plantation. Dr. Coker was chairman of the botany department at the University of North Carolina at Chapel Hill and had studied the plant community in Hartsville, even publishing a book on the town’s flora called The Plant Life. In 1932 he purchased this property – then 44 acres – and gave it to his sister-in-law, Mrs. May Roper Coker, an enthusiastic horticulturalist. “Miss May,” as she was known locally, renovated the Hart House and created the spectacular gardens that grace the bluff today, opening them to the public in 1935. 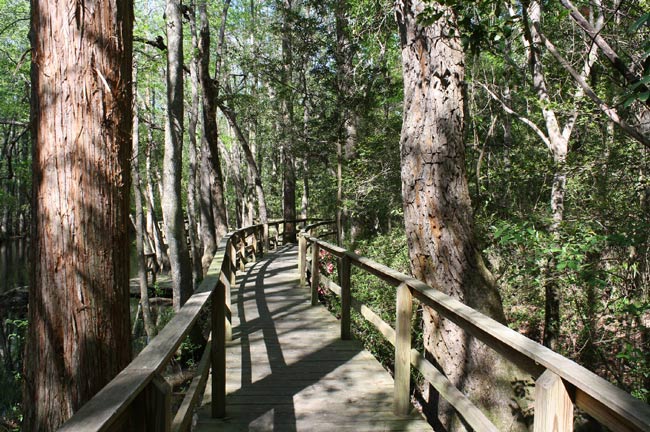 The wrought-iron gates that greet visitors honor Miss May. The entrance gate bears her initials and was dedicated by her family in 1992. Other gates created in 1935 by Mrs. Frank Tyldesley of Wales depict camellias, Miss May’s favorite flower. It is fitting that the property’s namesake flower, Kalmia latifolia, blooms in the month of May. 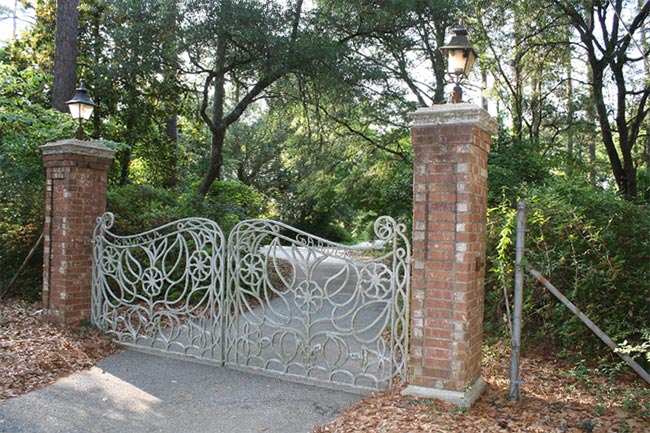 Miss May had a generous spirit, and in 1965 she donated the house and 28 acres of the grounds to nearby Coker College (now Coker University). Today the gardens serve as an outdoor classroom for the liberal arts school and remain open to the a public for all interested in studying the native and introduced plants that Miss May personally cultivated on this unusual bluff in the Pee Dee. 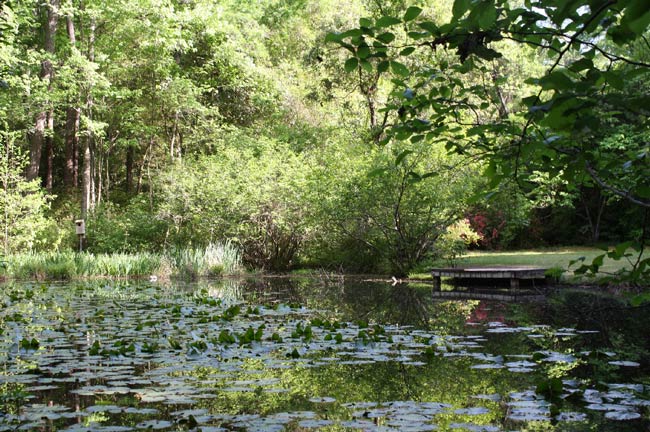 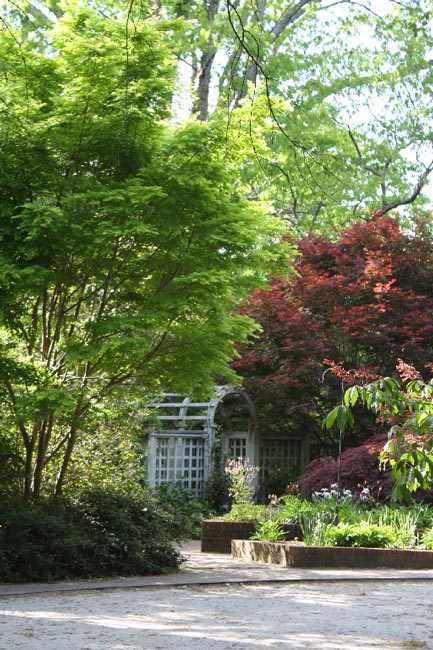 Kalmia Gardens is listed in the National Register:

The Thomas E. Hart House is significant as an excellent local example of an early nineteenth century I-House and for its association with Thomas Edwards Hart (1796-1842), the prominent Darlington County planter for whom Hartsville was named. The house is a central feature of Kalmia Gardens (ca. 1932), which is significant as a designed botanical garden of the early twentieth century and is the only known such garden in South Carolina.

The house was built ca. 1817 by Hart, soon after he moved to this site on Black Creek and acquired a tract of some nine hundred acres. The house is of heavy timber frame construction with weatherboard siding. It is two-stories with a rectangular plan, lateral gable roof, and exterior end chimneys. A one-story, hip roof porch extends across the full façade and wraps to the right elevation. A one-story addition was made to the rear ca. 1932. The property immediately surrounding the Hart House includes a ca. 1932 frame, hip roof contributing building. Kalmia Gardens consists of 28 acres of natural and planted flora, and designed features such as a pond and paths. The garden is located on an eighty-foot bluff on Black Creek. This unique topography creates the setting for the indigenous growth of mountain laurel (kalmia latifolia), which is the main theme of the garden.