This marker in Society Hill denotes the site where African-American community leader Lawrence Faulkner lived and operated a store. Faulkner was born in 1840 and moved to Society Hill in 1871, where he was a successful school teacher and merchant. He also served the community as Postmaster from 1877 through 1899. 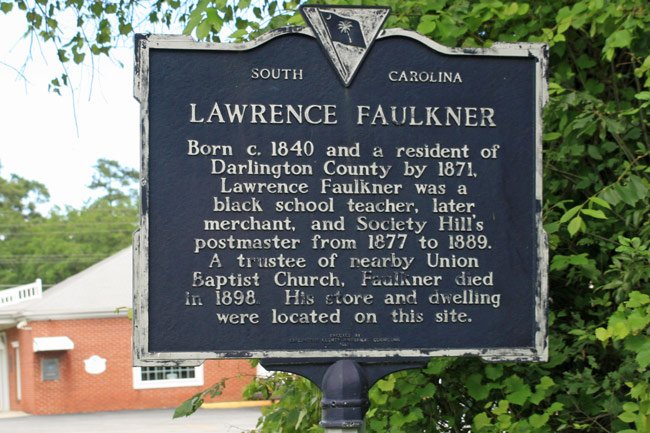 Faulkner was the first Superintendent of nearby Union Baptist Church, founded in 1886. His son, the Reverend Dr. William J. Faulkner, was the Dean of the Chapel at Fisk University in Nashville, Tennessee, as well as the first African-American president of the National Association of College and University Chaplains. Dr. Faulkner also served as the president of the Nashville NAACP and was the first pastor of Manor Park Congregational Church in Chicago. He was a Civil Rights activist and worked in the ministry with Martin Luther King, Jr.’s grandfather, A.D. Williams, at Ebenezer Baptist Church in Atlanta.

After Lawrence Faulkner died in 1898, his widow hired a former slave named Simon Brown to assist with maintaining their property. Brown resided next to the Faulkners. As a slave, Brown was kept illiterate but had refined his gift of storytelling and regaled the Faulkners with tales of “Brer Rabbit.” Dr. William Faulkner recorded these stories and compiled them into a volume of folktales entitled The Days When the Animals Talked.