Trinity Episcopal Church in Society Hill was organized in 1833, and this building was constructed the following year. Not only was Trinity the first Episcopal church in an area founded by Welsh Baptists, but it is the oldest church building of any denomination remaining in Darlington County. 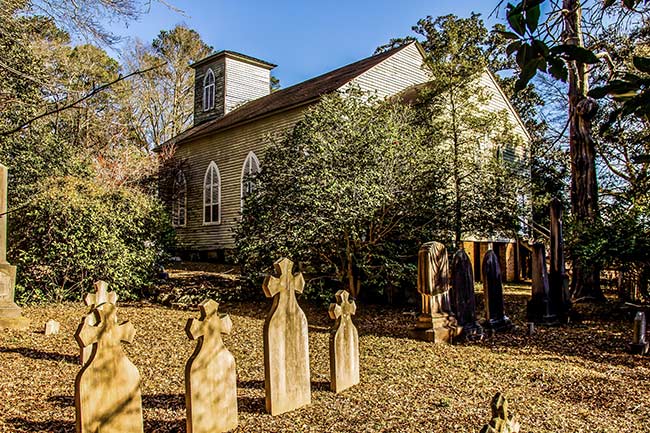 Ron Stafford of Cheraw, 2019 © Do Not Use Without Written Consent

Trinity continued to be the only Episcopal church in the Baptist-dominated area until 1859 when another Episcopal church formed near Mars Bluff. There were not enough Episcopalians in the area to support both churches, and Trinity ceased weekly services in 1929, becoming officially inactive in 1931. Though the church no longer holds weekly services, it opens its doors each April for an annual service. 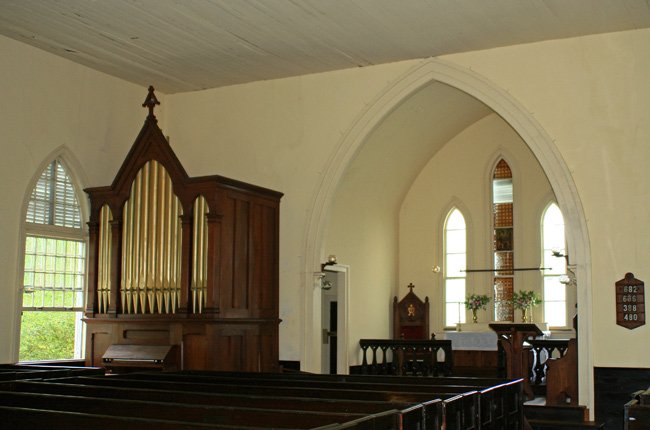 The church is now privately maintained. The clapboard sanctuary boasts a rare and fully-restored tracker organ crafted by William B. D. Simmons of Boston. Installed on October 18, 1873, the organ, which must be manually pumped, cost $1,250. 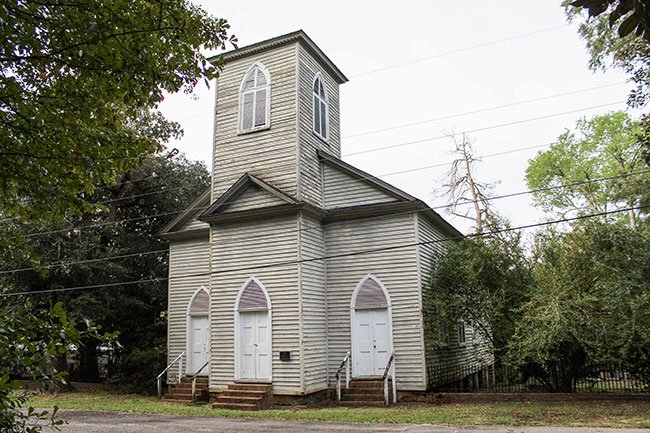 Trinity Episcopal Church is listed in the National Register as part of the Welsh Neck-Long Bluff-Society Hill District:

The Welsh Neck-Long Bluff-Society Hill area is one rich in historic significance. The Welsh Neck community was an early religious center (a ca. 1738 Baptist church was established here) for the Pee Dee region, and Long Bluff served as a judicial center. The courthouse at Long Bluff, with its jail, tavern, and supporting buildings, was a center of activity for the Upper Pee Dee region during the Revolution. Few small communities have contributed more to the public in the way of culture, education and leadership than has Society Hill. It has numbered among its population outstanding leaders in religion and education, jurists, statesmen, soldiers, authors, and agriculturists.

The Society Hill Library Society was formed in 1822. This group grew out of the St. David’s Society, founded 1777 in Cheraw, which had a wide-spread influence and was a main factor in making Society Hill a center of intelligent leadership in the Pee Dee for a century and a half. This is a rural community with many fine antebellum homes in the Georgian mode. Constructed on large lots or in wooden settings, many are two-storied clapboard structures with one-story front verandas. Nineteenth century mercantile establishments still operate in unadorned frame buildings of a purely functional design. Within the entire district there are approximately 250 structures. Welsh Neck and Long Bluff, both now unoccupied wooded areas, are considered excellent potential archaeological sites.

Below is an article that was contributed to the South Carolina Picture Project by Bill Segars of Hartsville. It originally appeared in his local paper, The Darlington New & Press. It was published in April of 2015.

In the sleepy little town of Society Hill sits a seldom-seen jewel of religious history for Darlington County and South Carolina. Hundreds, possibly thousands, of people drive within 150 yards of it daily and do not realize what they are missing. At 159 Burns Street, just off United States Highway 15 in Society Hill, Trinity Episcopal Church sits empty, eagerly awaiting each year’s annual service when it comes back to life with song, prayer, and fellowship. 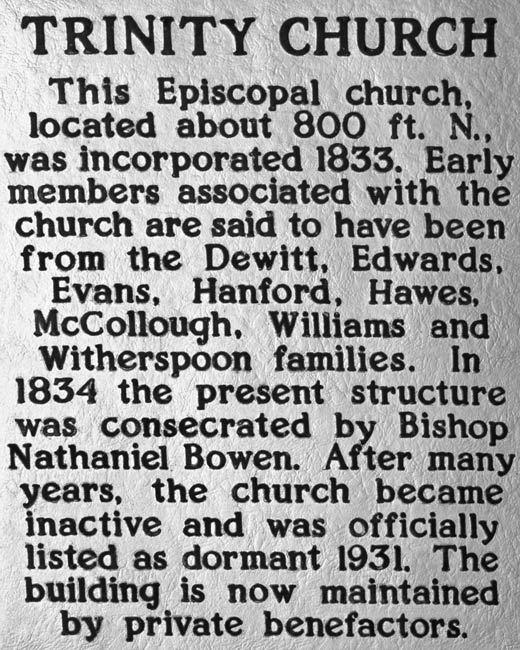 Trinity Episcopal Church was established on December 19, 1833 by seven men and their families to serve the needs of the local Episcopalians who had been previously worshiping with the St. David’s congregation in Cheraw. Immediately upon organization, the group set out to gather building materials and raise the money needed to build their own church building. In four months the group had erected the present building on a lot donated by Elias Gregg for a cost of $1,150. On April 25, 1834 the Right Reverend Nathaniel Bowen, D.D., Bishop of the Diocese of South Carolina, consecrated Trinity Church as “a house suitable for the worship of Almighty God”. 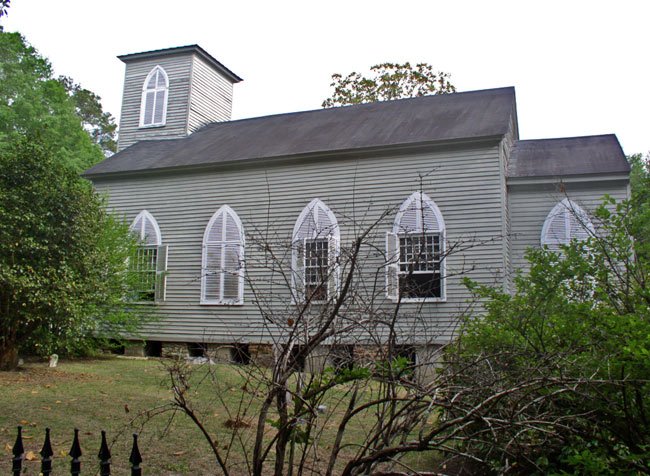 Two of the men who were involved in the establishment of Trinity were Major John Dewitt and his son-in-law, John McCullough. John McCollough’s son, John Dewitt McCollough, born in Society Hill on December 22, 1822, became very close to Trinity’s first rector, the Reverend M.M. Wheeler, and found himself intrigued with the construction process at Trinity. When the building was consecrated on April 25, 1834, the eleven-year-old McCollough gave five dollars of his own money towards the construction and placed his prayer book in the cornerstone of the new Episcopal Church. Why is this important for not only Trinity but for South Carolina, also? John Dewitt McCollough went on to become an ordained priest in the Episcopal Church and helped to design and build 22 churches in South Carolina and one in North Carolina, most of which have similar Gothic design features as seen in his home church of Trinity. 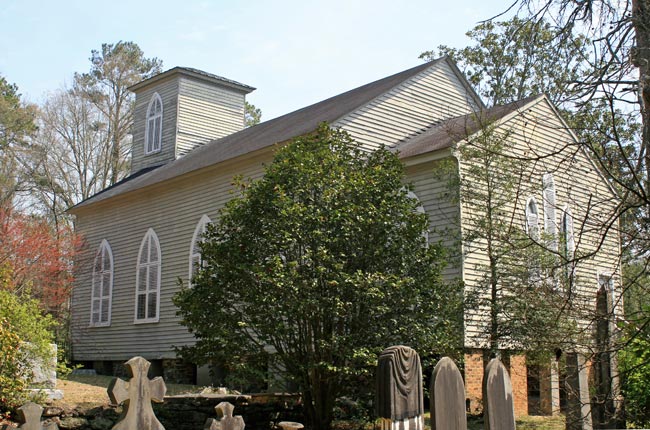 This balloon construction building that exists today is basically the same building that was erected in 1834, with very little changes or alterations. There is a good chance that what you see and touch today at Trinity was put there in 1834. The addition of a chancel was made under the direction of the Reverend J.S. Kidney for a cost of $2,000 when he was rector at Trinity between 1858 and 1865.

The other notable change has been the addition of an organ that was installed between 1873 and 1880 when the Reverend Tucker Lee was rector at Trinity. The organ was manufactured by W.B.D. Simons and Company of Boston and installed at a cost of $1,250, which is $100 more than the church building cost when it was built in 1834. The organ was originally a hand pump organ, and it was very often the responsibility of the children of the church to pump the organ during the services. Electricity has never been installed in the building, so now that the organ has a fan in lieu of the hand pump operation, an electrical cord is extended to an offsite service pole for electricity during the annual service. 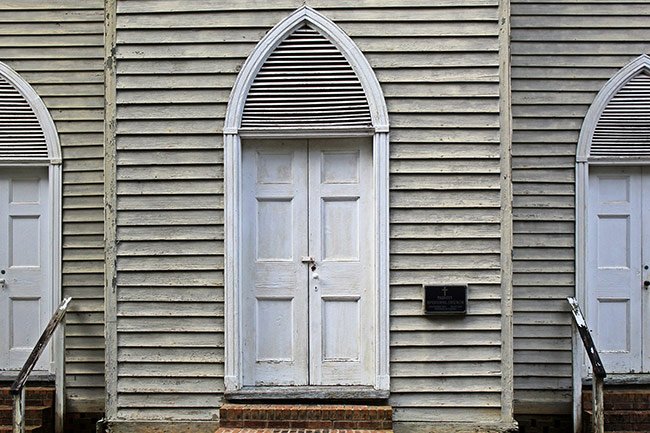 The strong building and supportive community have withstood the test of time for over 181 years. When the Charleston earthquake of August 31, 1886 rocked the then-52-year-old building, steel rods, commonly called “earthquake rods,” were added to hold it together. These rods are still visible today under the building, along with the original wooden pegs and carpenter marks. Preventive maintenance has been done over the years in the fact of new roofing, painting, foundation repairs, and general small carpentry repairs. These repairs have been paid for with funds lovingly donated by former member, historically-interested individuals, and generous donations at the annual services. Without these caring folks, the building may have met the same fate as the congregation itself did.

In 1930, due to declining membership and attendance, Trinity closed as an active church. Unfortunately, the original church records were destroyed in a residential fire in 1934, so any known historical accounts have been reconstructed from memory by the older members.