This marker commemorates Simon Brown, a former slave from Virginia who moved to Society Hill at the turn of the twentieth century. His residence was located on this site. Following the death of local community leader Lawrence Faulkner, Faulkner’s widow hired Brown to help maintain the family farm. Brown lived adjacent to the Faulkners. Although he could not read or write – literacy among slaves was prohibited – Brown was a gifted storyteller and entertained Mrs. Faulkner and her son, William J. Faulkner, with oral tales of “Brer Rabbit” and other characters. 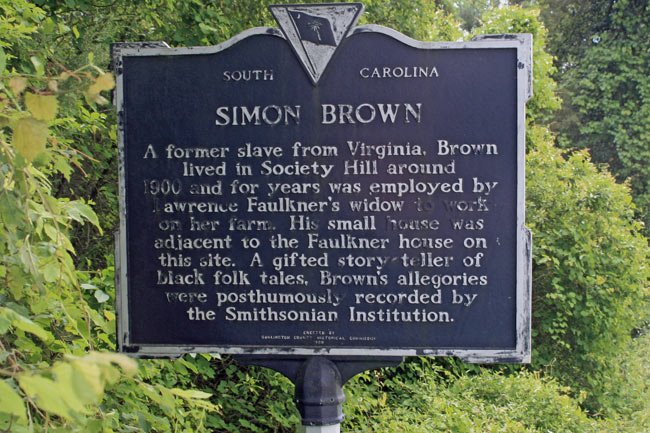 William J. Faulkner, who later became a minister and a dean at Fisk University in Nashville, Tennessee, as well as the first African-American president of the National Association of College and University Chaplains, documented Brown’s tales and compiled them into books, including one entitled The Days When the Animals Talked. The tales are allegories of the relationship between slaves and their owners, with the character of Brer (meaning Brother) Rabbit cast as the folk hero who withstood his oppressors, such as Brer Wolf. Brown’s stories are archived within the Smithsonian Institute and are not to be confused with Joel Chandler Harris’ Uncle Remus stories, which were also passed down by slaves and feature the character Brer Rabbit.