Today the Mayo High School of Math, Science, and Technology in Darlington is a highly-ranked magnet school. However, when it was built around 1950, it served Darlington’s African-American population during the height segregation. The school was named for Dr. Dwight Mayo, a minister and educator who sought to educate the African-American children here as early as 1889. 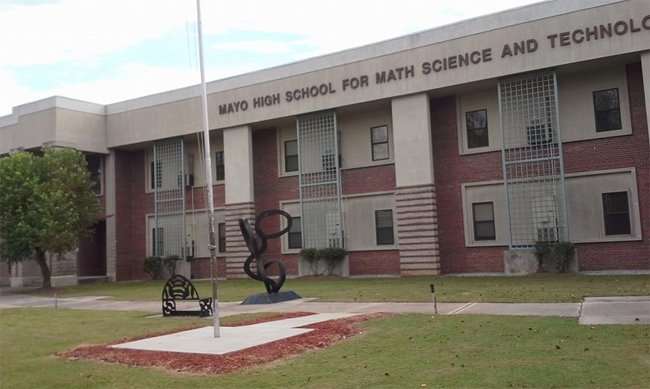 Jannie Harriot of Hartsville, 2014 © Do Not Use Without Written Consent

Darlington County schools were ordered to desegregate in 1970; however, a 1990 lawsuit brought to the school district claimed that desegregation never actually actually happened. As a result, Mayo High School closed in 1994 and joined nearby St. John’s High School, which was predominantly white, to form present-day Darlington High School. Two years later, the former Mayo High School was renovated and reopened as the Mayo High School of Math, Science, and Technology. Since then, the magnet school has won acclaim with U.S. News & World Report‘s America’s Best High Schools Silver Award six years in a row and was named a 2013 National Blue Ribbon School. The school consistently ranks in the top 5% of high schools nationally.

Contributor Jannie Harriot, a former teacher at Mayo High School, adds, “I attended Butler High School in Hartsville. There was strong rivalry between Butler and Mayo. Later I taught at Mayo from 1969 through 1971.”