The congregation of Catfish Creek Baptist, located near Latta, formed in 1802 and is the oldest in Dillon County. The present church was completed in 1883 and serves as the site’s fourth sanctuary. The congregation’s first home, a primitive log cabin, lasted roughly a decade before being replaced by a cypress structure. This served members until 1849, when a larger space was required and a third church was built. 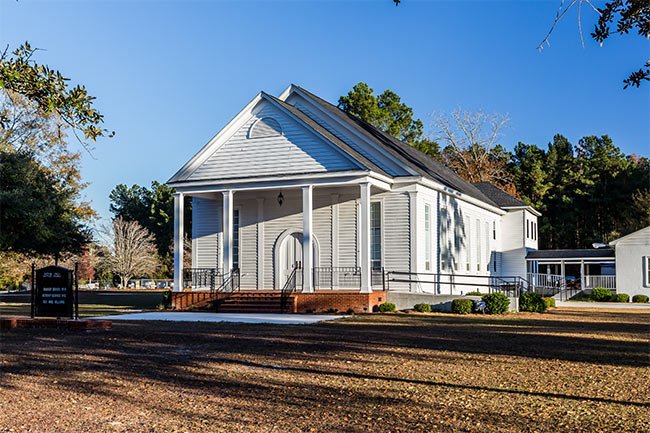 The present church measures 60 feet by 40 feet and is typical of many rural churches in South Carolina. A few embellishments make the overall appearance more sophisticated than average, however, such as an arched doorway and pilasters across the facade. The church remains relatively unchanged and features original furnishings such as pews on the side walls that connect into the wainscoting. Convex walls on either side of the altar provide space for baptismal changing rooms, and large doors in the floor, beneath the pulpit, conceal a baptismal pool. The current brick steps and porch across the front were added in 1970. Each window originally had louvered shutters, but these were removed during the 1970s renovations. A modern educational building, built in 1948, sits next to the church. 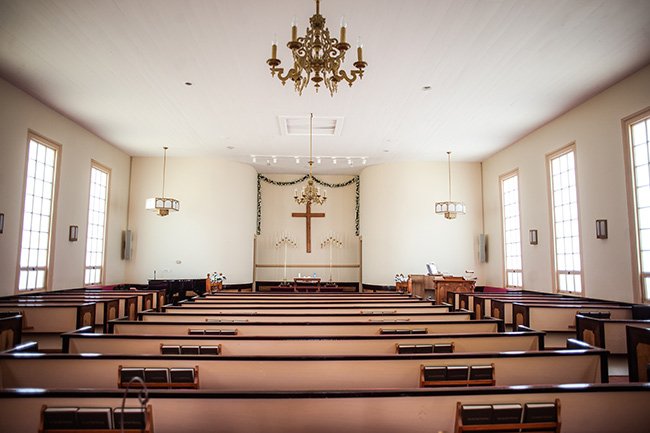 Andrea Knapp of Darlington, 2015 © Do Not Use Without Written Consent

According to the National Register nomination form “Catfish Creek Baptist Church typifies the significant Baptist tradition in the South Carolina Pee Dee region established by the Welsh Baptists who migrated from Pennsylvania (now part of Delaware) in 1735. The Pee Dee, second oldest center of Baptist influence for South Carolina, was settled by Welsh settlers who took advantage of Crown policy of land grants to encourage colonization in areas uninhabited by English speaking people.” 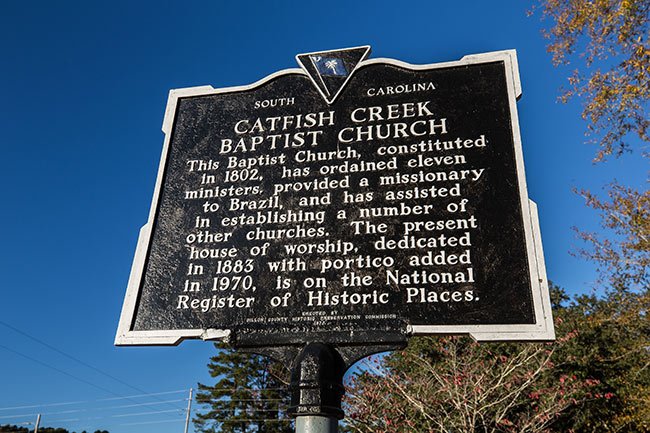 A Baptist church named Welsh Neck was constituted in 1738. Numerous branches grew out of Welch Neck with the oldest being Catfish Church, named for the nearby Catfish Creek. Catfish Church existed in that form from the 1750s to near 1790. Some twelve years later, the congregation of Catfish Creek Baptist formed using the Catfish name, slightly further upstream at its present location. This congregation is an example of how the Great Awakening (a term that refers to a number of periods of religious revival in American Christian history) swept through South Carolina between 1901 and 1803, increasing the number of Baptist believers by as much as 80 percent. Over the years, Catfish Creek Baptist has had eleven members become ordained ministers and one who served as a missionary. 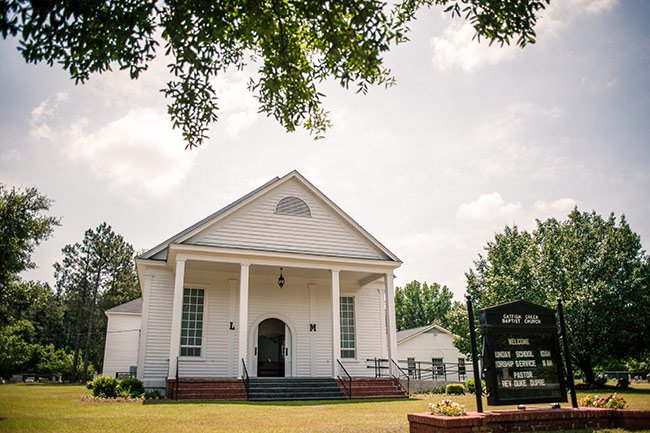 Andrea Knapp of Darlington, 2015 © Do Not Use Without Written Consent

Victoria Proctor, genealogist and author of Historic Latta which is hosted on SCIWAY, has compiled a great resource which includes cemetery inscriptions, church minutes, and brochure text published about Catfish Creek Baptist Church. You can also search for cemetery inscriptions at Find A Grave.

Catfish Creek Baptist Church is listed in the National Register:

Catfish Creek Baptist Church typifies the significant Baptist tradition in the South Carolina Pee Dee region established by the Welsh Baptists who migrated from Pennsylvania (now part of Delaware) in 1735. In 1802, another congregation, taking the name Catfish, was formed farther upstream from the location of the original Catfish Church, a branch of the Welsh Neck Church. This congregation, the oldest church congregation in Dillon County, built a crude, log church on this site that was replaced, within a decade, by a clapboard building constructed of cypress. In 1849, the cypress church became too small and a larger structure was built which was in use until completion of the present sanctuary in 1883. The present 1883 structure, constructed of pine, is 60 feet long and 40 feet wide. The façade consists of a centrally placed, stilted arch entrance with two, four-panel sliding doors which become recessed into the wall when opened. Side walls have twenty-four pane, rectangular windows identical to those of the façade. The interior remains largely unchanged. Pews of side aisles are unusual in that they are attached to the wainscoting. Convex walls on either side of the altar provide space for baptismal dressing rooms. An educational building, constructed in 1948, adjoins the sanctuary. The present brick steps and brick portico with pediment and four supporting columns were added in 1970. Listed in the National Register January 17, 1975.