Latta United Methodist Church in the Dillon County town of Latta was built in 1908. The community had been established in 1888 when Robert Latta surveyed the area and drew plans for what would become a freight station village along the railroad line between North Carolina and the Pee Dee. 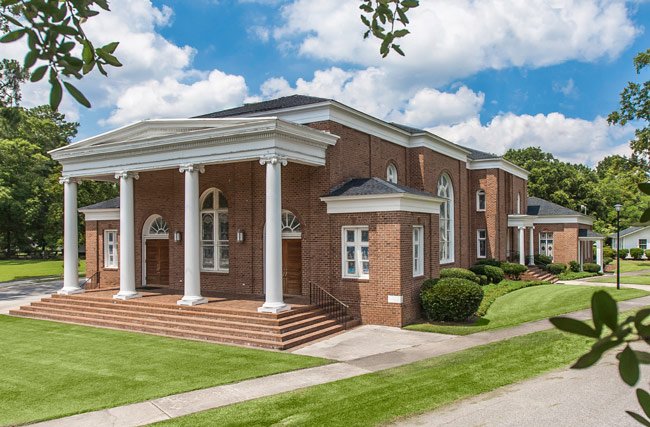 After the town was officially chartered in 1890, businesses began to open as well as a post office, operated by town Post Master and black merchant Robert Rose Bethea. People invested in Latta, building homes and churches in the burgeoning community. Latta United Methodist Church was formed 20 years after the founding of the town, and its blonde bricks formed in a one-story rectangle are in keeping with the style of early twentieth century architecture.

Latta United Methodist Church is listed in the National Register as part of the Latta Historic District #1:

Latta Historic District #1 consists of approximately fifty-five properties which define and contribute to the character of the historic district. All of the properties were constructed between ca. 1890 and ca. 1930. The district is primarily residential, mostly one- to two-story frame residences with late Victorian era details. The district contains several fine local interpretations of late Victorian era construction styles.

In addition, the district has examples of local usage of neo-classical details and more sophisticated examples of the Neo-Classical style. Early twentieth century bungalows illustrate the development of the area during the early century. The district also contains the Latta Public Library, the Latta Methodist Church, the Latta Baptist Church, and a few commercial buildings, most notably the Fairey Agency and Dr. L.H. Edwards dentist office. The library, the first in the county, is a town landmark and is architecturally important to the town as the work of Wilson and Sompayrac, Architects, of Columbia.