The Ellis Performing Arts Center in Latta is a testament to the vision of a determined group of people. Until the 1970s, the Latta High School auditorium was used by the school district and town for concerts and events. Sadly, the building burned in the early 1970s, and from that point the high school’s bare-bones, un-airconditioned gymnasium served dual purposes as a gym and a performing arts center for the following decades. Dillon County School District III badly wanted to replace the auditorium; however, the financial reality was that other educational buildings took precedent. 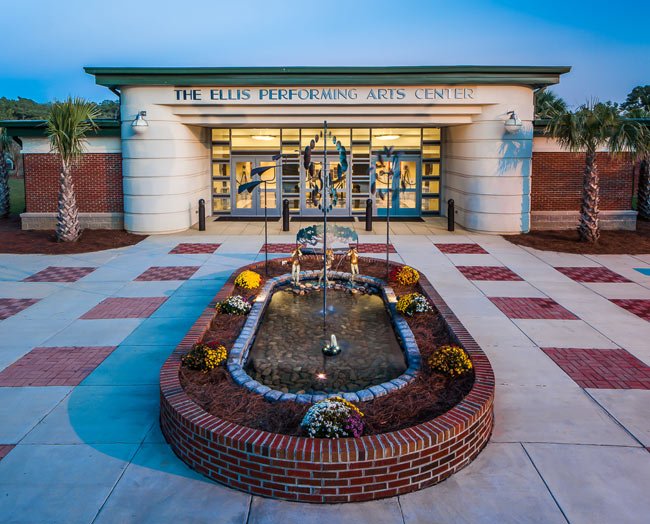 Finally in 2007 the non-profit organization Latta Schools Education Foundation was formed with the goal of raising money privately towards a new fine arts building. The community responded generously, with donations coming from individuals, local businesses, and several churches, whose contributions will allow them to use the building for weddings and other events. The building’s namesake donors, Fred and Bonnie Ellis, gladly gave $800,000 towards the cause. The Ellises are both graduates of Latta High School, and Bonnie is also a former teacher in the district while Fred had served as the accompanist for the high school’s chorus. Though the Ellises are no longer permanent residents of the town, they were happy to be a large part of the founding of a new center for the arts in support of the school district they both cherish.

Building a new auditorium from the ground up was more than the Foundation could afford; instead, the old gym, built in 1954, would be renovated into a state-of-the-arts building equipped for performances. The project began in 2011 and was completed in June of 2013. In celebration, a ceremony for the welcomed addition began at Abingdon Manor and culminated at the Ellis Performing Arts Center, featuring a concert by the Latta Community Singers and a piano rendition of the Latta High School alma mater by Fred Ellis.

The 20,000-square-foot center seats 458 people and will host everything from touring events such as a recent appearance by Svetlana Todinova, soloist for the Moscow Ballet, to local performances by schools and other artists. Students from the school district will be involved in all aspects of all events, including ticket sales, says Superintendent Dr. John Kirby.