One of this home’s four chimneys peers out from the overgrown vegetation that has taken the place of the elegantly landscaped lawn that once greeted guests. Not a typical design for a farm house, the Neoclassical home in Little Rock was completed in 1911 for James Willis Hamer, a farmer and South Carolina statesman. Hamer’s service to the Palmetto State began when he was elected to the South Carolina House of Representatives for two consecutive terms from 1917 through 1918 and again from 1919 through 1920. His time in office was soon followed by two additional terms, from 1925 through 1926 and again from 1929 through 1930. 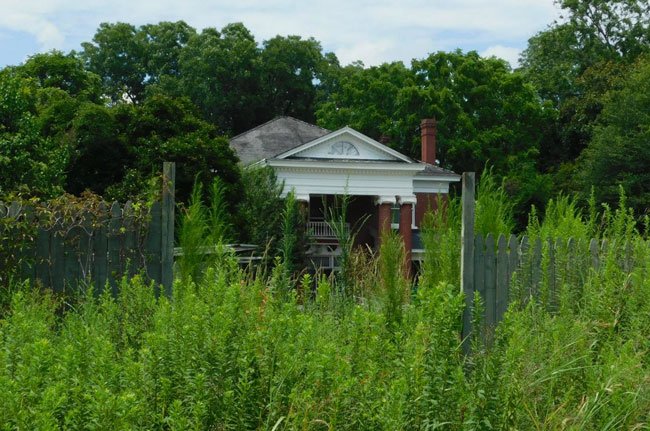 Hamer was next elected to the South Carolina Senate, serving four consecutive terms from 1931 through 1938. After Hamer’s death in 1940, the home was bequeathed to his son, James Willis Hamer, Jr., a farmer and merchant. Hamer, Jr.’s widow remained in the home until 1994, when another family purchased the estate. 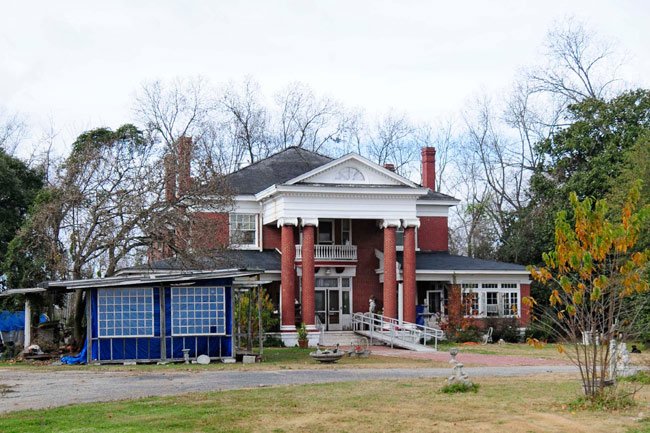 The home contains faux features, including brick veneer and a roof made of asbestos shingles to resemble slate. The dominant exterior features of the home are the symmetrical pairs of oversized Ionic columns. Outbuildings on the property pertinent to farm life include a former brick well house now acting as a pump house, a frame smoke house, chicken coops, kennels, and a garden shed. A pecan orchard behind the home was planted around 1920.

The James W. Hamer House is listed in the National Register:

The James W. Hamer House, built in 1910-11, is significant for its association with James Willis Hamer, farmer, state representative, and state senator of Dillon County during its first half-century, and as an outstanding and exuberant example of Neo-Classical Revival residential architecture of the first quarter of the twentieth century, designed by an unknown architect and executed by master builder and craftsman James Edward Diebler. Hamer, a Democrat, was elected to the House of Representatives in 1916, and served two terms in 1917-18 and 1919-1920, then two additional terms in 1925-26 and in 1929-1930. Hamer was elected to the Senate in 1930, and served four consecutive terms from 1931-1938. The house is a large two-story brick-veneered Neo-Classical Revival style residence set upon a rough stuccoed brick foundation and a beveled stone water table. Square in plan, it features four symmetrically-placed exterior end brick chimneys that rise through the boxed cornice, entablature and soffit and tower above the massive hipped roofline to terminate with corbeled caps. The house’s exterior consists of dense, highly-refined, red finish brick with thin and precise white mortar joints. The most dominant element of the house’s three-bay wide facade is the monumental, Ionic order portico with full entablature and pediment supported by two sets of paired brick columns with cast stone composite bases and plinths. The most unusual characteristics of the monumental columns are the oversized Ionic capitals with exaggerated volutes and the placement of those capitals perpendicularly to the portico’s facade. Set within the context of rural farmland, the house is surrounded by a yard that still exhibits some elements of a designed landscape. To the northeast of the house and its several contemporaneous outbuildings, structures, and farm-related ancillary buildings is a mature pecan orchard that was likely planted by ca. 1920.