The congregation of this now-vacant church in Little Rock was organized in 1786 on the banks of the Little Pee Dee River. Bishop Francis Asbury, the father of Methodism in America, traveled to South Carolina as part of his circuit and set up preaching stations where people could come and hear his sermons. A preaching station was established on the Little Pee Dee called the Gaddy Camp Ground. A meeting house was soon built on the property. 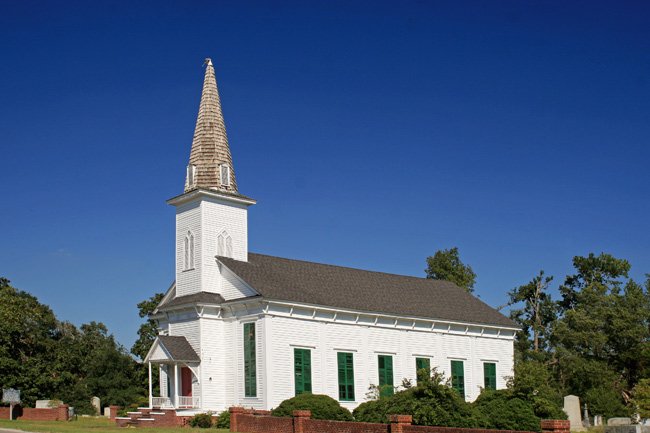 The church relocated to a neighboring site around 1803, and sometime between that year and 1814, the congregation became known as Liberty Chapel. The 1814 will of member Philip Bethea, reportedly a friend of Bishop Asbury, dedicates a portion of his estate to the repairing of Liberty Chapel. In 1823 land for a new church in present-day Little Rock, previously called Harlleeville, was given to the trustees of Liberty Chapel by Thomas Harllee, Sr. His son, Thomas Harllee, Jr., donated adjacent land for a school in 1844. Records of the church from this time have been lost, leaving no details of the new Liberty Chapel. However, the deed shows that it was located where St. Paul’s presently stands. 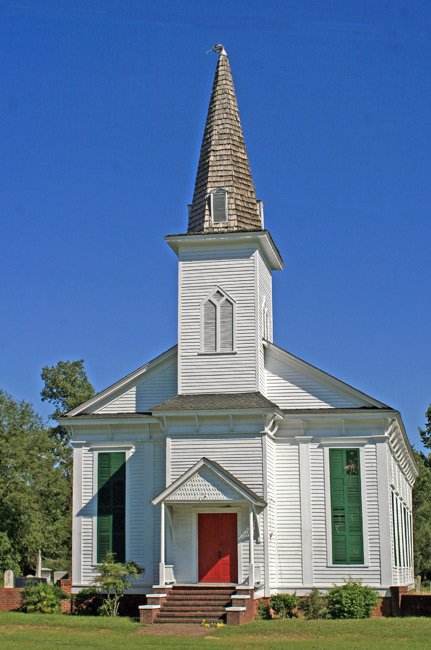 In 1871 the current edifice was built for the Methodist congregation, which changed its name from Liberty Chapel to St. Paul’s at that time. The church is noted for its Italiante Victorian architecture, which signified the transition between Greek Revival churches from previous years and ornate Queen Anne-style structures in the following decades. The congregation grew significantly in 1936 when neighboring Beulah Methodist Church closed and the shuttered church’s members joined St. Paul’s. However, despite the increase in membership, St. Paul’s also closed in 1949. The church and surrounding graveyard are maintained by a board of trustees supported by an endowment left by Cora Stackhouse Cottingham. 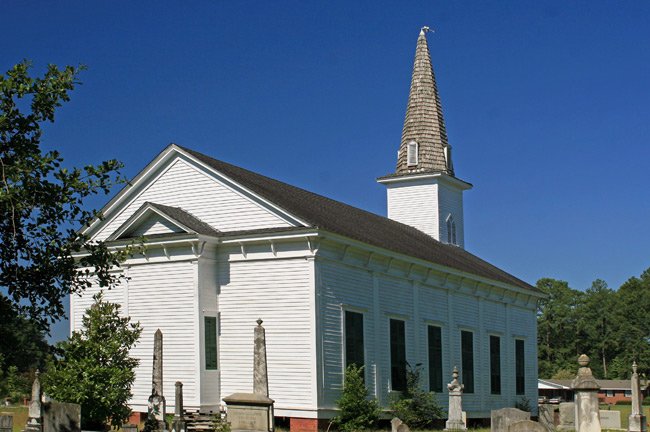 St. Paul’s Methodist Church is listed in the National Register:

St. Paul’s Methodist Church, constructed ca. 1871, is an example of the transitional Italianate Victorian vernacular style that developed between the Greek Revival and Queen Anne periods. The church is situated on a low brick pier foundation and is constructed of heart pine weatherboarding. A bell tower with steeple dominates the exterior of the church. The single entrance to the church projects from the lower section of the bell tower and is covered with a gabled roof that is supported by turned wooden columns and delicate wooden brackets. The porch roof is embellished with imbricated shingles in its gable. The upper section of the tower is accentuated with pointed arched louvered vents on each of its sides with an overhanging octagonal spire above. The tower projects from the center of the gable in an unusual fashion and is flanked by 12/12/12 shuttered windows. Simple wooden pilasters further flank the windows and give the illusion of supporting the box cornice which extends around the building. The sides of the church are divided into six equal bays with pilasters employed to divide each bay. Other delicate exterior ornamentation includes cyma recta cornice brackets, a weather vane finish on the spire, and lightning rods along the crest of the roof. The interior is indicative of the rectangular meeting house with the exception of a square projecting narthex under the tower and a projecting chancel apse at the rear. Interior woodwork is characterized by beaded paneling arranged in herringbone pattern. The ceiling, also of beaded paneling, is coved at the sides. Surrounding the church is the cemetery where many early church members are buried.