Downtown Summerville is home to the Church of the Epiphany, an Episcopal church founded sometime before 1884 and built in 1887. A member of the worldwide Anglican Communion, this predominantly black Episcopal Church boasts an active congregation. 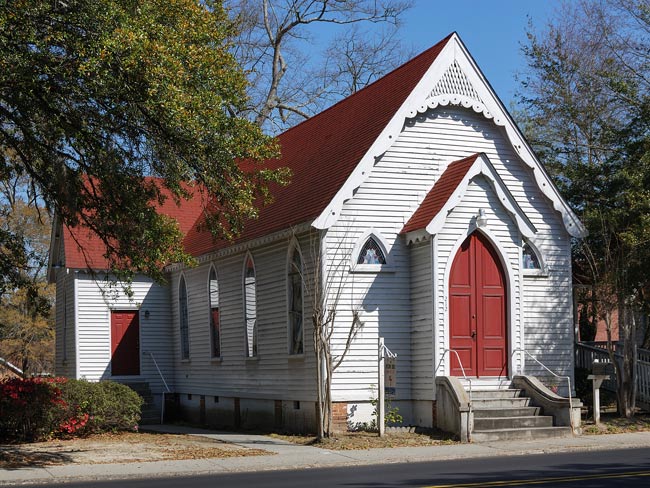 The land on which Epiphany sits was donated by Catherine “Kitty” Springs, and gracing the church grounds is a monument in her honor. She also contributed towards the cost of the building itself.

Catherine “Kitty” Smith Springs was a Charleston seamstress who owned a lucrative King Street dress shop. She married Summerville merchant Richard Springs and moved from the city to the village, bringing her business with her. Springs carried her sewing and design talents into millinery, and her wares were popular with the ladies of Summerville. Springs was biracial and her husband was white, and though marriages between people of different races generally were not accepted in these times, Springs managed to find professional success despite being both a woman and a minority during a period dominated by white men. However, when her husband died in 1889, he named Springs in his will as his housemaid rather than his wife.

Catherine Springs owned valuable property in downtown Summerville that she donated to the St. Barnabas Mission, which became a well-known public health center, school, and church. St. Barnabas primarily served poor whites and biracial descendants of local Indian tribes, a population that suffered the discrimination she knew well. The Mission, started by the Reverend L.F. Guerry of St. Paul’s Episcopal Church, operated with support from St. Paul’s. The site eventually became the location of the Dorchester County Hospital, built in 1937; today the former hospital building is used by Dorchester County Human Services. The St. Barnabas Mission chapel was moved to the Diocese of the Southeast campus on Main Street in Summerville in 1981 and is now called the Bishop Pengelley Memorial Chapel.