Though this church building in downtown Summerville dates to 1895, the congregation of Summerville Presbyterian is the oldest in Dorchester County. The story of the Summerville Presbyterians began with a group of New England Puritans who traveled south and formed a new settlement along the riverbanks of South Carolina. On December 5, 1695, the schooner Friendship debarked from Boston, Massachusetts, carrying several Congregationalists (also called Puritans) and their minister, the Reverend Joseph Lord. The group settled on land several miles northwest of Charles Towne along the Ashley River. They christened their new village Dorchester after their native Massachusetts township. 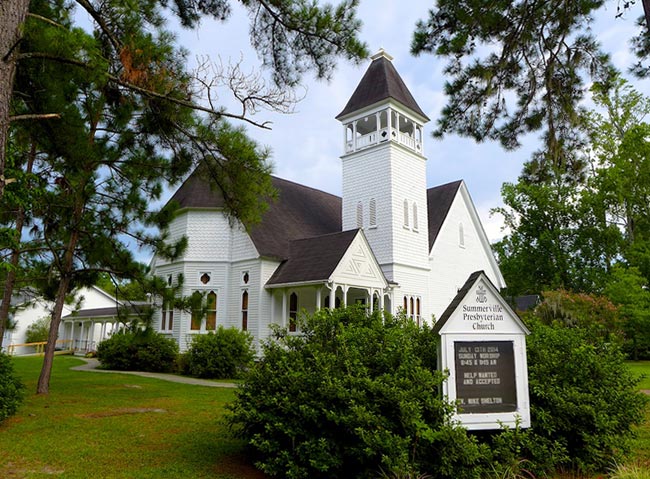 The settlement was modeled after their New England home in its layout, and by 1696 the Puritans had built a simple wooden meeting house for worship services. By 1700 they replaced the structure with a brick building that they called the White Meeting House. It is speculated that the name was selected in honor of the Reverend John White of Dorchester, England, who championed the Congregationalist movement – also called the separatist movement, as its members had separated from the Church of England. The White Meeting House was open to anyone for the purpose of worship. However, in 1706 South Carolina adopted the Church Act, which declared the Church of England the official church of the colony. South Carolina was divided into parishes, and the royal government required that Anglican churches and priests be maintained by the public in each parish. 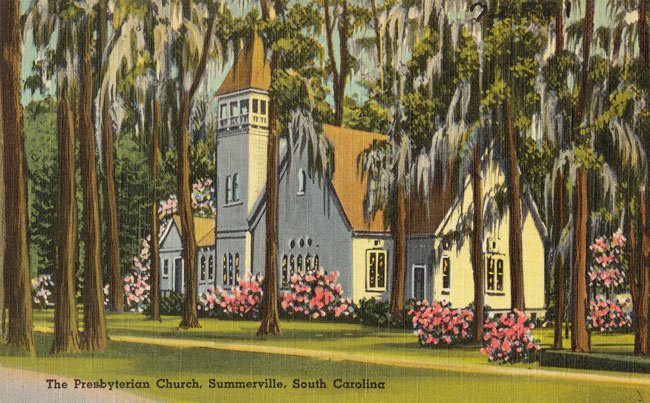 During this time Dorchester was in St. Andrew’s Parish, which included Charles Towne. By 1717 the parish was divided, and St. George’s Parish was formed on the upper Ashley River. A new Anglican church was built in Dorchester and called St. George. St. George attracted some of the Congregationalists – known to the Anglicans as “dissenters.” However, despite the Anglican church’s legal dominance, many Congregationalists continued to worship with their own denomination. Descendants of St. George’s Anglican Church eventually formed St. Paul’s Church.

Dorchester seemed to prosper fairly well with Indian trading and agriculture, as the land along the Ashley River was suitable for growing crops such as rice, the colony’s primary cash crop. Yet the 50-acre lots on which the Congregationalists had settled were not big enough to be subdivided for future generations and had also been over-cultivated after repeated growing seasons. Many decided to abandon Dorchester for land along the Midway River in Georgia and did so in 1753 after receiving two land grants for a combined total of 32,000 acres from the neighboring colony. Some Congregationalists had already left the settlement and owned larger plantations on more profitable land. The village of Dorchester stayed afloat despite this exodus, however, because many Anglicans in the area remained.

After the Revolutionary War, much of Dorchester was burned or dismantled, and residents fled the village for a new settlement slightly north of the original township. The old town was nearly uninhabited by 1788, though its ruins can be seen at the Colonial Dorchester State Historic Site. In the new settlement, sandy soil fostered stands of pine trees and also drained the land, providing relief from the flooded bogs of the Ashley that served as breeding grounds for mosquitoes.

Some people made the new settlement their permanent residence while other planters simply escaped here during the summer. The new village was called Summerville for the latter group. New Congregationalists also found their way here and, together with some remaining descendants of the original immigrants, they rebuilt the White Meeting House in 1794, which had been burned during the war. They worshiped here until building a new church in 1831 in Summerville, right around the time the South Carolina Canal and Railroad Company laid its tracks through the town. The people called their new church Summerville Presbyterian. Membership in the church increased with the advent of the railway, mirroring the population of Summerville in general.

On August 31, 1886, a major earthquake demolished much of the Lowcountry. Its epicenter was near Middleton Place on the Ashley River, and Summerville suffered extensive damage. Many of the remains of the village of Dorchester – including the White Meeting House – were destroyed during the earthquake, bringing the former settlement to ruins. Also damaged was the first Summerville Presbyterian Church, declared unusable in 1894. The building shown here replaced that one in 1895. The church bell was given to the church in 1898 by Mrs. E.B. Monroe of Tarrytown, New York.

Summerville Presbyterian Church is listed in the National Register as part of the Summerville Historic District:

Summerville originated as a pineland summer refuge for low country planters. Originally the streets were laid out without any plan and winding roads still characterize the oldest section of town. This “old town” lies in the southwestern portion of the historic district and contains about two thirds of the land and half the structures of the district. The South Carolina Canal and Railroad Company laid out the more regular “new town” in 1832. Streets run parallel and at right angles to the track laid in 1830-1831. The “old town” and that portion of the “new town” were incorporated into the village of Summerville in 1847. Following the Civil War, wealthy northerners began wintering there.

The town’s designation in 1887 as a health spot gave it an impetus as a resort, which was not lost until the Depression of the 1930s. There are approximately seven hundred structures within the nominated area; about 70% predate World War I. Uniting the different building styles of the town is a common sensitivity to the natural setting and to the local landscaping traditions reflected in streetscapes, parks and gardens. Raised cottages, Greek Revival influenced, and Victorian/Queen Anne and other turn of the century structures are found throughout. Antebellum buildings are principally located in the southern and western areas. Churches are located in the center of the district, and the commercial buildings—most dating from around 1900—are located on either side of the town square in front of the present town hall, which faces the railroad. Additionally, Summerville has been the center for azalea culture and there is a variety of azaleas popularly named “The Pride of Summerville.”