St. George has been the county seat of Dorchester County since the county was formed from Colleton County in 1897. Though more rural than the county’s largest town of Summerville, St. George is home to the county courthouse. Therefore, residents from all over must make the trek to the upper part of the county for most official business. The mural seen below in Downtown St. George was lovingly painted by artists Steve and Virginia Bond in 2009. 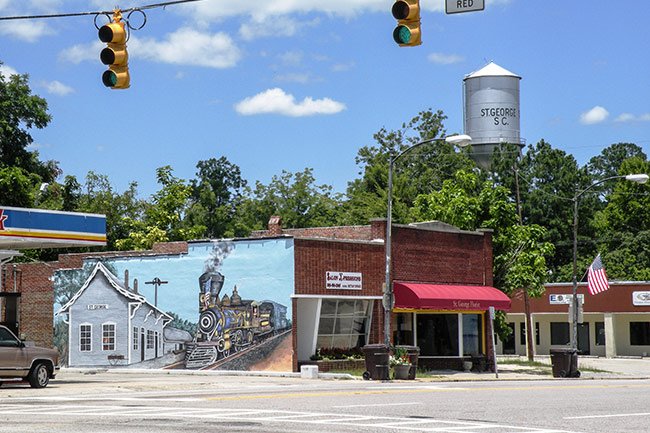 Like many towns throughout South Carolina, St. George faced an economic boom with the invention of the railroad. Businesses continued to open and more homes were constructed to house new residents. Below is an image of the St. George depot in the early 1900s, the depot no longer stands today. 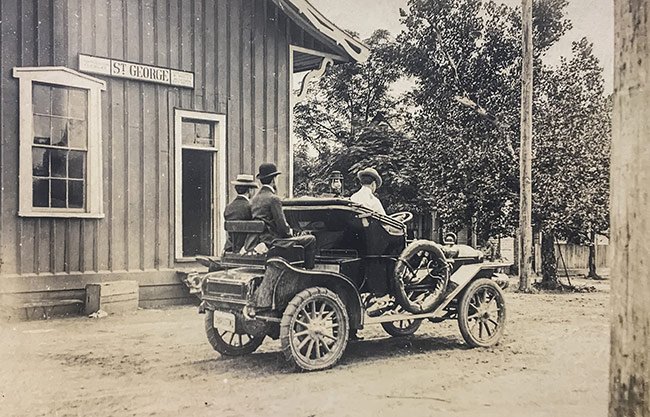 Charleston Museum Archives, Early 1900s © Do Not Use Without Written Consent

With the opening of interstates and alternate routes, the use of the railroad became less prominent. Without the railroad there to support the local economy, businesses closed and decay set in. Many of the towns along South Carolina’s backroads are in a state of ruin, hanging on to the prominence of what once was. 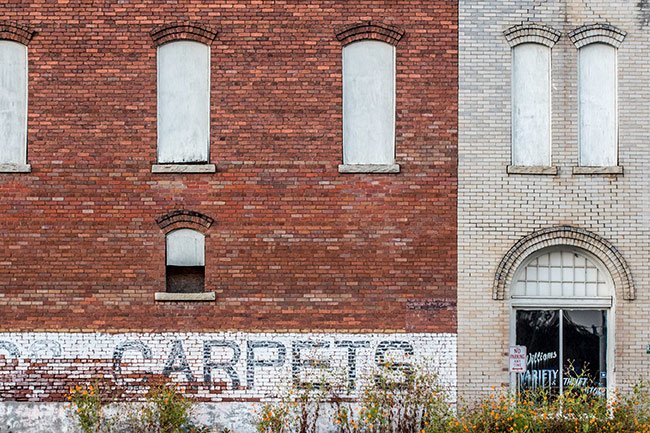 Though plenty of businesses are still closed, St. George has great proximity to both Interstate 26 and Interstate 95, allowing businesses along those thoroughfares to prosper. In recent years, the county has made remarkable strides in restoring historic structures that had fallen into near ruin such as the Koger Murray Carroll House, a historic plantation house and stagecoach stop which is the oldest house in the county dating to near 1790. The historic Rosenwald School is currently undergoing plans for a complete restoration as well. 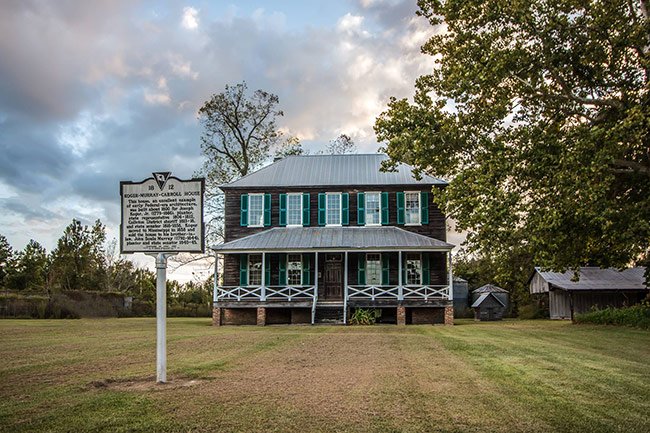 The area’s motto is “The Town of Friendly People” which can be seen in the photo below depicted in the mural on the corner of Main Street. Interestingly, the people of St. George and its surrounding communities consume more grits per capita than folks in any other place in the world, according to research conducted by the Quaker Grits Company. 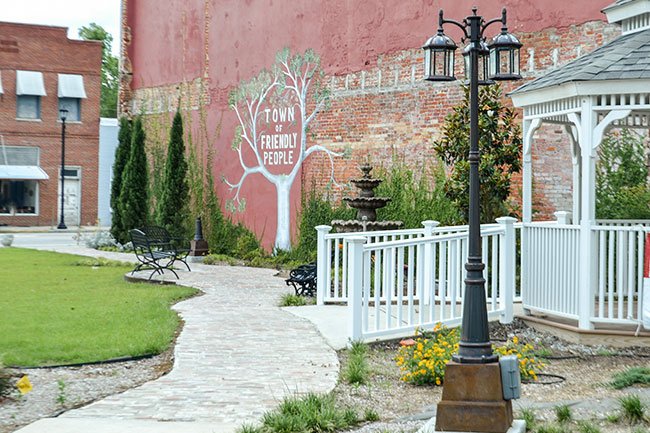 To celebrate this southern delicacy’s dominance in the kitchens of St. George, the town hosts the annual World Grits Festival each spring, sponsored by Quaker Grits. Activities include a 5k race, sampling of local grits recipes, and the Rolling in the Grits contest. The event attracts more than 30,000 people each year to celebrate and partake in the popular breakfast dish. 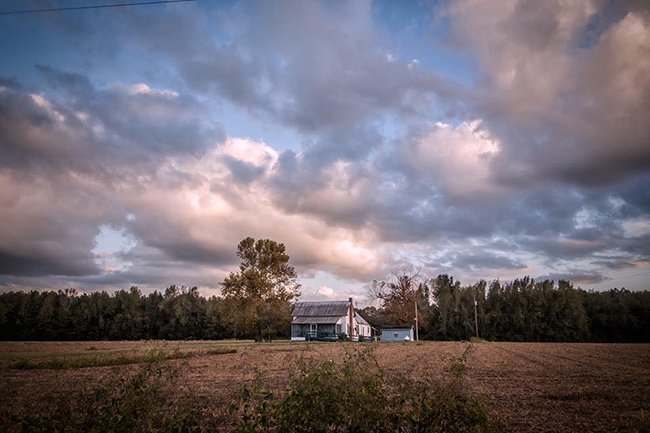 Largely rural in nature, the area around St. George is littered with picturesque relics of the area’s strong agricultural past and present. Though packing sheds may largely be associated with Horry County, certain examples still exist around the Lowcountry. The photo below depicts a tobacco packing barn or shed which stands along the old Wire Road, an original Indian Trading Path. 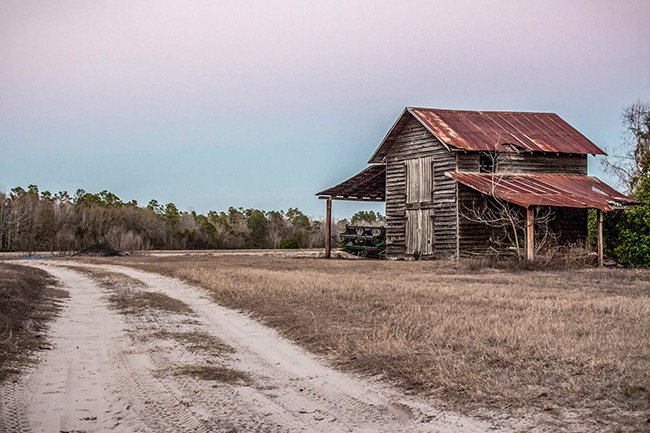 Farmhouses are also a common sight in and around the old town. The house below is one seen near the old Wire Road. Though the home is vacant, life still exudes from its sun-drenched porch and lightly rocking swing. A nearby structure, known as the Appleby Home, was recently featured on the DIY Network’s Renovating Charleston television series where it underwent a complete renovation. 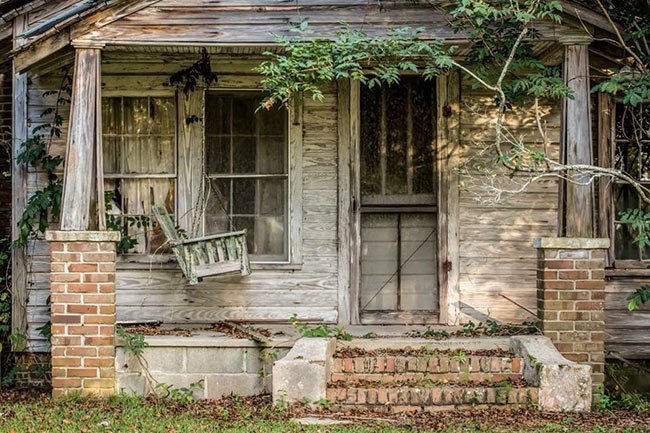 Florence artist, Debbie Broadway, painted the farmhouse porch seen above in one of her beautifully detailed pieces of artwork. She mentioned that “it’s honestly a journey for me. My attraction was to deteriorating wood, colors, etc., and the mystery in the stories they have” 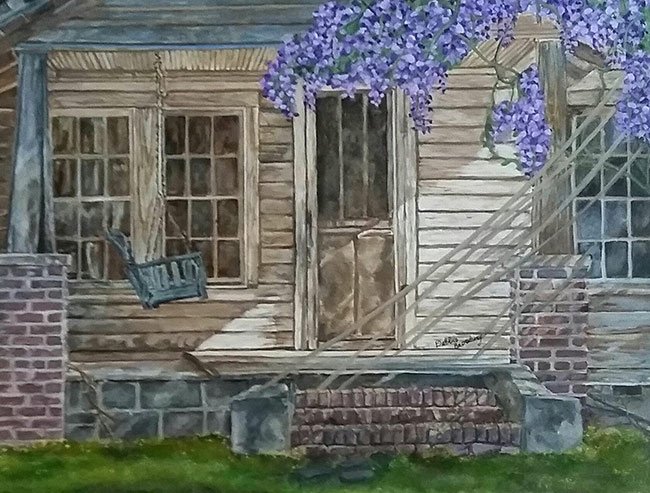 Debbie Broadway of Florence, 2018 © Do Not Use Without Written Consent 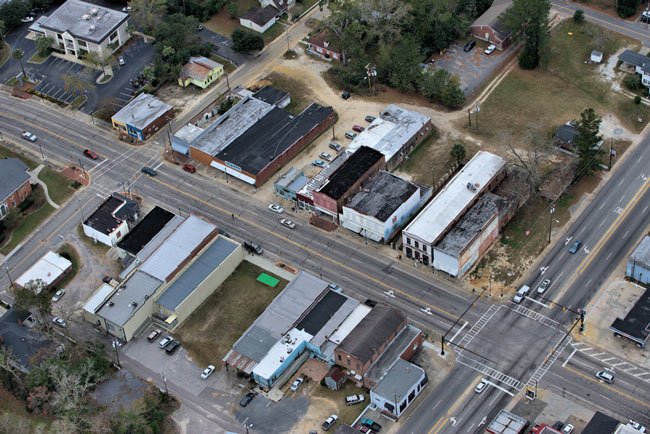