This Reconstruction-era church in Johnston was formed on February 21, 1875 when a group of Baptists met in a public building to hear a sermon preached by the Reverend W. A. Pearson from nearby Ridge Spring Baptist Church. The congregation was initially led by the Reverend Luther Broadus of Edgefield Baptist Church, who divided his time between the two churches. For the first two years, worship was held in different public buildings, including a local schoolhouse. 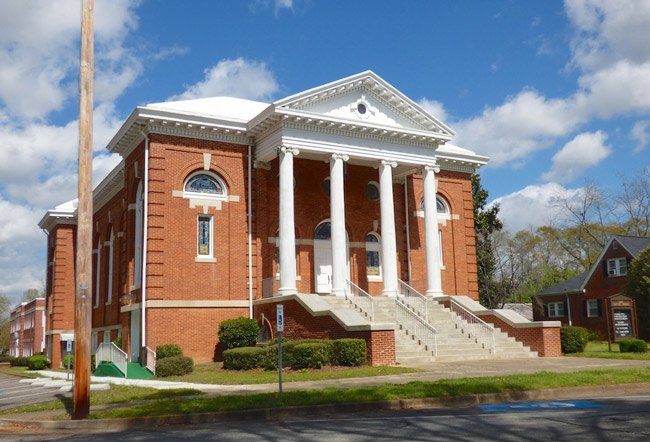 As the church grew, the need for its own house of worship also grew. In 1877 a simple wooden church was built on land donated by Mrs. E.J. Mims, and within a few years the church received its first full-time pastor, Dr. W. T. Hundley (1882). Under Dr. Hundley’s leadership, the congregation continued to expanded, and an addition to the first church was built. However, by the early twentieth century, even the addition was not large enough to house the congregation, which by then included over 200 members. The wooden church was torn down, and the present Neoclassical brick church was built in its place in 1911. This edifice continues to serve the Baptist community of Johnston today.

The First Baptist Church of Johnston is listed in the National Register as part of the Johnston Historic District:

The Johnston Historic District is composed of 146 properties within and adjacent to the town of Johnston. Centrally located in the historic district is the three-block long commercial area around which are several residential neighborhoods. The commercial and residential properties that form the district reflect the period of Johnston’s greatest growth—from approximately 1880 to 1920—and include a variety of architectural designs such as Italianate, Second Empire, Victorian, Queen Anne, and Neo-Classical. The district also includes three churches and the town’s cemetery. The railroad, which passes through Johnston, was the primary cause for the creation of the town and continues to be a daily reminder of the town’s early transportation history. When the railroad was constructed it passed directly through a plantation owned by Dr. Edward J. Mims, and today this land makes up much of the town of Johnston. The railroad station was named “Johnston” in honor of the president of the Charlotte-Columbia-Augusta Railroad. Mim’s son Matthew Hansford Mims reputedly laid out the town, and his plan designated Johnston as an area one-mile square with its mid-point at the intersection of Lee and Calhoun Streets. Parallel and perpendicular streets also were designated and each block was divided into four one-acre lots.