Also called the Crouch-Halford House, this stately Neoclassical home in Johnston was constructed around 1906 on land that belonged to town founder, Dr. Edward J. Mims. Dr. Mims owned 1,200 acres of land which he purchased from Isaac Bush, who had operated a tavern on the site. Dr. Mims built a home and established a plantation here, though he eventually persuaded the Charlotte-Columbia-Augusta Railroad to lay tracks through his property. The town was subsequently established in 1870 and named for the railroad company’s president, W.P. Johnston, at the behest of Mims. 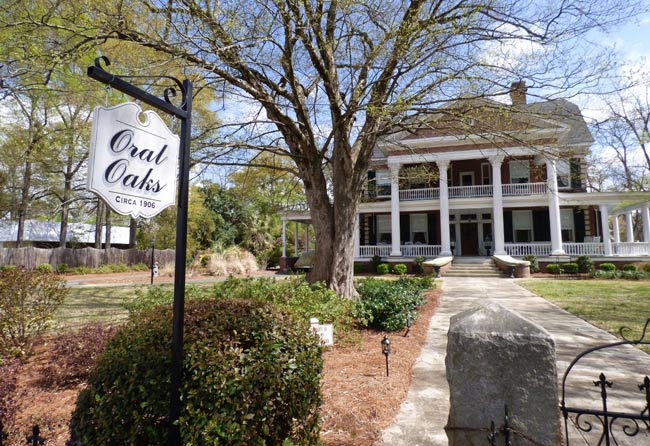 When renowned builder Mark Toney Turner constructed this manse for merchant H.W. Crouch in the early twentieth century, the former Mims home was relocated to the back of the property and burned. Today the property is called Oral Oaks and is a private residence, though it is sometimes used as a wedding site. A business called the Pink Willow Boutique also operates in a cottage on the grounds of the historic home.

Oral Oaks is listed in the National Register as the Crouch-Halford House within the Johnston Historic District:

The Johnston Historic District is composed of 146 properties within and adjacent to the town of Johnston. Centrally located in the historic district is the three-block long commercial area around which are several residential neighborhoods. The commercial and residential properties that form the district reflect the period of Johnston’s greatest growth—from approximately 1880 to 1920—and include a variety of architectural designs such as Italianate, Second Empire, Victorian, Queen Anne, and Neo-Classical. The district also includes three churches and the town’s cemetery. The railroad, which passes through Johnston, was the primary cause for the creation of the town and continues to be a daily reminder of the town’s early transportation history. When the railroad was constructed it passed directly through a plantation owned by Dr. Edward J. Mims, and today this land makes up much of the town of Johnston. The railroad station was named “Johnston” in honor of the president of the Charlotte-Columbia-Augusta Railroad. Mim’s son Matthew Hansford Mims reputedly laid out the town, and his plan designated Johnston as an area one-mile square with its mid-point at the intersection of Lee and Calhoun Streets. Parallel and perpendicular streets also were designated and each block was divided into four one-acre lots.