Horn Creek Baptist Church in Edgefield was founded in 1790, shortly after a Revolutionary War skirmish took place on this site. The simple meeting house was built for the congregation in 1822. Horn Creek is one of the oldest Baptist churches in the upper part of South Carolina, and the church structure reflects the uncomplicated style of early Baptist settlers. 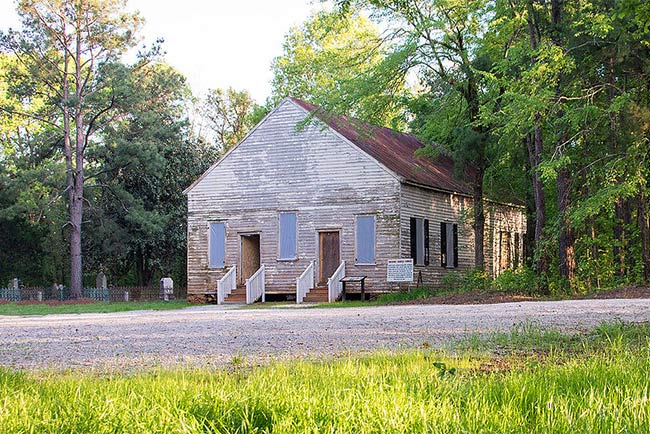 Horn Creek Baptist Church in Edgefield was near ruin just a few shortyears ago.
Thanks to a small team of volunteers, the church has made a remarkable recovery.
(Bill Fitzpatrick of Taylors, 2015 © Do Not Use Without Written Consent)

Despite its simplicity, the church bears a coupe of unusual features. First, the ceiling features a flourish of decorative painted designs, as well as a small angel painted in each of its four corners. Second, the ironwork surrounding the graveyard is more ornate than the typical fences of rural churches from this time. 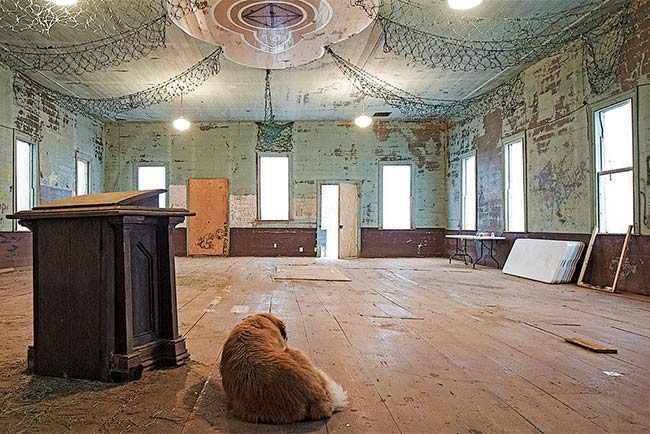 Here, a dog peacefully watches over the church. When Bill Fitzpatrick first photographed Horn
Creek in 2012, he “didn’t give it much chance of surviving another decade.”
(Bill Fitzpatrick of Taylors, 2015 © Do Not Use Without Written Consent)

A single door behind the pulpit (seen below) leads to the church’s namesake creek, which was used for baptizing members. In 1781, during the American Revolution, a Patriot regiment led by Captain Thomas Kee defeated a group of Tories at Horn Creek, killing their leader, Captain Clark, and imprisoning his troops. 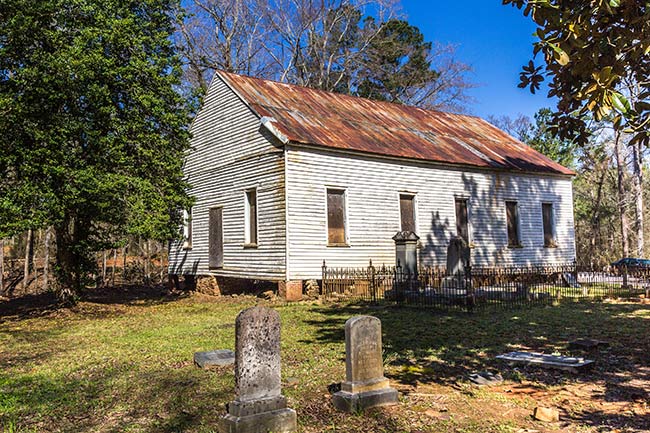 At center left, you can see a door, now boarded, that once led from the sanctuary to Horn Creek.
Congregants were baptized there, and it is for this body of water that the church is named.
(Kent Rowell of Gaston, 2015 © Do Not Use Without Written Consent)

Today the church is owned by the Edgefield County Historical Society, which recently led an effort to restore the old building. A cottage was begun on the property in 2104 to house a caretaker to both work on the church and prevent future vandalism. The cottage was dedicated roughly a year later, on March 29, 2015. 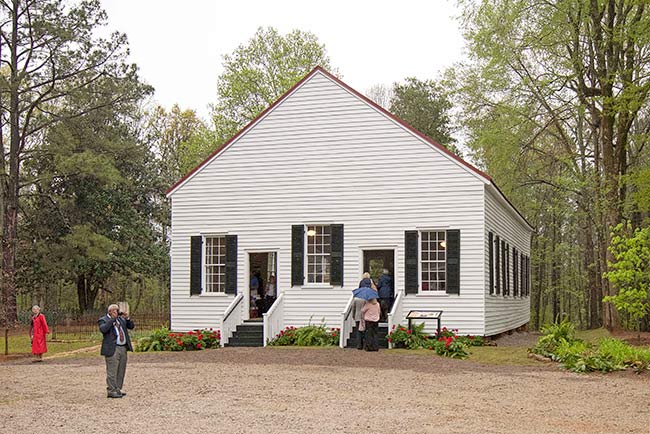 Horn Creek Baptist, post-restoration. What a difference love and a little money make!
(Bill Fitzpatrick of Taylors, 2018 © Do Not Use Without Written Consent)

The Historical Society hired Mr. Barney Lamar, an experienced reservation expert, to serve as the caretaker. Under his watch, the church and its grounds have come full circle, and the church was again in use by 2018. 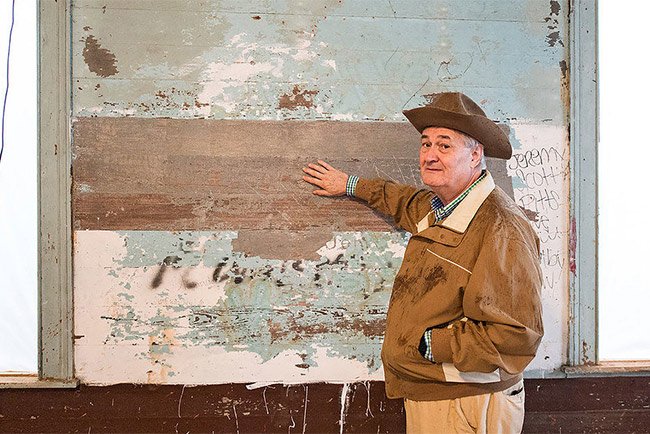 Mr. Barney Lamar was hired as Horn Creek’s caretaker by the Edgefield County Historical Society. It is rare for rural churches to have a dedicated caretaker. Mr. Lamar has worked on high-level restorations throughout his life, including chapels in Europe and the Biltmore Estate in Asheville.
(Bill Fitzpatrick of Taylors, 2015 © Do Not Use Without Written Consent)

Horn Creek Baptist Church is listed in the National Register:

One of the oldest Baptist churches in the South Carolina Upcountry, Horn Creek was incorporated in 1790. Today it is one of the few remaining meeting house style churches in the area reflecting austere simplicity and manifesting frugality of early settlers. The one-roomed church is supported by fieldstone foundation piers and has wooden steps leading to two front doors that are hinged to fold in the center. A door behind the pulpit leads to a creek for baptizing.

The church’s adjoining cemetery has excellent iron work including a cast iron gate at the Bettis plot which has a design that incorporates a Palmetto tree flanked by lambs and roses. A wooden fence next to the Bettis plot surrounds fieldstone markers. Revolutionary War activity in the Horn Creek area included a 1781 skirmish in which patriot Captain Thomas Kee of Colonel Leroy Hammond’s regiment, attacked a Tory party under Captain Clark. Clark was killed and the entire company was made prisoners. 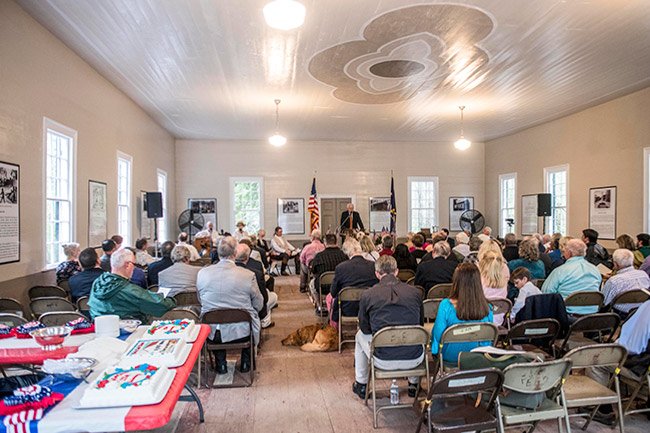 Horn Creek Baptist has been fully restored, but what’s better than a church that’s safe?
A church that’s used! The group above gathered together in April 2018.
(Bill Fitzpatrick of Taylors, 2018 © Do Not Use Without Written Consent) 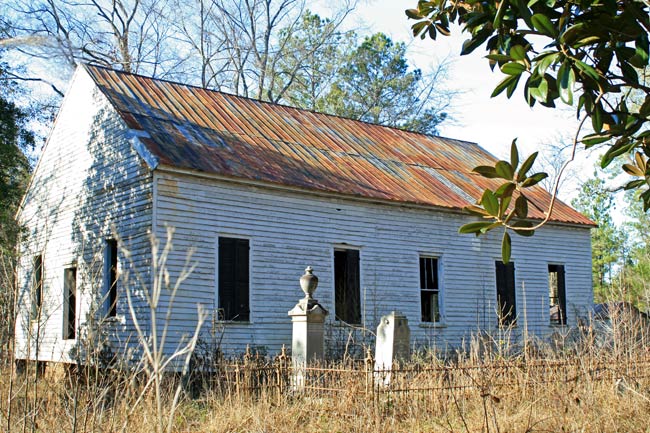 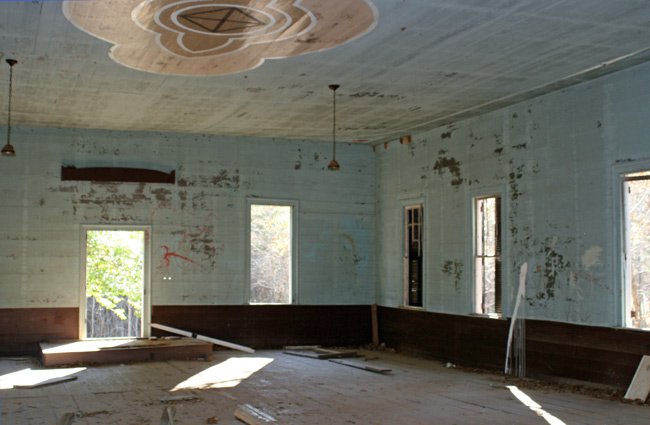 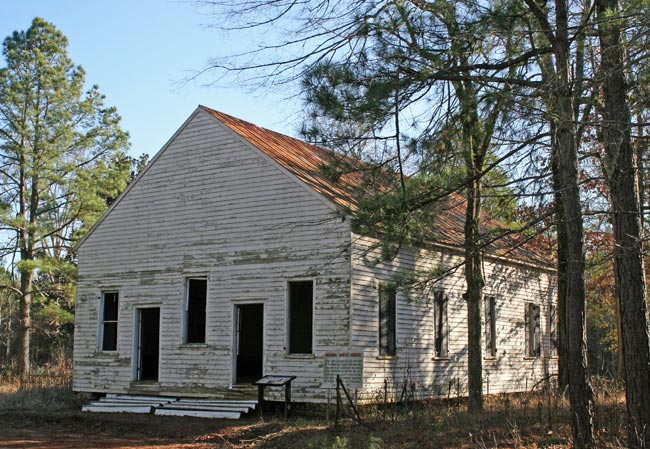 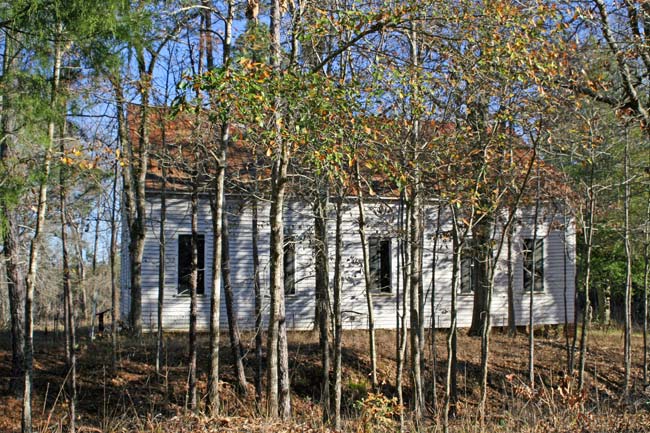 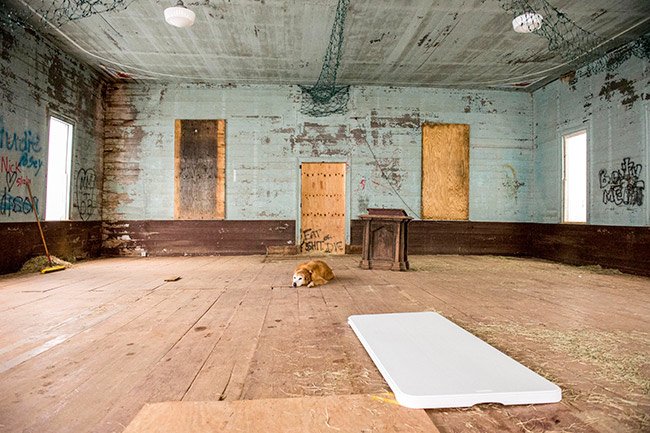 While Horn Creek Baptist Church is no longer in danger, many other rural churches in South Carolina are still in desperate need of care. Bill Fitzpatrick, a former member of the South Carolina Picture Project board, has partnered with Preservation South Carolina to help save endangered churches such as Lower Long Cane. Their beautiful book, South Carolina’s Sacred Spaces, highlights the challenges facing many of our state’s historic churches going forward.

This generously-sized volume, which features 254 pages of extraordinary images and Bill’s personal accounts of the churches and their histories, is a wonderful way for us, as ordinary citizens, to help save some of our state’s most cherished landmarks. 100% of the proceeds go to a building fund to help maintain and protect these churches. Please treat yourself to a copy today!