This sprawling school building of blue granite was built in Winnsboro around 1941. However, Greenbrier School existed years before this structure was built. The Winnsboro Granite Company formed in the 1880s and sold locally-quarried blue granite all over the country; the stone, referred to as the “silk of the trade,” was used to build such notable landmarks as the Flatiron Building in New York City. The company acquired a steam railway, built in 1883, connecting the Woodward Quarry in the nearby community of Rion to the Southern Railroad in Rockton. In 1893 the company built a standard-gauge railroad connecting the quarries to the newly-acquired Anderson Quarry. The rail line became its own business entity in 1936 – the Rockton and Rion Railway – though it was operated by the Winnsboro Granite Company. Today the railway is owned and run by the South Carolina Railroad Museum. 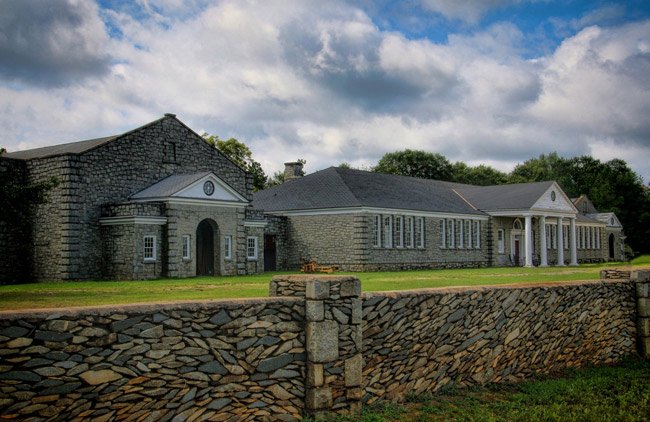 Benjamin Heyward of Charleston relocated to the area in the early twentieth century to oversee the Anderson Quarry. Prior to his accidental death at the quarry in 1930, he encouraged local parents to send their children to Greenbrier School. Apparently, Greenbrier School had no accreditation during its early years; increasing the educational standards of the school and receiving the coveted status of accreditation was important to Heyward. Most parents in the quarry town sent their children to the prestigious Mt. Zion Institute. However, Heyward wanted to keep families in the close-knit community that encompassed the quarries, so he recruited esteemed professors to teach at the Greenbrier School and rewarded successful students with parties and activities such as rides along the Rion to Rockton train to view the Anderson Quarry.

This school, which is guarded by a granite fence built around 1951, soon replaced the first Greenbrier School. Today the former stone school is used as a private residence.

The Greenbrier School is listed in the National Register as part of the Rockton and Rion Railroad Historic District:

The Rockton and Rion Railroad Historic District is significant as a collection of buildings, sites, structures and objects associated with the quarrying, finishing, and transporting of Winnsboro blue granite between ca. 1883 and ca. 1945. The district is composed of forty-five properties located along the twelve mile stretch of the Rockton and Rion Railroad in south central Fairfield County. The district includes the Anderson and Rion Quarry sites, industrial buildings and structures associated with granite quarrying and finishing operations, residences constructed for management personnel at Anderson Quarry, the Rockton and Rion Railroad line and side tracks, two steam locomotives from the Rockton and Rion Railroad, and a ca. 1941 school building constructed of granite. The district retains sufficient integrity to reflect the history of the Winnsboro Granite Company and granite quarrying in the area between ca. 1883 and ca. 1945. The properties, with the exception of Greenbrier School, are grouped into two complexes, the Anderson Quarry-Phillips Granite Works and the Rion Granite Quarry-Brooks Granite Company. Most of the buildings and structures in the Historic District were constructed of Winnsboro blue granite, with the majority constructed from the late 1920s to the late 1930s.