Belin Memorial United Methodist Church sits on land once owned by its namesake, the Reverend James Lynch Belin (pronounced Blane). Belin was a Methodist minister, planter, and philanthropist from the Waccamaw Neck area who, in 1859, died in a tragic carriage accident (1). In his will, Belin bequeathed his summer home, Cedar Hill, and 100 surrounding acres to the South Carolina Conference of the United Methodist Church (1). Belin Memorial UMC now stands at this site. Murrell’s Inlet, the body of water for which the surrounding community is named, flows directly behind the church. 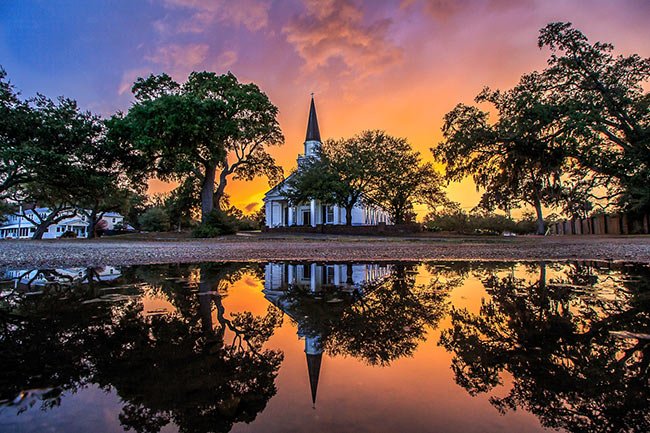 In 1836 the Reverend Belin established Oakland or Oatland Methodist Church (sources differ on the exact name) near Pawleys Island (2, 3). Pastor Belin led its congregation until his death 23 years later. In 1925, the cedar planks of Oakland’s sanctuary were dismantled and carried to Cedar Hill (3). (We use Oakland here because, given the abundance of live oak trees in Georgetown County, it seems the more likely moniker.) From these, a new church was built which served Belin Memorial’s congregation for close to 70 years. By 1991, Belin Memorial had outgrown its sanctuary and donated the edifice to Joseph B. Bethea United Methodist Church, named for South Carolina’s first black Methodist bishop (3). Still in use, it is now located on West Perry Road, west of Myrtle Beach. Bethea UMC writes this about the history of the church:

The materials were from the Oakland Methodist Church near Pawleys Island, which at one time Rev. Belin built and preached. Mrs. William L. Oliver asked the last remaining member of the church, Mr. Frank Lachicotte, for the building which was raised and moved under the guidance of [Belin Memorial UMC] Pastor W. T. Bedenbaugh (2). 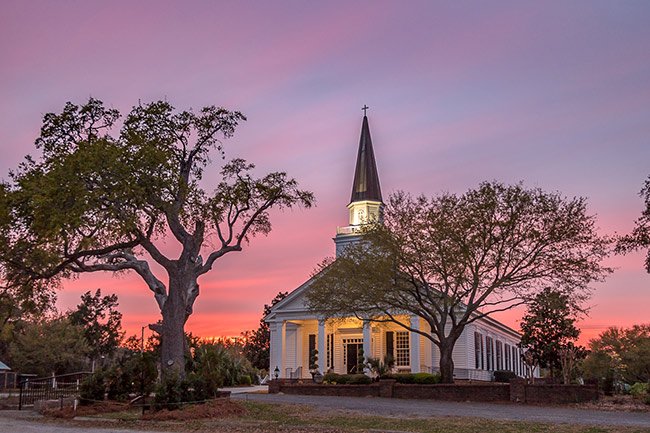 The 1925 church, built from Oakland’s repurposed planks, required renovations in 1955 (3). In 1977 the entire church was moved 75 feet, an endeavor which also included doubling the size of the sanctuary. This intensive project was completed in 1978, with much of the work undertaken by members of the church and then-pastor, the Reverend Wesley Farr (3). Belin Memorial’s congregation continued to grow, and by 1991, needed a still larger sanctuary. The current structure – which was built to resemble the original church – was dedicated in 1992 (3). 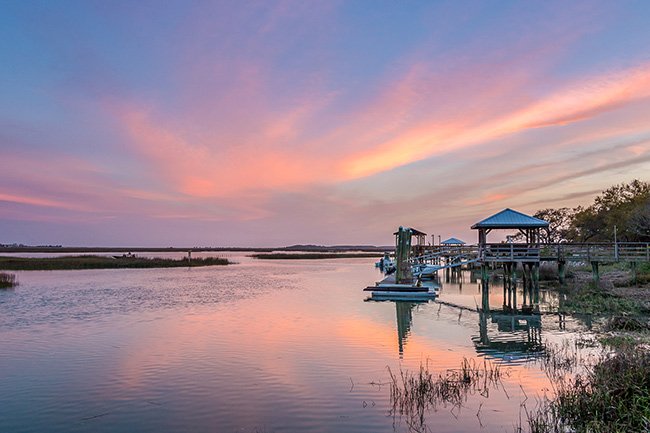 Now with a membership of around 2,000, Belin Memorial United Methodist Church continues serving the Waccamaw Neck community, carrying on the legacy of the church’s namesake. In addition, a trust established with funds from Pastor Belin, who owned a successful rice plantation, continues to aid missions selected by the South Carolina Conference of the United Methodist Church (1).

Belin Memorial’s seawall cross provides congregants a place to worship outdoors. This is an important tradition in the American Methodist church, where many congregations first gathered beneath brush arbors to await circuit-riding preachers. Only later were permanent churches established with presiding ministers. Belin Memorial’s cross has become a focal point of the community and is a favorite among photographers. 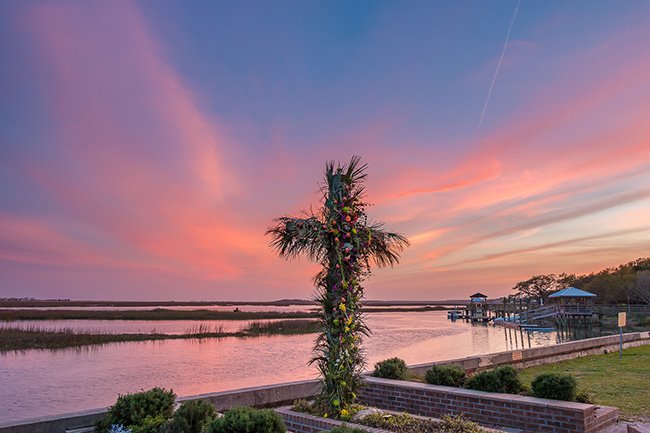 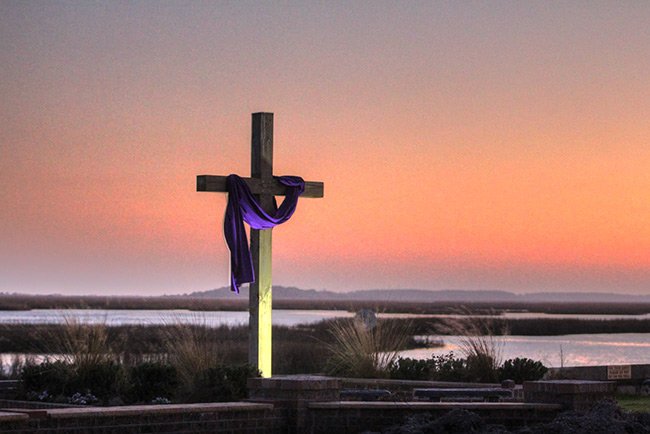 James Pillion of Murrells Inlet © Do Not Use Without Written Consent 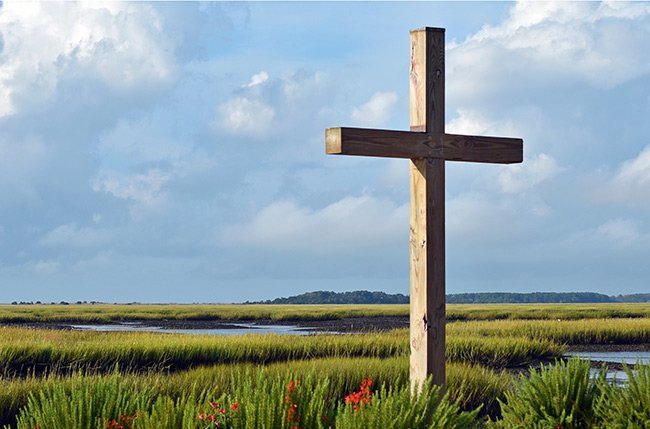 James Pillion of Murrells Inlet © Do Not Use Without Written Consent

Blessing of the Inlet at Belin Memorial

Since 1997, the first Saturday of each May is reserved for the church’s “Blessing of the Inlet” ceremony, when the Murrell’s Inlet community gathers to express their gratitude for the joy of living in a singularly exquisite place. The image below shows the scene. 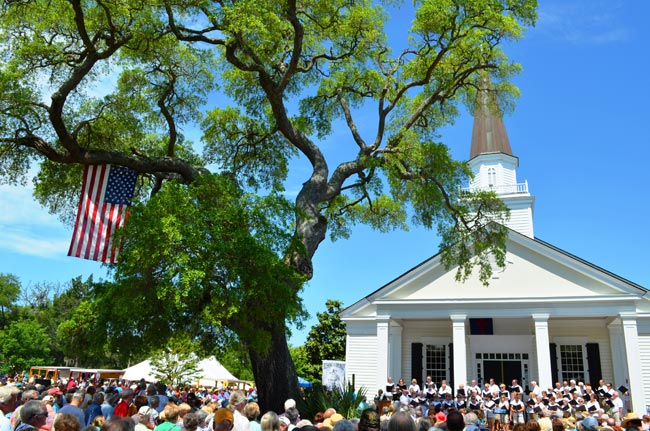 Belin and the Methodist Mission to the Slaves

As mentioned above, Cedar Hill was the Reverend Belin’s summer home. It was part of the larger Wachesaw Plantation, which he also owned.

It is important to note that Methodists originally opposed slavery but eventually came to tolerate it in areas where plantations were prevalent. Writes historian Lynn Michelsohn, “Perhaps as a way to soothe their consciences, they established a Methodist Mission to the Slaves, which rapidly gained support in the Carolina Lowcountry. (1)”

Belin became a passionate advocate for this mission and spent much of his later life ministering to slaves in the Waccamaw Neck. At first he was unable to convince his fellow planters to participate and preached only to his own slaves (1). In time he convinced brothers Francis and Roberts Withers, owners of Springfield Plantation and Brookgreen Plantation respectively (both of which are now part of Brookgeen Gardens), to let him educate their slaves as well (1).

From there others followed, and the Reverend Belin’s role in the mission soon became so prominent that Michelsohn describes it as follows:

[I]t should not be forgotten that in the early years, it was Parson Belin who started this whole movement in our area. For many years it was only he who brought the Christian Gospel to the slaves. He was the one who taught them the hymns of the Methodist Church that they developed into their rich body of Gullah spirituals. He was the one who selected and developed slave religious leaders and even slave preachers who became spiritual and political leaders of their people in the turbulent years that followed.

Alice Belin Flagg died as a young woman, and in the 175 years since, her story has become one of South Carolina’s most famous legends. According to Belin Memorial’s records, Alice is buried in an unmarked grave in the Cedar Hill family cemetery (4). Since Cedar Hill eventually became home to Belin Memorial, her remains likely reside somewhere in the churchyard – not at All Saints, as so many assume. Because there are so many myths about Alice’s short life, we feature a complete guide to the life and death of Alice Flagg.

Artist Tim Matthew, who shares the painting below writes, “My goal through my artwork is to capture the beauty of South Carolina on canvas. I was riding through Murrells Inlet one day and saw this church. Its stunning beauty and location by a marsh attracted me so I stopped to take a few photos. I loved the way the evening light was falling across the church at the time I was there. Back in my studio, I created this painting. I hope it captures the beauty of Belin UMC and also of South Carolina.”

* “The Waccamaw Neck” or “The Neck” refers to the land between the Waccamaw River and the Atlantic Ocean and includes Murrells Inlet, Pawleys Island, and Litchfield Beach. 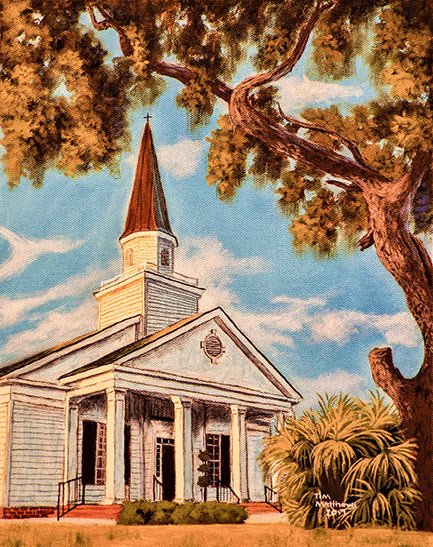 Tim Matthews of Aynor, 2017 © Do Not Use Without Written Consent