This house along the Pee Dee River, south of Chapel Creek, sits on land that was once part of Guendalos Plantation. Around the time of the Civil War, the property was owned by the Allston family, who also owned Brookgreen Plantation before Archer and Anna Huntington purchased it in 1930. 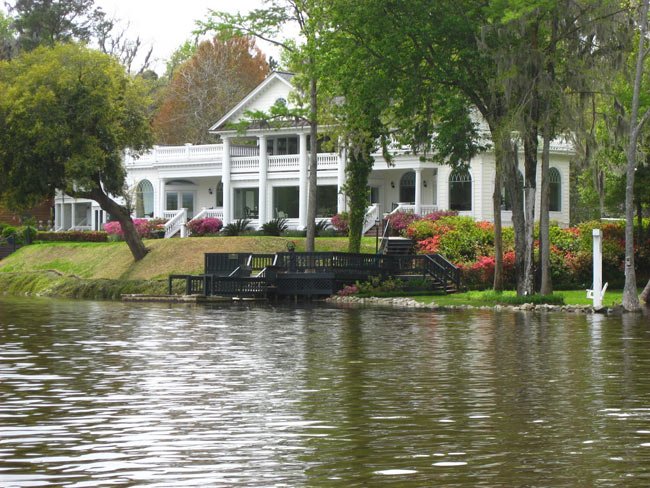 Kathleen Libbey of Myrtle Beach, 2008 © Do Not Use Without Written Consent

In 1857, Guendalos had its most noted owner. It was purchased that year by then-governor Robert Francis Withers Allston for $75,000. (Allston paid $21,000 in cash and took out a mortgage for the remaining $53,500. This price did not include slaves.)

The governor’s primary goal in securing the land was to establish his son as a planter. After the governor’s death in 1864, the plantation was inherited by Ben Allston, a colonel in the Confederacy. In his absence the plantation was managed by an overseer named Joeseph M. Thompson, who policed approximately 120 slaves. Guendalos produced rice as its cash crop.

Though the house itself is not original, Guendalos does feature the remains of former ricefields. Because of this, it is listed on the National Register as part of the Pee Dee River Planters Historic District:

The Pee Dee River Planters Historic District includes extant buildings, structures, and ricefields associated with twelve rice plantations located along the Pee Dee River (Hasty Point, Breakwater, Belle Rive, Exchange, Rosebank, Chicora Wood, Guendalos, Enfield, Birdfield, Arundel, Springfield, Dirleton) and five rice plantations located along the Waccamaw River (Turkey Hill, Oatland, Willbrook, Litchfield, and Waverly). These plantations were part of a large rice culture in the county which flourished from ca.1750 to ca.1910. The rice culture produced most of the rice grown in South Carolina during that period when the colony, and later, the state, was the leader in rice production in America. This district includes four plantation houses (at Exchange, Rosebank, Chicora Wood, and Dirleton); two rice barns (at Hasty Point and Exchange); collections of plantation outbuildings (at Chicora Wood and Arundel); a rice mill and chimney (at Chicora Wood); and historic ricefields with canals, dikes, and trunks. The plantation houses are all frame houses with a central hall plan.