Bright lights against a summer sunset are a familiar sight at Myrtle Beach. The seaside city came into its own as a tourism mecca as early as 1908 when the Myrtle Beach Pavilion – the first of many – was built for the Seaside Inn. That structure burned, and the second pavilion was built in 1923. In fact, the 1920s saw several attractions pop up along the shore, including the Ocean Forest Country Club and the Ocean Drive Pavilion in North Myrtle Beach. Subsequent decades brought the growing resort town the 2nd Avenue Pier in 1936 and the Chesterfield Inn in 1946. In 1948 the iconic Myrtle Beach Pavilion Amusement Park was added to the landscape, where it remained until 2006. Many attractions have come and gone since Myrtle Beach was formally named for the wax myrtle (Morella cerifera) in 1907, but the city remains firmly established as a vacation destination. When Broadway at the Beach (seen below) opened in 1995, the entertainment complex quickly became one of the city’s mainstays. 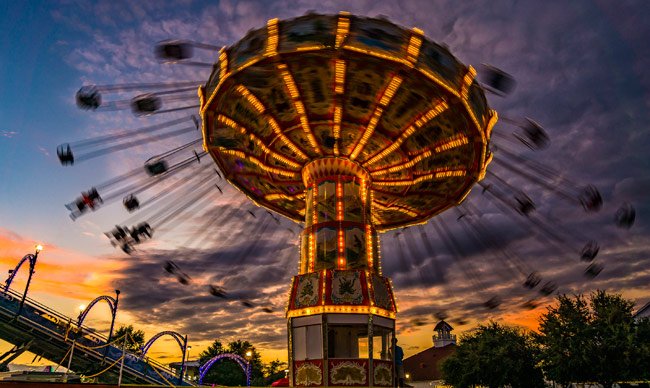 Broadway at the Beach opened in 1995. Previously, music venues such as the Calvin Gilmore Theatre (home of the Carolina Opry) and the Alabama Theatre at Barefoot Landing had opened near the ocean, hailing a rise in the popularity of live performances. While detractors of the development that would become Broadway at the Beach claimed the project was too far away from the beach and would thus pull people from established Ocean Drive businesses, developers Burroughs and Chapin Company pressed on, creating a tourist hub spanning 350 acres. More than 20 years later, Broadway at the Beach has received several recognitions for its contributions to the Myrtle Beach – and South Carolina – tourism industry, including the South Carolina Governor’s Cup in 1997, and it is consistently named a South Carolina Top Attraction. Since it opened in 1995, Ocean Boulevard businesses have also seen an increase in traffic, dispelling fears that the complex would pull commerce from the beachfront attractions. Around 14 million people visit Broadway at the Beach each year. 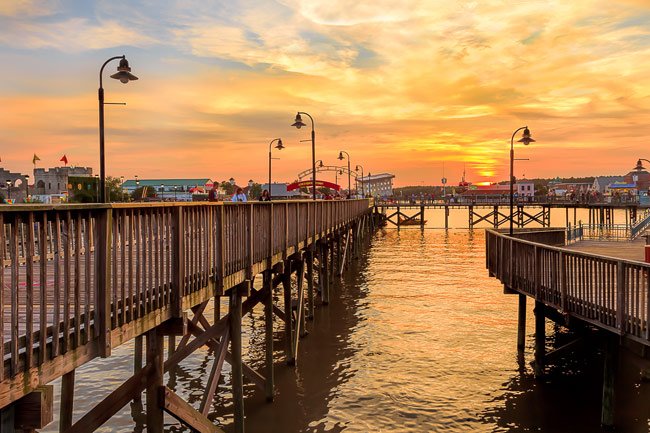 Jay Capilo of Simpsonville, 2012 © Do Not Use Without Written Consent

Among the features enticing people to spend time – and money – at Broadway at the Beach are its many shops and restaurants along with live entertainment such as a comedy club and a piano bar. Visitors can escape the heat at the Myrtle Waves Water Park, spark their curiosity at the WonderWorks Museum, and explore the ocean world at Ripley’s Aquarium. One of the most popular attractions, Pavilion Nostalgia Park, fills the void caused by the demolition of the Myrtle Beach Pavilion Amusement Park in 2006. (Burroughs and Chapin also owned the historic amusement park and leveled it to create condos. However, due in part to the recession of 2008, the land remains vacant. Plans for its future remain unknown.) The park incorporates nostalgic rides from the former amusement park – such as the Wave Swinger seen at the top of this page – with new rides, making the small amusement park one of Broadway at the Beach’s most visited areas.

Reflections on Broadway at the Beach

Contributor David Smith says of his above photo: “This image was taken at Broadway at the Beach on Labor Day Weekend of 2016. I’ve always loved shopping and walking around this beautiful area that encompasses so many fun and animated things. The rides bring back memories of the old Pavilion. That is so important to maintaining that special feeling that keeps the magic and tradition of a Myrtle Beach family vacation alive.

“I wanted to capture the feel of a beautiful afternoon sunset under the swing that made the cover art for the Dave Matthews recording, ‘Under the Table and Dreaming’. It [photo] came out differently, but captured the same feel, I believe. I love capturing motion and lights in long exposure photography. Broadway at the Beach offers an endless opportunity to capture images like this.”

Jay Capilo shares: “I took this picture at Broadway at the Beach in Myrtle Beach during our summer getaway back in 2012. It’s a beautiful place with lots of activities both for adults and kids alike.”

Plan Your Trip: Broadway at the Beach

Broadway at the Beach Map