This Craftsman-style depot in Conway was built in 1928. The one-story board-and-batten structure features wide eaves to protect travelers from the sun and rain. The first railroad to operate from Conway was the Wilmington, Chadbourn, and Conway Railroad, which transported lumber and turpentine to Conway from Wilmington, North Carolina. Ten years later another railroad was added, the Conway, Coast and Western, which delivered goods from Conway to Pine Island near Myrtle Beach. In 1904 the two railroads were connected, and in 1912 they were bought by the Atlantic Coast Line Railroad. The tracks were rerouted in 1928 after the city sued the Atlantic Coast Line Railroad because the line ran down Main Street, interfering with traffic. The present depot was built during the relocation of the tracks. 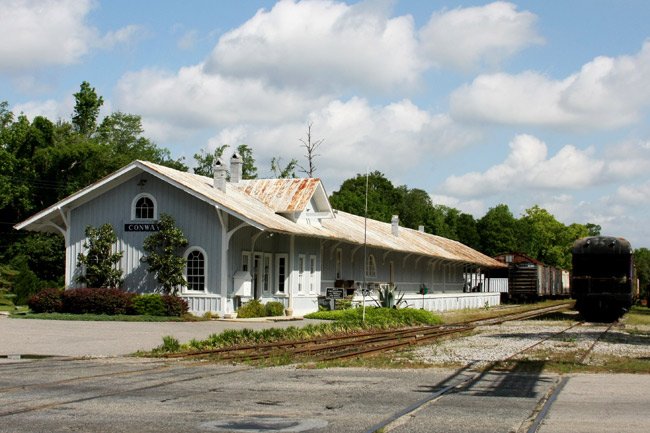 Pete Lawrence of Sumter, 2008 © Do Not Use Without Written Consent

The railroad was later bought by CSX before being acquired by the Horry County Railroad in 1984. In 1987 the name was changed to the Waccamaw Coast Line. In 1995 the line came under the management of the Carolina Southern Railroad, which leased the tracks from the county. In May of 2011, the Federal Railroad Administration found 52 out of 187 of Carolina Southern Railroad’s bridges to be unsafe – seven were considered critical – causing the railroad company to cease operations until the bridges could be repaired. The company repaired the critical bridges and reopened in August of that year. When the bridges were then re-inspected, the FRA again recommended closure of the tracks until all bridges could be repaired. 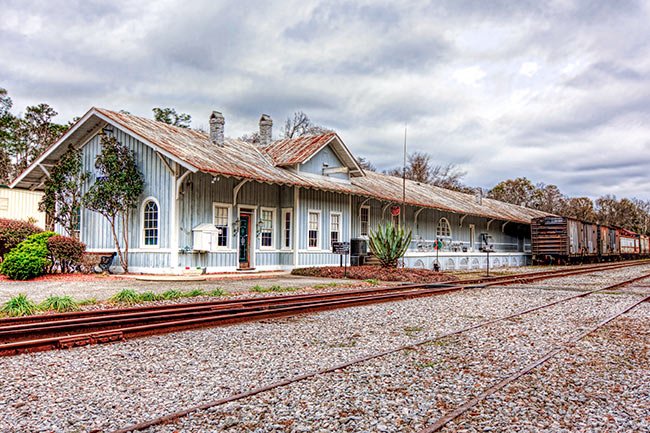 The Atlantic Coast Line Railroad Depot is significant architecturally and for its association with the railroad’s impact on the commercial development and growth of Conway. Constructed in 1928, the Atlantic Coast Line Railroad Depot is a long, rectangular, one-story, gable-roofed, frame board-and-batten building constructed in a craftsman-influenced style. The building features the wide overhanging eaves (to protect passengers and freight from inclement weather) which are typical of railroad depots of the period. Shaped rafter tails and knee braces supporting the eaves are also typical of the craftsman style. The elevation facing the tracks (east) has a slightly projecting, gable-roofed ticket bay at the street end. A raised loading platform extends the rest of the length of the building. The west elevation has a similar treatment with the exception of the ticket bay. The depot was constructed as a result of a lawsuit filed by the city against Atlantic Coast Line, which required the railroad to remove and reroute the tracks on Main Street in 1928.