Those not from Conway may wonder how Kingston Presbyterian Church got its name; however, those from the Horry County seat know the history behind the eponym. The community was established in 1732 on the banks of the Waccamaw River and called Kings Town for King George II, who granted land for the township. Eventually the name was shortened to Kingston before it was changed to Conwayborough, following the Revolutionary War, in honor of local landowner General Robert Conway, who conveyed many of his landholdings to the town. The name of the town was abbreviated to Conway by 1883. Yet while the community was still in its nascence, in 1734, a meeting house was established as a place for its Scots-Irish settlers to worship. 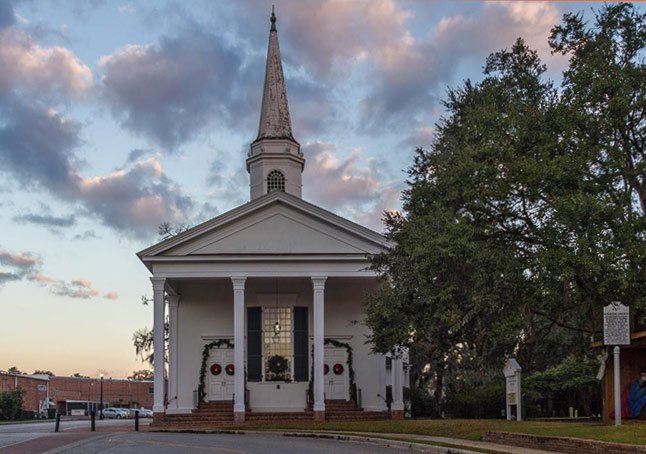 The meeting house was a simple frame building that served the Scots-Irish worshipers of Kingston for many years. By the end of the American Revolution however, the church had dissolved. No Presbyterian church existed in the town until 1855, when a group proposed revitalizing the historic congregation. The proposal was well-received, and soon another frame structure was built in 1858 to house the revived Kingston Meeting House, now called Kingston Presbyterian Church. The church was stuccoed in 1930, the same year a stuccoed brick building was added onto the rear. The present steeple was added in 1962, replacing a late-nineteenth century steeple that was damaged during Hurricane Hazel in 1954.

Kingston Presbyterian Church is listed in the National Register:

The Kingston Presbyterian Church, built in 1858, is significant architecturally as an outstanding example of antebellum Greek Revival ecclesiastical design. The church features a portico set on square columns with recessed panels and square pilasters, a three-bay façade with central triple sash windows of twenty lights each, and flanking double doors with architrave. Kingston Presbyterian Church symbolizes the social and economic success of the village of Kingston, present day Conway. Kingston Township and the village of Kingston were established when the British Crown decreed that a township should be laid out on the Waccamaw River some hundred miles from Charles Town. The name Kingston was chosen in honor of King George II, and the township and village were opened for settlement in 1735.The church building was originally sheathed with weatherboard, but was covered in stucco in 1930 when a stuccoed brick addition was added to the rear. The brick addition was designed by Florence, South Carolina architect Walter D. Harper. The present steeple was added to the building in 1962. The steeple replaced a late nineteenth-century steeple with a rectangular base and a pointed spire containing diamond-shaped, louvered vents, damaged by Hurricane Hazel in 1954. When initially constructed the church, a Greek Revival temple form edifice, had no steeple. The nomination also includes a contributing brick educational building that was constructed in 1956. The educational building, with a two-story Colonial Revival style residential appearance, was designed by the Wilson, North Carolina, architectural firm of Charles C. Benton and Sons.