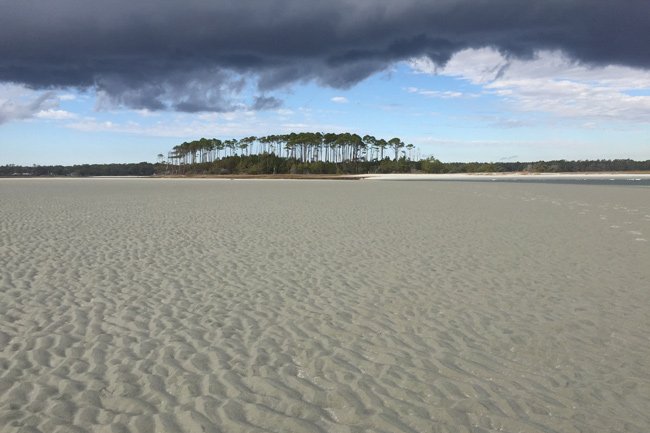 Meridith Grimsley of Greer, 2016 © Do Not Use Without Written Consent

The island is named for William Waties, Jr., a tax collector and Indian trader who discovered and claimed the land in 1735.

There are several discrepancies regarding initial ownership, but the island was eventually acquired by Horace Tighlman, Sr. in 1920.

In 1995, Anne Tilghman Boyce bequeathed over 1,000 acres – about a third of the island – to Coastal Carolina University (1). She also gave the school roughly one-third of the peninsula that adjoins Waties, which is surrounded by Marsh Creek, the Little River Inlet, and the Intracoastal Waterway (1). This land is protected by a conservation easement held by the Nature Conservancy (1). Some of the island is still privately owned by the Tilghman family (1). The family has preserved and protected it for decades (1).

Contributor Meridith Grimsley says of her photo: “I have grown up going to Sunset Beach, North Carolina, and have spent many summers exploring the shores of Bird Island and had only seen Waties island from across Little River inlet. This time we decided to get as close as possible to the island (sans a boat), and this is how we ended up on the north end of Cherry Grove Beach. It was at dead low tide, and a thunderstorm was rolling in over the tops of the trees.”