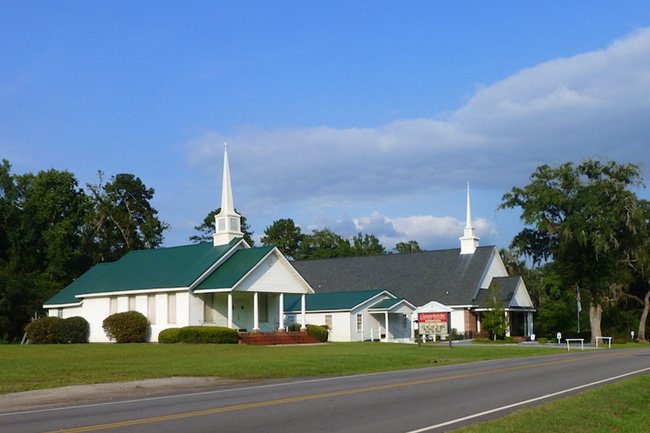 The congregation of Coosawhatchie Baptist Church erected a small building of 20 feet by 16 feet on the southern side of the river in 1769. It was replaced with a larger church following the Revolutionary War. The newer, more ornate church served the congregation until the membership moved to Gillisonville Baptist Church around 1836, using the Coosawhatchie church building as a winter church. Summers spent along the river posed the threat of mosquito-borne illnesses, and many Lowcountry communities evacuated boggy areas during the summer months.

Coosawhatchie Baptist Church, referred to with pride by locals as the “blue cathedral,” was burned by General Sherman’s troops during the Civil War. Following the war, the land on which the former church had stood was donated to former slaves, who built their own church on the property. At this time, the Coosawhatchie Baptist Church was no longer extant, in building or in name.

However, in 1941 two Baptist missionaries from Pennsylvania – the Reverend Albert Dawson and his wife – came to the area to form a new Baptist church, which they christened Coosawhatchie Baptist Church. The area had been without a Baptist church since the war. The current site was donated by R.L. DeLoach, and a sanctuary was subsequently built. Since then the church has grown, new buildings have been added, and Coosawhatchie Baptist Church continues to thrive in this small community by the river.