This seemingly modern house in the Laurens County community known as Hickory Tavern was actually built around 1847 by Laurens businessman and farmer George Washington Sullivan. It was not modernized with electricity until 1950, nor did it have indoor plumbing – with the exception of a kitchen sink – until 1970. The house is notable for its brick construction, unusual in antebellum homes of the Upstate. 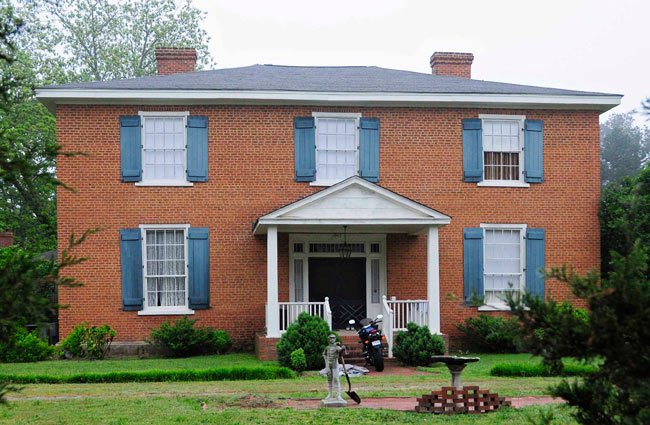 Sullivan, a successful grower of cotton, wheat, and potatoes – among other crops – was also an officer of his father’s company, Fork Shoals Cotton Mill. His home stood out among other plantation houses in the upper part of the state, as bricks were usually reserved for public buildings or churches. Sullivan also served as a state representative from Laurens County during the Civil War, from 1862 until 1864.

Charlton Hall Plantation House is listed in the National Register, which adds the following:

Charlton Hall Plantation House is significant as an intact and relatively uncommon example of mid-nineteenth century brick construction in the rural South Carolina upcountry, and for its association with George Washington Sullivan, Sr., (1809-1887), a prominent farmer and public servant of Laurens District before, during, and after the Civil War. Brick construction in the upcountry prior to upland cotton production and the subsequent expansion it encouraged was limited primarily to buildings for public use such as courthouses or churches or for commercial purposes. Relatively few brick residences were built in Laurens before the Civil War. Sullivan built this house ca. 1847 on part of his extensive land holdings.

The home’s massing and details reflect elements of the Greek Revival style. Sullivan was the principal owner of G.W. Sullivan and Company, which operated a lime kiln, and was an officer in the Fork Shoals Cotton Mill, which had been founded by his father. Sullivan’s farm produced forty, 400-pound bales of ginned cotton, 4000 bushels of Indian corn, 700 bushels of oats, 600 bushels of wheat, 200 bushels of peas and beans, and smaller amounts of sweet potatoes, Irish potatoes, and rye in 1860. Sullivan represented Laurens County in the South Carolina House of Representatives from 1862-1864 and was a Laurens County Commissioner from 1868-1870. Three early-twentieth century outbuildings to the rear of the main house – a blacksmith shop/shed, a smokehouse, and a frame shed – also contribute to the historic character of the property.