Also known as Tumbling Shoals, this structure in Laurens was built in 1838 and architecturally represents the style of home typical of permanent settlers to this region during the early-to-mid nineteenth century. The home, constructed by the Sullivan family, is a full two stories tall and two rooms in width, symmetrically divided with a central hallway. The design was typical of farm houses in the rural south and midwest. 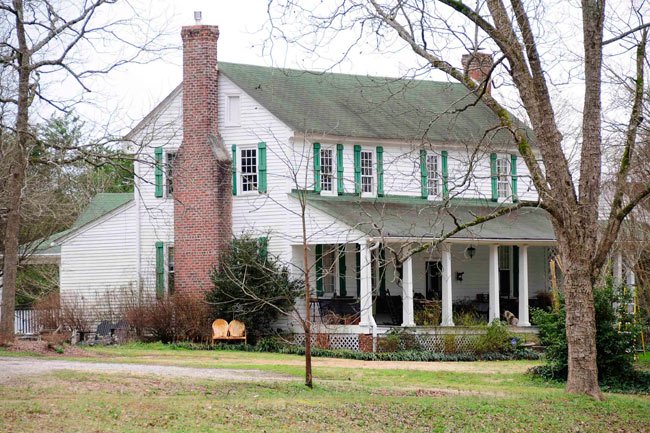 The home is considered a type of “folk house,” meaning it was constructed in a way that is indicative of a particular group of people during a specific time in history. Here, it refers to people – primarily Scots-Irish – who were post-pioneers and remained in the lower Piedmont region as agrarians. According to the National Register of Historic Places, “Folk housing reflects cultural heritage and origins in the same manner as speech, food preferences, and the material cultural inventory.”

The Sullivan House remains in the Sullivan family and is listed in the National Register, which adds the following:

(Tumbling Shoals) The Sullivan House was built in 1838 and typifies the first post-pioneer permanent settlement in the lower Carolina Piedmont. It reflects the origin, diffusion, and economic attainment of the folk settlers of the piedmont during the first half of the nineteenth century. In the Piedmont, the folk house type is a two-story structure, two rooms in length, and one room deep with gables to each side. This is usually a rural dwelling and referred to as an “I-House.” The “I-House,” as typified by the Sullivan House, had its origin in the Middle Atlantic area, notably southern Pennsylvania, and was one of the traits that the settlers carried with them over a wide area.

Since the original two-over-two unit was built in 1838, the house has undergone a number of periodic modifications, but it has not been remodeled or altered to any appreciable degree. The basic integrity of the original structure has been maintained. The modifications have taken the form of appendages that were added to the house one at a time as the family grew in size. Judging from the interior décor, the last room of the house was built or modified during the early part of the twentieth century. The few ruined outbuildings that survive on the property date from the late nineteenth or the twentieth century.