Presbyterian College was founded in 1880 and is located in the town of Clinton. Its beautiful 240-acre campus is a blend of new and historic buildings. The college is a private liberal arts school founded by Dr. William Plumer Jacobs, a Presbyterian minister who came to Clinton to lead the First Presbyterian Church. He began buying land in the area in 1873 to fulfill his vision of starting an orphanage, which opened in 1875. 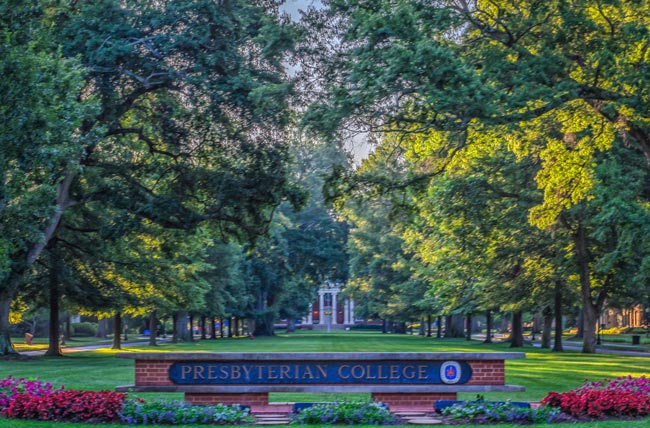 The children’s home initially was called Home of Peace and served ten children. Jacobs later named the home Thornwell Orphanage after Dr. James Henley Thornwell, a minister and seminary professor who had greatly influenced Jacobs while a student at Columbia Theological Seminary. Today the home is called the Thornwell Home and School for Children. 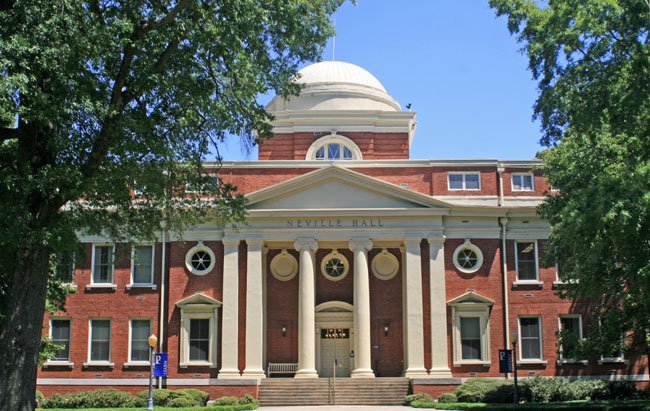 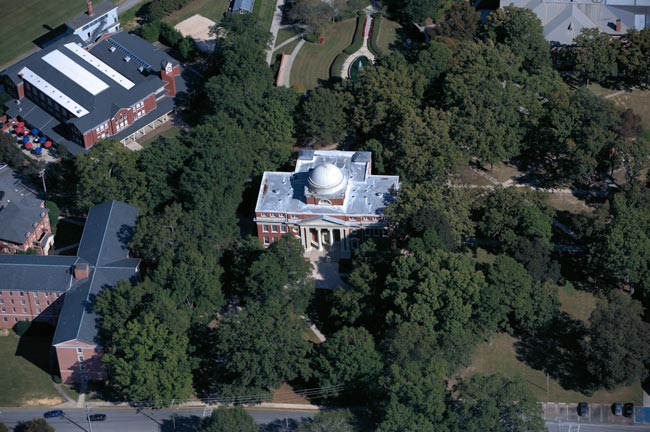 Larry Gleason, Aiken Aerial Photography, 2012 © Do Not Use Without Written Consent

Stately buildings of Georgian and Neoclassical design adorn the campus in their now-iconic red brick, which interestingly recalls the original Columbia Theological Seminary – presently called the Robert Mills House – in Columbia. Newer buildings are complementary with the older ones in both materials and scale, creating a uniform appearance on campus, though the architectural styles vary. The most well-known structure on campus is Neville Hall, pictured in the above two photos, built in 1907. The Georgian Revival academic building was designed by noted architect and Hartsville native Charles Coker Wilson, who also completed the Statehouse that same year. 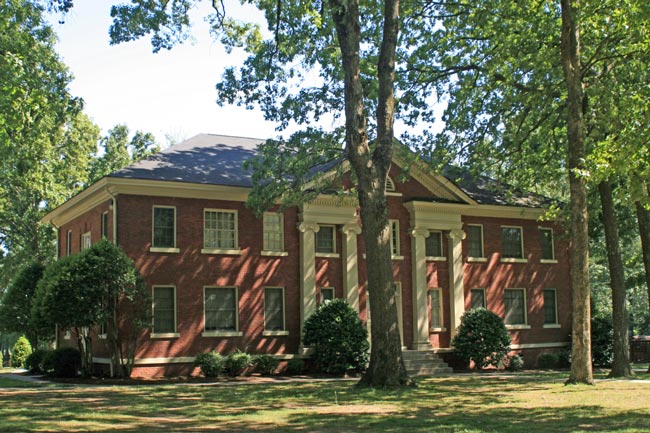 Laurens Hall, seen above, is a student dormitory for women built in 1908, also designed by Wilson. Pictured below is Jacobs Hall, a 1915 academic building that houses the economic and business administration departments as well as ROTC. It is named for founder Dr. William Plumer Jacobs and was the campus library until 1942. 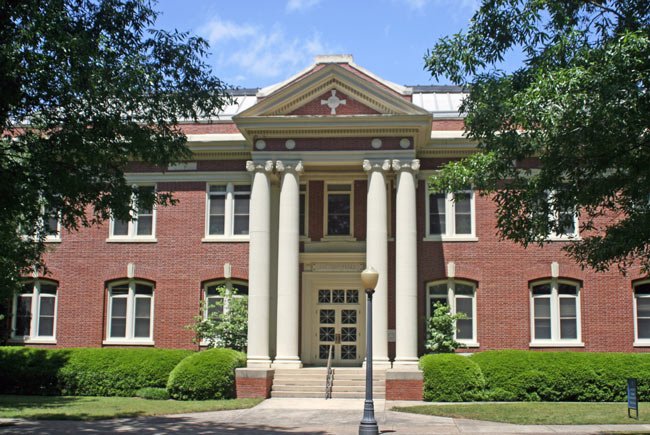 Below is a newer addition to the Presbyterian College campus, Bailey Memorial Stadium. The football stadium, home to the Blue Hose, opened in 2002. It seats up to 6,500 people and includes a press box, a field house, and concession stands. Greeting football fans entering the stadium is a 15-foot-tall bronze statue of the school’s mascot, a Scottish warrior nicknamed Cyrus. 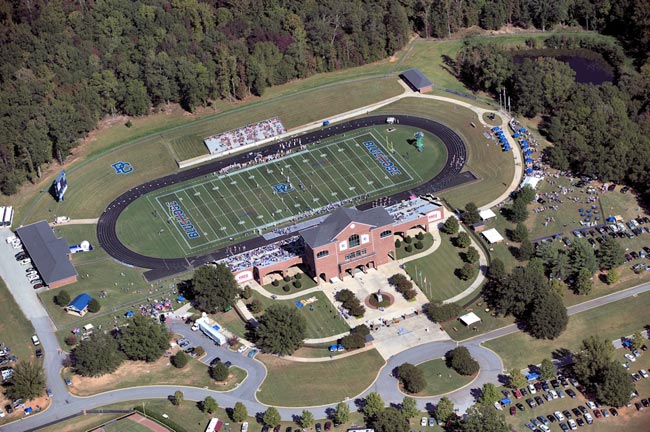 The Doyle Infirmary, seen below, is one of the college’s oldest buildings. Built in 1890, Doyle served as a campus infirmary and later as an alumni hall. Despite efforts from preservations groups and college alumni to save and restore the building, Doyle was condemned and demolished on July 22, 2014. 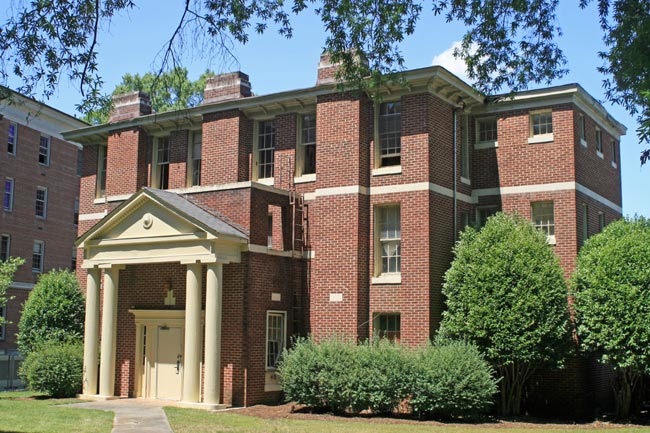 Presbyterian College is affiliated with the Presbyterian Church of the United States of America, also known as PC (USA). However, students of any denomination are invited to apply to the school. Six South Carolina Professors of the Year have come from Presbyterian College, twice as many as any other school in the state. The school also consistently ranks as one of U.S. News and World Report’s Best Colleges in its annual National Liberal Arts Colleges list.

The Thornwell-Presbyterian College Historic District comprises the historic cores of Presbyterian College and the Thornwell Home and School for Children, together with the adjacent residential streets. There are a total of fifty-two buildings and structures within the district. Although the oldest building in the district dates from ca. 1850, the majority of the buildings were constructed in the late nineteenth or early twentieth century, with the emergence of the college and the orphanage. Presbyterian College is unified around the central mall, according to the campus plan drawn in 1912 by the New York City landscape engineer Charles W. Leavitt, Jr. This plan has governed the development of the college; the newer, non-historic buildings on campus are thus rendered more compatible with the old.

Noted Columbia architect Charles Coker Wilson designed Neville Hall, a campus building. Most of the Presbyterian College buildings are of the Georgian Revival style and are built of brick. Other styles represented in the district include Italianate, Romanesque Revival, Colonial Revival, Neo-Classical, Queen Anne, and Bungalow. The Thornwell campus is unified by consistency of materials and by scale; stone construction is used throughout the informal campus. The college and the children’s home are historically connected through Dr. William Jacobs, who was responsible for the founding of both institutions.