Lynchburg Presbyterian Church, located in Lee County‘s South Lynchburg, was founded in 1855 by 21 charter members, along with several slaves and freedmen. Its first pastor was Reverend W. W. Wilson of Ireland. Upon its three acres is also a churchyard with graves dating back to the mid-nineteenth century. 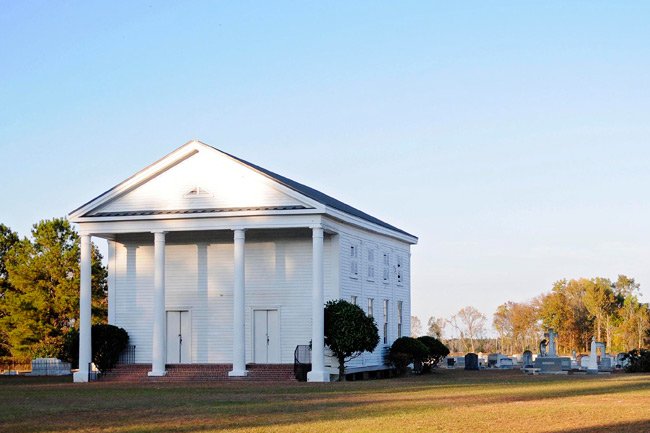 In front of the church, an historical marker reads, “This church was organized in 1855 by 21 charter members who met in the nearby Methodist church. This Greek Revival church, built of hand-hewn pine and featuring galleries on either side, was built that year with the help of their neighbors. Rev. W.W. Wilson, a native of Ireland, served as its first pastor. This church is one of the few buildings still standing from the original town of Lynchburg. When the railroad was built one mile north in 1854 and that area was renamed Lynchburg, this community became South Lynchburg. The church and cemetery were listed in the National Register of Historic Places in 2004.” 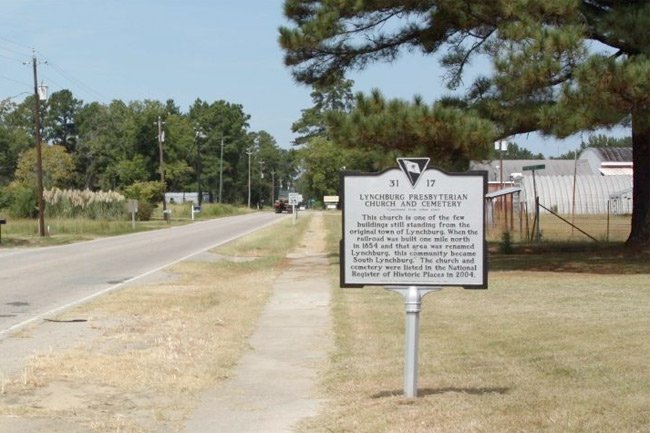 The church is listed in the National Register:

Lynchburg Presbyterian Church, built in 1855, is significant as an excellent example of late antebellum Greek Revival ecclesiastical architecture. It is one of the few antebellum buildings still extant in the original community of Lynchburg (now South Lynchburg). The sanctuary was built by members of the congregation, with the assistance of members of the Lynchburg Methodist Church and several slaves and free blacks as well. The church is a two-story temple-form Greek Revival style building with an engaged tetrastyle portico featuring four massive stuccoed solid brick columns. Set upon an open pier brick foundation and sheathed in six-inch wide weatherboard, the building is a local interpretation of the Tuscan order of architecture. A small triangular-shaped, bifurcated and louvered ventilator interrupts the wide expanse of the portico’s pediment. Corner and wall pilasters adorn each side elevation. The interior is primarily a single room with plaster walls and twenty-one foot high ceiling, undecorated except for a large circular plaster medallion in the center. Paneled wainscoting surrounds the interior space along the outer walls, while a paneled balustraded gallery supported by square pillars with capitals extends along the sides of the interior space. The back half of the church’s three-acre lot is the church cemetery, with randomly placed plots and monuments of various designs and dates from the mid-nineteenth through the late twentieth century.