Emmanuel Community Church was originally known as Fair Hope Presbyterian – a name it retained just shy of a century. Despite its new appellation, the congregation’s core families remain the same. Learn more about the church’s history and evolution below.

This church, located in the Darlington County community of Lamar, was organized as Fair Hope Presbyterian in 1872. It was built on land donated by Captain Joseph Commander, whose family primarily comprised its initial congregation. As the Commander family grew, so too did the church. In 1911, its sanctuary was moved about 200 feet closer to Lynches River Road. (The original site was located near the center of the present graveyard.) At this time, the meeting-house style church was outfitted with a porch, brick columns, and a spire. 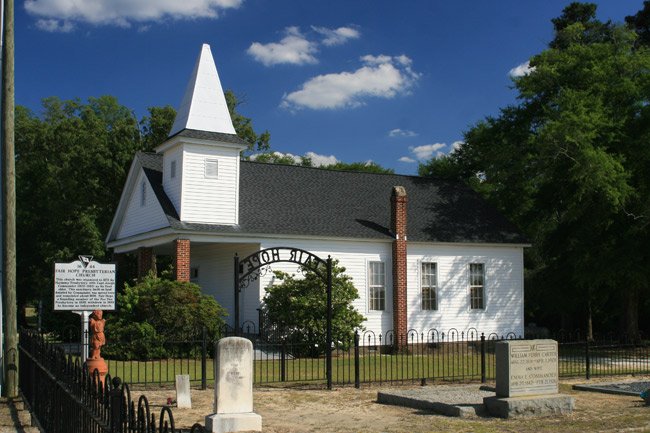 Fair Hope Presbyterian was a founding member of the Pee Dee Presbytery in 1889. However, it was forced to secede from the presbytery in 1969, when the presbytery sought to close the church’s doors due to light membership. Members voted to call their new church Emmanuel Community Church. The move to independence has allowed local families to continue worshipping together, as they have for ages.

Below is an article that was contributed to the South Carolina Picture Project by Bill Segars of Hartsville. It originally appeared in his local paper, The Darlington New & Press. It was published in August of 2015.

We’re back in Darlington County this week, though barely. We have traveled to 1116 East Lynches River Road, southwest of Lamar, between Cartersville (United States Highway 76) and Carters Crossroads (United States Highway 401), on the border of Darlington County, Lee County, and Florence County at Fair Hope Church. I give you this much direction because if you haven’t been to a funeral here, you probably don’t have a clue as to where this church is. Based on the limited location information that I had in 2006, I had a hard time finding it, and I wasn’t going to a funeral.

Fair Hope had its beginning in 1872 as the direct result of one man, or certainly one family, the Commander family. Captain Joseph Commander was born into a Presbyterian family that attended Mount Zion Presbyterian Church in the Sumter District (now Sumter County) in 1800. When he acquired land on the Darlington District side of Lynches River, he found most of his good neighbors to be either Baptist or Methodist. So Captain Commander, a veteran of the War with Mexico, helped form Lynchburg Presbyterian Church in 1855. Keep that church name in mind; you may see it again, because Lynchburg Presbyterian still stands today. The main problem with Lynchburg Presbyterian was its location. In order for the Commander family to get there, they were required to make a fourteen-mile round trip by wagon over bumpy roads and crossing the Lynches River on a ferry each Sunday. This was a trip they made for seventeen years.

As Captain Commander’s family begin to grow through marriage, this long trip became more difficult for the clan to make. His six children married and had children, and a few more local citizens became interested in the Presbyterian religion. In 1872 the Commander family had enough people to form its own church, Fair Hope. There is not a complete list of all of the charter members of Fair Hope, but on the preserved list there are only two names that do not have a direct connection with the Commander name. These are Mr. and Mrs. John Rose and Mrs. Jane Carter. Mrs. Carter may have been kin to Captain Commander’s daughter-in-law. Other local names that you may recognize who did marry into the Commander family are Severance, Scarborough, and Carter. So it’s fair to say that Fair Hope was a family church. Captain Commander lived for eight years after the founding of Fair Hope. He died in 1880 and is buried in the well-maintained Fair Hope graveyard. His son-in-law, Robert Murrell Severance, became the second elder of the Church.

Now, the building itself, this little 30’6″ x 40’4″ church, was built at the time of the congregation’s 1872 organization in the center of the present graveyard, of course on land donated by Captain Commander. There is no record of who built the building. I think that it would be safe to say that the Commander family certainly played a large roll in furnishing the material and labor to erect the building. The original church was built in the typical meeting house style: a small, rectangular, gabled roofed structure with two front doors, clear glass double-hung windows, and a chimney on each side for two pot belly stoves to exhaust the smoke. You can look up “meeting house style” in an architectural dictionary, and you may very well see a picture of Fair Hope’s building.

For an unknown reason, in 1911 the building was moved about 200 feet to the left and closer to the present road. At that time the present 10-foot-deep porch, brick columns, and the steeple were added to the front of the building. As the congregation begin to grow, several other noticeable additions where made to the building to house educational and fellowship space.

Fair Hope has also seen history made here. In 1890 the Pee Dee Presbytery held its annual session here, which proved to be one of the largest gatherings ever held here with standing room only. Then in 1967, Fair Hope selected Mrs. Dorothy Scarborough as a Ruling Elder, the first female Ruling Elder of a Presbyterian church in Darlington County and eastern South Carolina.

With declining membership in early 1969, the strong-willed, determined Commander trait became obvious again when the Presbytery wanted to close Fair Hope due to its small congregation. The members understood but would have no part of the closure or abandonment, because this was their church, the church that they all grew up in and loved. So closing Fair Hope was not an option. After much prayer and soul-searching, their answer came in becoming an independent church. So on April 8, 1969, Fair Hope was chartered as an Independent Church – Emmanuel Community Church – with the Holy Bible as its charter. With this new breath of life, the former Fair Hope continues to serve its loyal membership of the rural community, as it has since 1872.