The Columbia, Newberry, and Laurens Railroad – more commonly known as the CN&L Railroad – was chartered in 1885 as the result of a merger between two pre-Civil War railroads, the Laurens Railroad and the Greenville and Columbia Railroad. The rail line, nicknamed the Dutch Fork Line, traveled 75 miles from the South Carolina Upstate to Columbia, making more than two dozen stops along the way. 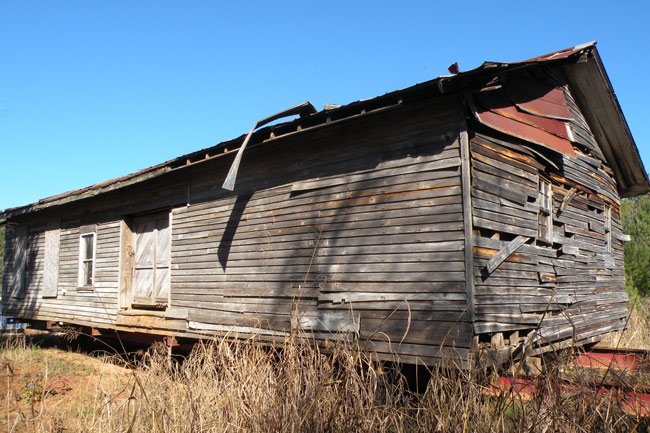 This former depot in Chapin was one such stop. In fact, the town itself is named for Martin Chapin, one of several men instrumental in establishing the railroad. Chapin owned and operated a nearby lumber mill. When the rail line wanted to lay tracks in the area, Chapin gladly sold his land for the project, knowing that the railroad would transport his lumber and increase his business.

The depot originally sat adjacent to the railroad tracks but has twice been moved. Though it is dilapidated, a resident has moved the depot to private property and is hoping to restore the former train station. The map below shows the second location of the depot, which is where the structure sat when this photo was taken in 2009.

Many thanks to Ann Helms for this photo and much of the above information.