This church in the Hebron community outside of Clio was organized in 1845. Before they had their own sanctuary, members worshiped nearby in the community of Beauty Spot. Others traveled three-and-a-half miles from Hebron to Clio (today the area known as Hebron is considered part of Clio). When Colonel John Covington and his wife, Harriet, donated land for a church in Hebron, Moses Meekins was contracted to construct its edifice. The church was added to the property in 1848. 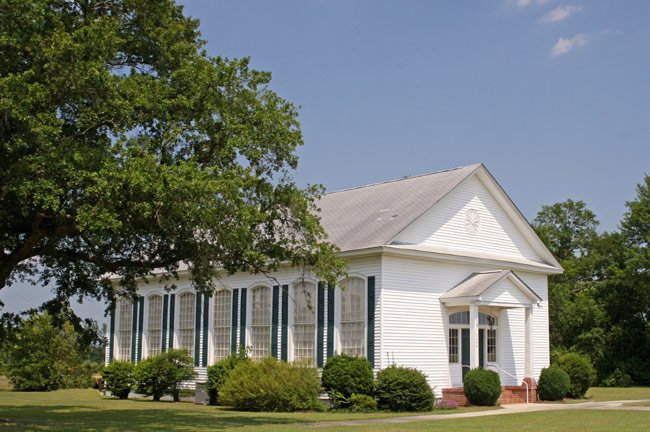 The church grew, and in 1879 the congregation decided to build a larger building. Adjacent land was given by Phillip and Rachel Thomas, and money for materials was raised through donations by church members. Silas Bounds of neighboring Bennettsville was hired as the contractor. By 1880 the new church, seen above, was complete, replacing the previous sanctuary. According to church lore, rather than possessing a center aisle, the church had a wooden partition running through the middle. Women sat on the right side of the partition, while men sat on the left. 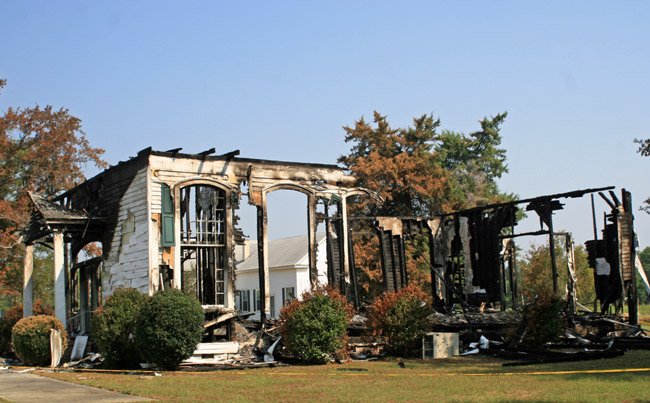 The church continued to serve the members of Hebron Methodist throughout the entire twentieth century and into the early years of the 2000s, undergoing more updates in 2003. However, in the early morning hours of August 12, 2007, the historic church was destroyed in a fire. By the time firefighters reached the scene, the building was past the point of being saved. 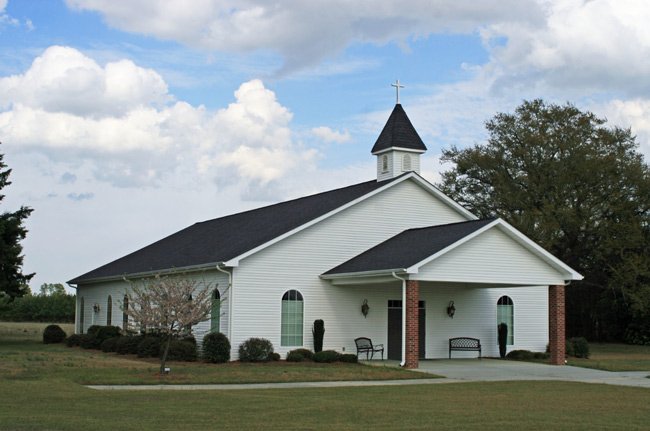 Parishioners worshiped in the Hebron Community Center, which sits adjacent to the church, while plans for a new church were being developed. The new church, seen above, was completed in 2010.

Below is an article that was contributed to the South Carolina Picture Project by Bill Segars of Hartsville. It originally appeared in his local paper, The Darlington New & Press. It was published in November of 2015.

In the Southern Bible Belt there may be many “typical Southern country churches,” but very few exemplify all of the characteristics of that distinction better than Hebron United Methodist, located at 2006 Hebron Dunbar Road outside of Clio. A must for being a “typical Southern country church” is for it to be out in the rural countryside. Hebron certainly suits that because it is located about three miles outside of Clio. For those of you who have never been to Clio, it’s in the country, and imagine going three miles further out.

Hebron is one of the churches that I stumbled upon. I was not looking for it, nor had any idea of finding it. I was simply driving the back roads from Bennettsville to Dillon. Once I saw it, I knew that it was special. I’ve been told, “If you see large, fertile, neatly cultivated agricultural fields, look for a well-maintained church building. Good God-fearing farmers love their church.” Hebron is surrounded by fields of cotton in full bloom.

The meeting house-style building indicated that it may be old. I wasn’t sure until I looked under the building and found large rough sawn timbers. The style of the windows and the glass also suggested late 19th century construction. Not knowing anything more about Hebron, I could only look, think, and photograph its beauty on this trip. Since Hebron was so close to home, I knew that I could do more research, make phone calls to learn more about this jewel and come back later for a more in-depth study.

Melissa Skipper at the Marlboro County Library was very helpful in sending me printed information concerning the history of Hebron. It had its beginning in 1845 as a strong church, drawing members from Beauty Spot and Clio. The Reverend Dennis J. Simmons, the Bennettsville Circuit pastor, dedicated their building built by local carpenter Moses Meekins in 1848. The land was donated by Colonel John Covington and his wife, Harriet. That land is where the present graveyard is. The congregation enjoyed 32 years of growth at this location with the membership peaking at 100 loyal members.

In 1879 the Reverend George T. Harmon and many of the members desired to have a larger building in which to serve the growing congregation. The pride and determination to have a new building started with this desire. Adjoining land was given by Phillip and Rachel Thomas for the new building. A committee was formed very quickly to raise money. A building committee planned the building and chose a builder. All of this planning was accomplished in just a few months; the small band was determined to have a new building.

Silas Bonds of Bennettsville was given the contract to supply all the material and complete the building, with the members’ help, for $1,700. As a fellow builder, I hope Mr. Bonds knew what he was getting into when he asked for help from the members, because “help” is what he got. The members selected the long leaf pine trees based on their straightness to be cut for the building timbers. After the logs were sawed at Neil C. Monroe’s saw mill, the building committee selected the lumber to be used in the construction. Even when the lumber was delivered to the church ground, the committee matched the timbers based on each timber’s grain direction to determine where in the building it would be used. Why did they go to seemly this much trouble? Simple: they wanted their church to be perfect. Nothing was too good for Hebron; after all, they were paying $1,700 of hard-earned money for this building. From a construction standpoint, today this process is not financially feasible. I wish that it were, but typically no one is willing to pay for this intense attention. When the building was completed, Mr. Thomas Chaflin and Mr. Huntley painted the entire 42’x 67′ building for $300.

Through the kindness of William Frasier, a manual pump organ was purchased from Lunden and Bates of Savannah, Georgia and installed in the new building. Due to the fact there was no electricity available, kerosene lamps were hung from the ceiling. The congregation was so proud of the county church building. For the dedication in early 1880, the church invited the South Carolina Methodist Bishop, the Reverend Wightman, to come for the service. He was also impressed with the building as he preached the dedication service.

Behind the church was a row of hitching posts. Be mindful that 1880 was a hard time for most country folks. If they were fortunate to have a horse, they needed a place to secure their horse, and the hitching post is where they did this. This remained for years, even after the invention of the automobile, as a reminder of days gone by.

Hebron’s membership grew through the years, but never had a large congregation. The congregation always felt an allegiance to its building and the sacrifices that were made by its forefathers in order for subsequent generations to enjoy such an accommodating building. This may have been the driving force for the people in this rural area to maintain their building. Vinyl siding has been installed. This wouldn’t have been my choice, but the members were doing what they could to save their building. And save their building they did until 2:00 AM on August 12, 2007, when a passing motorist saw that it was fully involved by fire. By the time the local fire department arrived, it was too late – the roof was falling in as the fire apparatus pulled up on the scene. The ravages of fire was having its way with the old heart pine structure.

The early morning sunlight showed the church’s membership really how devastating the skeletal remains of their beloved Hebron looked. An official investigation ensued with undetermined results, but no foul play was suspected, with some indicators pointing in an electrical direction.

What has happened to the small Hebron congregation since that fateful night in August? The church had offers from neighboring Methodist congregations to come join them, an offer that it accepted, but only in the interim. The congregation was determined to build back on its own Holy Ground, a promise that became a reality in 2010.

What did I learn from Hebron’s loss? We’ve all heard to old saying, “Don’t put off until tomorrow…” You know how it goes. I first visited Hebron on June 6, 2006, vowing to go back some time soon; it was gone after August 12, 2007, before I “found time” to go back. And people ask me, “Why do you research all these churches?” This is not the only “friend” that I’ve lost. I’ve lost so many, I’m now scared to stop, for fear that another one will be lost before I can see and document it.