The Marlboro County Courthouse located in the center of downtown Bennettsville is the fourth courthouse to serve the county and the third built on this site. The first courthouse was built near the Pee Dee River in 1785 after the South Carolina legislature created the county. 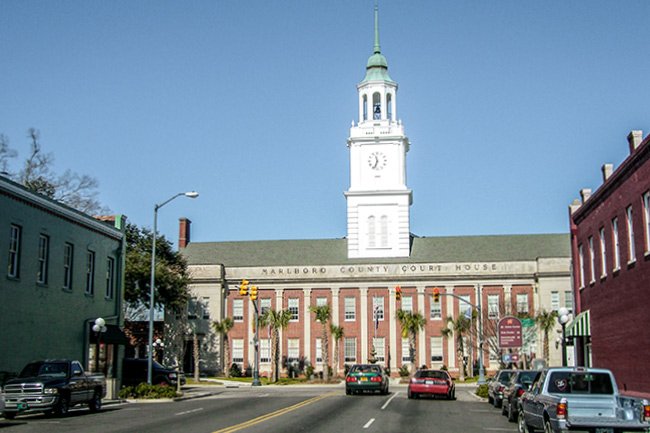 Jimmy Emerson of Dalton, Georgia, 2007 © Do Not Use Without Written Consent

By 1819 the county wanted to move the courthouse to a different location, so a site was chosen “…upon the great road leading from Society Hill to Fayetteville [North Carolina], near Crooked Creek, in or near an old apple orchard on the Lands of John S. Thomas.” After this second courthouse was completed, the town where it was built became the county seat and was called Bennettsville for the newly-elected governor Thomas Bennett, who served in this role from 1820 through 1822.

Two other courthouses were built on this site over the years, one in 1852 that was later occupied by Union troops during the Civil War and the last and current courthouse, completed around 1885. It received extensive renovations in 1951, giving the building its modern look. The courthouse flies six flags representing the county’s heritage: the American, State of South Carolina, Spanish, British, French, and Scottish flags. The Marlboro County Courthouse is listed in the National Register as part of the Bennettsville Historic District, which says the following about the area:

Established as the county seat in 1819, Bennettsville continues to serve as a political and economic center for Marlboro County. The historic district includes the central part of town, where the majority of the residential, commercial, religious, and public buildings date from the late nineteenth and early twentieth centuries. The courthouse continues to be the focal point of the town, although it is the third on the site (built 1885) and was extensively altered in 1951. Bennettsville has numerous excellent examples of residential architecture dating from the early nineteenth to mid-twentieth century.