St. John’s Evangelical Lutheran Church in Walhalla was organized in 1853 by members of Charleston‘s German Colonization Society, which was led by John A. Wagener. 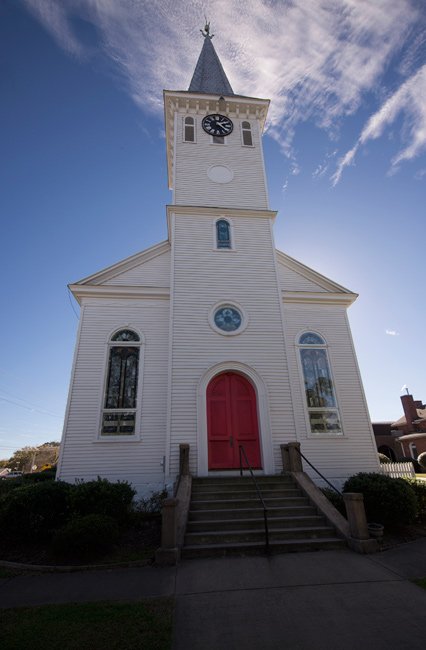 The group wanted to form a German settlement in South Carolina’s Piedmont region. Construction on the building began in 1859 and was completed in early 1861, near the beginning of the Civil War. The builder was renowned German architect John Kaufman. 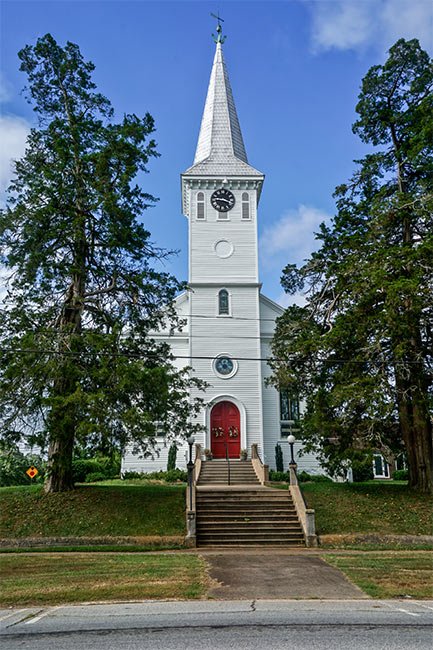 St. John’s Evangelical Lutheran Church is listed in the National Register, which says the following:

(St. John’s German Evangelical Lutheran Church of Walhalla) St. John’s Lutheran Church was constructed between 1859 and 1861 under the direction of John Kaufmann, master builder from Baden, Germany, for the German Lutheran congregation of Walhalla. The church is significant as a frame interpretation of a German vernacular church form, as influenced by the Victorian medieval revival trends. The church is also significant for its role in the religious history of Walhalla.

The church is rectangular in shape, with a tower centered on the façade. An arched entrance with an archivolt door surround is at the base of the tower. The broach spire with the low flared base, and the central tower, projecting from the façade, are elements common to German church architecture from the medieval era to the nineteenth century. The pulpit of “twisted wood” is of the style used by the High German Church. Structurally, the complex arrangement of trusses, collar beams, and braces which support and stabilize the tower, are significant as evidence of the builder’s competence.

A number of charter members of the congregation were members of the German Colonization Society, the organization responsible for the development of Walhalla. Selected from this same group came three intendants, five town wardens, and one state senator, all of which indicates St. John’s had a socially and politically influential congregation, who actively participated in the founding and management of the town of Walhalla.